Jekyll and Hyde Planet Found: Hellish Lava World Is Molten on the Hot Side, Solid on the Cool Side

The most detailed map of a small, rocky ‘super Earth’ to date reveals a two-faced planet almost completely covered by lava, with a molten ‘hot’ side and solid ‘cool’ side.

An international team of astronomers, led by the University of Cambridge, has obtained the most detailed ‘fingerprint’ of a rocky planet outside our solar system to date, and found a planet of two halves: one that is almost completely molten, and the other which is almost completely solid.

According to the researchers, conditions on the hot side of the planet are so extreme that it may have caused the atmosphere to evaporate, with the result that conditions on the two sides of the planet vary widely: temperatures on the hot side can reach 2500 degrees Celsius, while temperatures on the cool side are around 1100 degrees. The results are reported in the journal Nature. 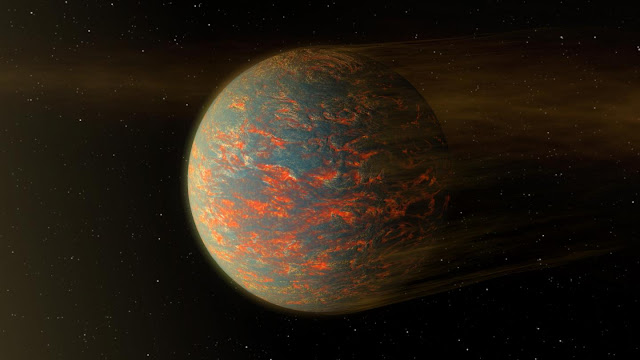 Using data from NASA’s Spitzer Space Telescope, the researchers examined a planet known as 55 Cancri e, which orbits a sun-like star located 40 light years away in the Cancer constellation, and have mapped how conditions on the planet change throughout a complete orbit, the first time this has been accomplished for such a small planet.

55 Cancri e is a ‘super Earth’: a rocky exoplanet about twice the size and eight times the mass of Earth, and orbits its parent star so closely that a year lasts just 18 hours. The planet is also tidally locked, meaning that it always shows the same face to its parent star, similar to the Moon, so there is a permanent ‘day’ side and a ‘night’ side. Since it is among the nearest super Earths whose composition can be studied, 55 Cancri e is among the best candidates for detailed observations of surface and atmospheric conditions on rocky exoplanets.

Uncovering the characteristics of super Earths is difficult, since they are so small compared to the parent star and their contrast relative to the star is extremely small compared to larger, hotter gas giant planets, the so-called ‘hot Jupiters’.

“We haven’t yet found any other planet that is this small and orbits so close to its parent star, and is relatively close to us, so 55 Cancri e offers lots of possibilities,” said Dr Brice-Olivier Demory of the University’s Cavendish Laboratory, the paper’s lead author. “We still don’t know exactly what this planet is made of – it’s still a riddle. These results are like adding another brick to the wall, but the exact nature of this planet is still not completely understood.”

55 Cancri e has been extensively studied since it was discovered in 2011. Based on readings taken at different points in time, it was thought to be a water world, or even made of diamond, but researchers now believe that it is almost completely covered by lava.

“We have entered a new era of atmospheric remote sensing of rocky exoplanets,” said study co-author Dr Nikku Madhusudhan, from the Institute of Astronomy at Cambridge. “It is incredible that we are now able to measure the large scale temperature distribution on the surface of a rocky exoplanet.”

Based on these new infrared measurements, the ‘day’ side of the planet appears to be almost completely molten, while the ‘night’ side is almost completely solid. The heat from the day side is not efficiently circulated to the night side, however. On Earth, the atmosphere aids in the recirculation of heat, keeping the temperature across the whole planet within a relatively narrow range. But on 55 Cancri e, the hot side stays hot, and the cold side stays cold.

According to Demory, one possibility for this variation could be either a complete lack of atmosphere, or one which has been partially destroyed due to the strong irradiation from the nearby host star. “On the day side, the temperature is around 2500 degrees Celsius, while on the night side it’s about 1100 degrees – that’s a huge difference,” he said. “We think that there could still be an atmosphere on the night side, but temperatures on the day side are so extreme that the atmosphere may have evaporated completely, meaning that heat is not being efficiently transferred, or transferred at all from the day side to the night side.”

Another possibility for the huge discrepancy between the day side and the night side may be that the molten lava on the day side moves heat along the surface, but since lava is mostly solid on the night side, heat is not moved around as efficiently.

What is unclear however, is where exactly the ‘extra’ heat on 55 Cancri e comes from in the first place, since the observations reveal an unknown source of heat that makes the planet hotter than expected solely from the irradiation from the star – but the researchers may have to wait until the next generation of space telescopes are launched to find out.

For Demory, these new readings also show just how difficult it will be to detect a planet that is similar to Earth. The smaller a planet is, the more difficult it is to detect. And once a rocky planet has been found, there is the question of whether it lies in the so-called habitable zone, where life can be supported. “The problem is, people don’t agree on what the habitable zone is,” said Demory. “For example, some studies consider Mars and Venus to be in the habitable zone, but life as we know it is not possible on either of those planets. Understanding the surface and climate properties of these other worlds will eventually allow us to put the Earth’s climate and habitability into context.”

One possibility might be to look at stars which are much cooler and smaller than our sun, such as the M-dwarfs, which would mean that planets could be much closer to their star and still be in the habitable zone. The sizes of such planets relative to their star would be larger, which make them more detectable from Earth.

But for the time being, Demory and his colleagues plan to keep studying 55 Cancri e, in order to see what other secrets it might hold, including the possibility that it might be surrounded by a torus of gas and dust, which could account for some of the variations in the data. And in 2018, the successor to Hubble and Spitzer, the James Webb Space Telescope, will launch, allowing astronomers to look at planets outside our solar system with entirely new levels of precision.