Astronomers using the unique ultraviolet capabilities of the NASA/ESA Hubble Space Telescope have identified nine monster stars with masses over 100 times the mass of the Sun in the star cluster R136. This makes it the largest sample of very massive stars identified to date. The results, which will be published in the Monthly Notices of the Royal Astronomical Society, raise many new questions about the formation of massive stars.

An international team of scientists using the NASA/ESA Hubble Space Telescope has combined images taken with the Wide Field Camera 3 (WFC3) with the unprecedented ultraviolet spatial resolution of the Space Telescope Imaging Spectrograph (STIS) to successfully dissect the young star cluster R136 in the ultraviolet for the first time.

R136 was originally listed in a catalogue of the brightest stars in the Magellanic Clouds compiled at the Radcliffe Observatory in South Africa. It was separated into three components a, b, c at the European Southern Observatory, with R136a subsequently resolved into a group of eight stars (a1-a8) at ESO, and confirmed as a dense star cluster with the NASA/ESA Hubble Space Telescope after the first servicing mission in 1993.

R136 is only a few light-years across and is located in the Tarantula Nebula within the Large Magellanic Cloud, about 170 000 light-years away. The young cluster hosts many extremely massive, hot and luminous stars whose energy is mostly radiated in the ultraviolet. This is why the scientists probed the ultraviolet emission of the cluster.

Very massive stars are exclusive to the youngest star clusters because their lifetimes are only 2-3 million years. Only a handful of such stars are known in the entire Milky Way galaxy.

As well as finding dozens of stars exceeding 50 solar masses, this new study was able to reveal a total number of nine very massive stars in the cluster, all more than 100 times more massive as the Sun. However, the current record holder R136a1 does keep its place as the most massive star known in the Universe, at over 250 solar masses. The detected stars are not only extremely massive, but also extremely bright. Together these nine stars outshine the Sun by a factor of 30 million.

The image shows the central region of the Tarantula Nebula in the Large Magellanic Cloud. The young and dense star cluster R136 can be seen at the lower right of the image. This cluster contains hundreds of young blue stars, among them the most massive star detected in the Universe so far.  Using the NASA/ESA Hubble Space Telescope astronomers were able to study the central and most dense region of this cluster in detail. Here they found nine stars with more than 100 solar masses. 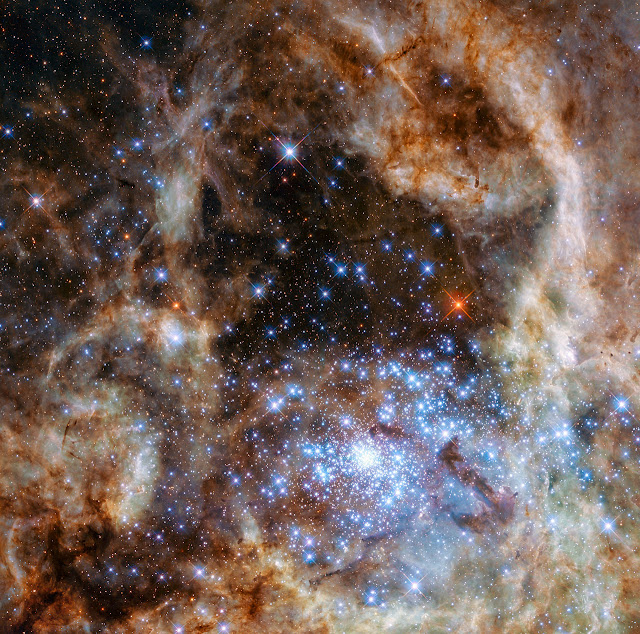 The scientists were also able to investigate outflows from these behemoths, which are most readily studied in the ultraviolet. They eject up to an Earth mass of material per month at a speed approaching one percent of the speed of light, resulting in extreme weight loss throughout their brief lives.

“The ability to distinguish ultraviolet light from such an exceptionally crowded region into its component parts, resolving the signatures of individual stars, was only made possible with the instruments aboard Hubble,” explains Paul Crowther from the University of Sheffield, UK, and lead author of the study. “Together with my colleagues, I would like to acknowledge the invaluable work done by astronauts during Hubble’s last servicing mission: they restored STIS and put their own lives at risk for the sake of future science!”

STIS’s capabilities were restored in 2009 by astronauts who successfully completed Serving Mission 4 (SM4), one of the Hubble’s most challenging and intense servicing missions, involving five spacewalks.

In 2010 Crowther and his collaborators showed the existence of four stars within R136, each with over 150 times the mass of the Sun. At that time the extreme properties of these stars came as a surprise as they exceeded the upper-mass limit for stars that was generally accepted at that time. Now, this new census has shown that there are five more stars with more than 100 solar masses in R136. The results gathered from R136 and from other clusters also raise many new questions about the formation of massive stars as the origin of these behemoths remains unclear.

The ultraviolet signatures of even more very massive stars have also been revealed in other clusters — examples include star clusters in the dwarf galaxies NGC 3125 and NGC 5253. However, these clusters are too distant for individual stars to be distinguished even with Hubble.

Saida Caballero-Nieves, a co-author of the study, explains: “There have been suggestions that these monsters result from the merger of less extreme stars in close binary systems. From what we know about the frequency of massive mergers, this scenario can’t account for all the really massive stars that we see in R136, so it would appear that such stars can originate from the star formation process.”

The left side of this collage shows the central part of the young star cluster R136 as it can be seen in the ultraviolet. Due to the high-resolution of Hubble in the ultraviolet the individual stars in this dense cluster can be resolved and studied.

The right side shows a pseudo-image, created from the UV spectra collected with the Space Telescope Imaging Spectrograph (STIS). These spectra have been used by scientists to determine the properties of the stars in R136. The boundary of the 17 slit locations is outlined in white in the left image. The long-slit data from the spectrograph have been compressed to the width of the slits and stacked to create a pseudo-image. This allows the slit locations to be matched to stars in the left image. 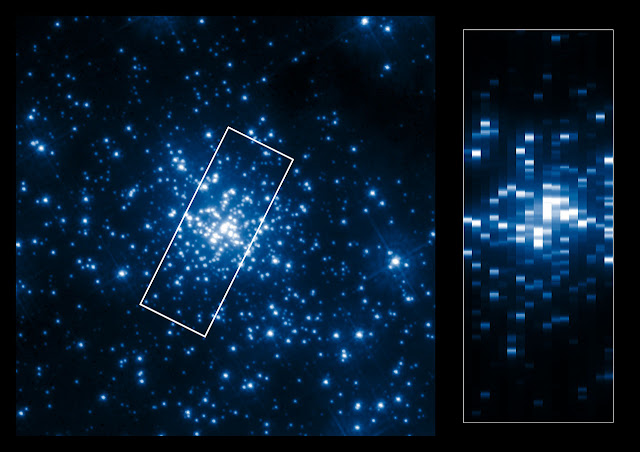 In order to find answers about the origin of these stars the team will continue to analyse the gathered datasets. An analysis of new optical STIS observations will also allow them to search for close binary systems in R136, which could produce massive black hole binaries which would ultimately merge, producing gravitational waves.

“Once again, our work demonstrates that, despite being in orbit for over 25 years, there are some areas of science for which Hubble is still uniquely capable,” concludes Crowther.