An electrical and systems engineer at Washington University in St. Louis has designed a method that, figuratively, forces a leopard to change its spots.

Jr-Shin Li, the Das Family Distinguished Career Development Associate Professor in Electrical & Systems Engineering in the School of Engineering & Applied Science, has devised a unified mathematical framework to design a single, global input, or waveform, that is able to inspire a population of nonlinear, rhythmic units ubiquitous in nature and manmade systems.

A global control signal is capable of selectively steering the complex chemical reaction into chosen spatial patterns, in this example, between shapes of letters 'O' and 'K' (in blue). 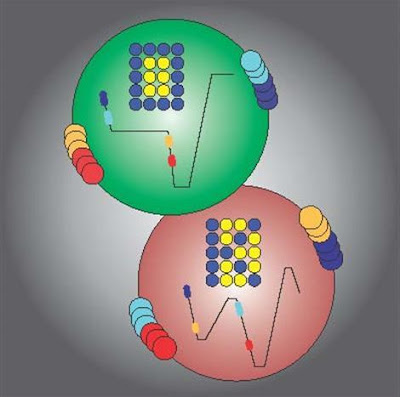 The theory has been shown on a nickel multi-electrode array (the leopard) to form first one pattern, the letter O, then a short while later switches to another pattern, the letter K, and then returns to the initial pattern O again. Each pixel in the letter is a chemical reaction.

The significance of the study is the contribution to advance the ensemble control theory with the development of effective computational algorithms, that will enable researchers to better understand and control oscillation in a variety of important application domains, such as heart pacemakers, neuronal firings in the brain and circadian timekeeping. Getting the 20 oscillatory reactions on an array to switch patterns is an example of "entraining" abundant, often similar dynamical systems simultaneously by a single command, or input.

The phenomenon of oscillation is nicely illustrated with the arrival of fireflies in summer. Fireflies oscillate in a barely perceptible pattern to most observers until they eventually are all communicating on the same wavelength, pulsing simultaneously. During the oscillation phenomenon, after a chemical reaction, the chemical products often oscillate in different frequencies (faster or slower).

"In many applications, it's beneficial to synchronize these oscillators," Li said. "So we apply the input to make things synchronized."

"We've come up with a unified, systematic theory that will work on any nonlinear oscillating system," Li said. "Mathematically, it works for any number, be it 20 or 2,000 or more." 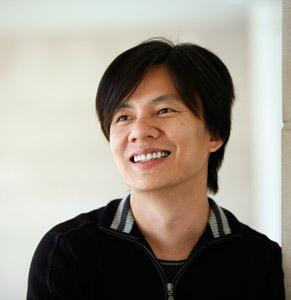 Li's collaborator at Saint Louis University, Istvan Z. Kiss, the Arts & Sciences Associate Professor of Chemistry, has said that it is feasible to show any desired phase pattern changes in an ensemble of up to 120 chemical oscillatory reactions in his laboratory; however, extensions to thousands -- or millions -- of reactions are theoretically possible. The results published in Nature Communications are thought to be a breakthrough of a successful pattern switching in nonlinear oscillators following a global input.

"The paper shows that this is possible both theoretically and experimentally," Li said.

While the method works in synchronization, it also works in cases where de-synchronization is desired. In Parkinson's disease, for instance, the part of the brain where the disease rears its ugly head is pathologically synchronized when it's not supposed to be. In theory, Li's waveform, applied directly to the brain, would desynchronize a certain population of neurons that work together pathologically to give Parkinson's disease sufferers their characteristic tremor.

Li is exploring with Erik Herzog, PhD, professor of biology in Arts & Sciences at Washington University, how his input, or control, can be used to regulate circadian systems, or biological clocks.

The waveform in circadian systems is the use of light to change the synchronization behavior of circadian (biological clock) systems. Each circadian cell might have a different clock, and one of the goals of this research is to entrain all of the circadian clocks to just one clock.

"This has a potential application in mitigating jet lag," Li said.

Li's theory of ensemble control can design a control input, often referred to as a waveform, or "pulse," something like a conductor leading an orchestra. It has the ability to drive a great number of nuclear spins with different frequencies in nuclear magnetic resonance (NMR) spectroscopy, steering the whole diverse ensemble of nuclear spins from any initial state to any desired target state to enable a clearer magnetic resonance image for medical diagnosis.

In robotics, Li's theory can design single control inputs that simultaneously would make numerous robots in a system obey the same command. He collaborates with researchers across disciplines in the areas of quantum mechanics, neuroscience, computer science, biology, biomedical engineering and robotics.

Li's next step in entrainment of ensemble systems is to implement his method in biological and neuroscience systems to see whether it can make inroads in deep brain stimulation, the state-of-the art Parkinson's disease treatment, aimed at controlling the characteristic trembling of patients. In these areas, "complexity and uncertainty are the challenges," Li said. "They are much more difficult to control than chemicals, which are physical systems."