Researchers at Ben-Gurion University of the Negev (BGU) and Helmholtz Centre for Environmental Research (UFZ) in Leipzig, Germany are unraveling the mystery behind what causes "fairy circles." Recently discovered in the uninhabited Australian outback, fairy circles were thought to exist only in Africa.

According to a new study in the PNAS journal (Proceedings of the National Academy of Sciences), the research team found new evidence that these barren circular patches of land -- previously thought to exist only in the dry Namibia grassland of southern Africa -- occur due to the way plants organize themselves in response to water shortage. 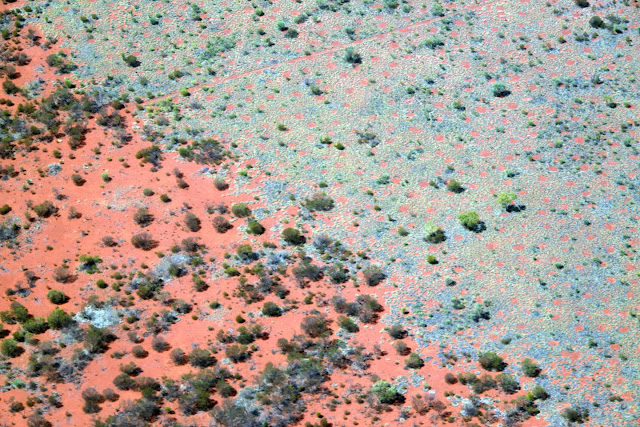 
Up to now, scientists offered several theories to explain the honeycomb-like pattern formed by these circles, which have long been considered one of nature's greatest mysteries. Some believed termites or ants nibble away at the roots of the grasses and kill them. Others suspected toxic carbon monoxide gas may rise from the earth under the circles and kill the vegetation.

But the discoveries documented in the March, 2016 study corroborate a third, self-organization theory, which shows the amount of water available at the transition between desert and grassland is not enough for continuous vegetation cover. As a result, individual plants compete for precious water and organize themselves in this highly irregular characteristic grass carpet with large holes that provide water to the surrounding vegetation.

The reported study consists of an empirical component, led by Dr. Stephan Getzin of UFZ in collaboration with Dr. Hezi Yizhaq and Prof. Itzhak Katra from BGU, and a theoretical part, led by Prof. Ehud Meron of BGU in collaboration with Dr. Hezi Yizhaq and Ph.D. students Yuval R. Zelnik and Omer Tzuk. The researchers combined fieldwork, remote sensing, spatial pattern analysis, mathematical modeling, and model analysis to demonstrate that the observed fairy circle patterns are self-organizing and are driven by positive biomass-water feedbacks that take place simultaneously throughout the whole system, and are not related to termite activity.

"Using model simulations we were able to show that the Australian fairy circle gap patterns share similar characteristics with model-produced patterns," Prof. Meron explains. "Furthermore, we showed that the formation of the patterns is driven by a positive feedback between vegetation growth and water transport toward the growth location, very much like in the Namibian ecosystem, as we found in an earlier study (Y. Zelnik, E. Meron, G. Bel, PNAS2015).

"However, the two ecosystems differ in the water transport mechanism: below-ground soil-water diffusion in Namibia and above-ground water flow in Australia. The appearance of similar vegetation patterns in distinct ecosystems that exhibit different pattern-formation mechanisms is a manifestation of a central universality principle of pattern-formation theory, and provides further support for the applicability of this theory to water-limited ecosystems."

UFZ researcher Dr. Stephan Getzin, an early supporter of the termite hypothesis who changed his view following the recent advance in understanding vegetation patchiness as a self-organization phenomenon, has conducted extensive aerial-view studies of fairy circle landscapes. "The interesting thing about fairy circles is they are spread with great regularity and homogeneity, even over vast areas, but they occur only within a narrow rainfall belt," Getzin explains.

"This is consistent with model predictions that gap (fairy circle) patterns should appear in a limited precipitation range; above this range uniform vegetation prevails and below that range morphological changes to stripe and spot patterns take place," adds Meron.

To investigate the phenomenon more closely, Getzin went to Australia with his BGU counterpart, Hezi Yizhaq. The scientists measured the barren circles, compared their surface temperatures with those of vegetated areas, and charted indications of ants and termites in four parts of the almost uninhabited region. They also observed how the water drained away in these areas and took soil samples that were later analyzed in a BGU lab by Prof. Itzhak Katra.

Analyzing this data, the researchers concluded that the barren patches in Australia are not produced by animal activities. "In Australia, in the majority of cases, we found no nests in the circles. Unlike in Namibia, cryptic sand termites do not exist in Australia," Getzin says. "And the ones we did find have a completely different distribution pattern to the fairy circles."

Fairy circles, as observed in Namibia and now in Australia, are fascinating and intriguing pattern-formation phenomena. Unlike equally fascinating patterns in inanimate systems, however, self-organizing patterns in ecology may also have important implications for ecosystem function, especially in highly variable environments as we witness today.

A recent book by Prof. Meron, Nonlinear Physics of Ecosystems (CRC Press 2015), elaborates on these questions using the powerful concepts and mathematical tools of pattern formation theory. Among the questions addressed are how pattern formation affects desertification transitions, interspecific interactions and biodiversity, and the restoration of degraded landscapes.