Girls who eat red meat often start their periods on average five months earlier than those who don't.

Conversely, girls who consume fatty fish like tuna and sardines more than once a week have their first menstrual cycle, or menarche, significantly later than those who eat it once a month or less, according to research by the University of Michigan. 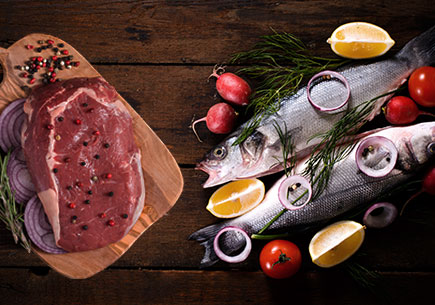 The investigators from the U-M School of Public Health measured the usual diet of 456 girls 5-to-12 years old in Bogota, Colombia, before they had started menstruating. The girls were then followed for just under six years. During this time, they were asked whether they had had their first period. The girls were part of the Bogota School Children Cohort, a longitudinal research project that has examined many issues of nutrition and health.

Red meat consumed by the girls ranged from less than four times a week to twice a day. The girls who ate the most red meat started their periods at a median age of 12 years 3 months, whereas those who ate it less frequently started at 12 years 8 months. Those who ate fatty fish most frequently began at 12 years 6 months.

Five months may not sound like a lot but it is a significant number when talking about a population study, the researchers said.

"It is an important difference because it is associated with the risk of disease later in life," said first author Erica Jansen, a doctoral candidate in the U-M School of Public Health. "It is significant because few dietary factors are known to affect the timing of puberty. This finding may also contribute to explain why red meat intake early in life is related to increased risk of breast cancer later in life."

In addition to breast cancer, early onset of puberty has been associated with heart disease, obesity and type II diabetes.

"We cannot conclude that there is necessarily a causal role of red meat on onset of puberty from this study. However, there is a mounting body of evidence suggesting that excessive intake of red meat at different stages of life is related to a number of adverse health outcomes, especially to getting some types of cancer," said senior author Dr. Eduardo Villamor, professor of epidemiology at the U-M School of Public Health.

Villamor noted that earlier puberty also often results in other public health concerns such as earlier sexual activity, teen pregnancy, and alcohol and tobacco use.

Other studies have shown a link between consuming animal protein and advanced puberty, and examined the role of red meat on disease, but this is the first to specifically look at red meat intake in childhood and early menarche.

"Although animal protein intake during childhood is important for growth and development, some sources of animal protein may be healthier than others," Villamor said.

"We don't know what specific components of red meat could cause early menarche. It could be the protein or some micronutrients naturally present in red meat, byproducts that are created during manufacturing or packaging of cured meats or during cooking, or substances that are fed to cattle."