Two comets that will safely fly past Earth later this month may have more in common than their intriguingly similar orbits. They may be twins of a sort.

Comet P/2016 BA14 was discovered on Jan. 22, 2016, by the University of Hawaii's PanSTARRS telescope on Haleakala, on the island of Maui. It was initially thought to be an asteroid, but follow-up observations by a University of Maryland and Lowell Observatory team with the Discovery Channel Telescope showed a faint tail, revealing that the discovery was, in fact, a comet.

Close Comet and Large Magellanic Cloud : Sporting a surprisingly bright, lovely green coma Comet 252P/Linear poses next to the Large Magellanic Cloud in this southern skyscape. The stack of telephoto exposures was captured on March 16 from Penwortham, South Australia. Recognized as a Jupiter family periodic comet, 252P/Linear will come close to our fair planet on March 21, passing a mere 5.3 million kilometers away. That's about 14 times the Earth-Moon distance. 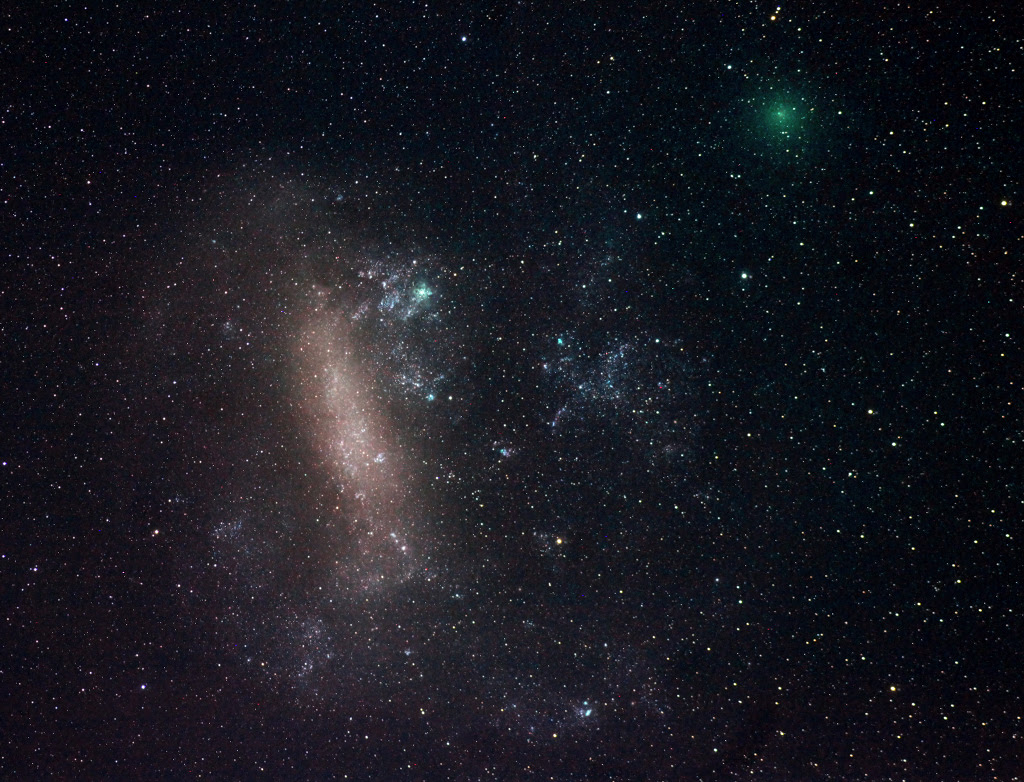 In fact, it is one of two comets that will make remarkably close approaches in the next few days as a much fainter Comet Pan-STARRS (P/2016 BA14) comes within 3.5 million kilometers (9 times the Earth-Moon distance) on March 22. The two have extremely similar orbits, suggesting they may have originally been part of the same comet. Sweeping quickly across the sky because of their proximity to Earth, both comets will soon move into northern skies

The orbit of this newly discovered comet, however, held yet another surprise. Comet P/2016 BA14 follows an unusually similar orbit to that of comet 252P/LINEAR, which was discovered by the Massachusetts Institute of Technology's Lincoln Near Earth Asteroid Research (LINEAR) survey on April 7, 2000. The apparent coincidence may be an indication of twin nature in that comet. P/2016 BA14 is roughly half the size of comet 252P/LINEAR and might be a fragment that calved off sometime in the larger comet's past.  252P/LINEAR is predicted to perhaps make a weak new meteor shower during its 2016 approach.

On March 2, 2016, P/2016 was only a 16th-magnitude blip, but it's expected to brighten rapidly in the coming nights, perhaps reaching 12th magnitude during closest approach. Meanwhile, its compadre comet, 252P/LINEAR, has grown an expansive coma and can be seen in binoculars from southern latitudes. "Comet P/2016 BA14 is possibly a fragment of 252P/LINEAR. The two could be related because their orbits are so remarkably similar," said Paul Chodas, manager of NASA's Center of NEO Studies (CNEOS) at the Jet Propulsion Laboratory in Pasadena, California. "We know comets are relatively fragile things, as in 1993 when comet Shoemaker-Levy 9 was discovered and its pieces linked to a flyby of Jupiter. Perhaps during a previous pass through the inner-solar system, or during a distant flyby of Jupiter, a chunk that we now know of as BA14 might have broken off of 252P."

Observations made by the Hubble Space Telescope of comet 252P/LINEAR, and by NASA's Infrared Telescope Facility of comet P/2016 BA14 will further investigate their possible twin nature.

The CNEOS website has a complete list of recent and upcoming close approaches, as well as all other data on the orbits of known NEOs, so scientists and members of the media and public can track information on known objects.