The effect of aging on cognitive processes such as learning, memory and logical reasoning have so far been studied almost exclusively in people.

Using a series of touchscreen tests, Lisa Wallis and Friederike Range of the Messerli Research Institute at Vetmeduni Vienna have now studied these domains in pet dogs of varying ages. The study was conducted with 95 Border Collies ranging in age from five months to 13 years. The dogs regularly came to the Clever Dog Lab on the Vetmeduni Vienna campus accompanied by their owners to conduct the tests on a touch-sensitive monitor.

The dogs were trained to touch symbols on a screen using their nose. 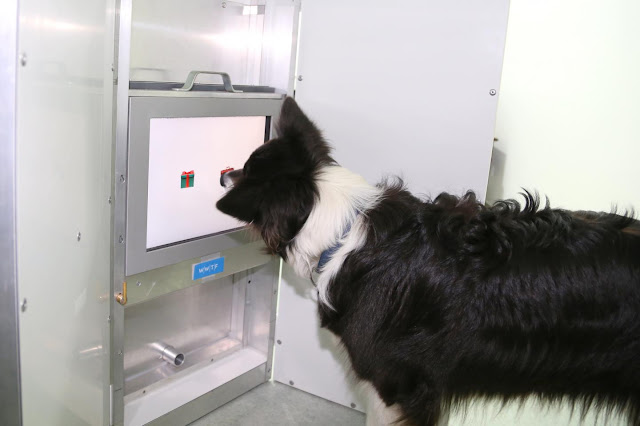 "Border Collies have a reputation for being fast learners. They were bred over generations for characteristics that are important in shepherding. In recent years they have become a popular breed of pet dog, probably because they are so easy to train. This is why we had access to enough test animals from this breed," explains study director Friederike Range.

The dogs were divided into five age groups and tested in four tasks. These were designed to test three cognitive abilities: learning, logical reasoning and memory.

The tests revealed differences in cognitive ability depending on the age of the dogs. The first part required the animals to learn to correctly select four from a total of eight abstract pictures on a touchscreen. The dogs were shown two pictures on the screen at a time. One picture had a positive association - the dogs were rewarded with a food treat for touching this picture - while the second picture had a negative association - touching this picture did not result in a treat but in a time-out. The four "positive" pictures were presented in different combinations with the "negative" pictures.

"Older dogs required more trials than younger ones before they were able to solve the task correctly. The test also showed that older dogs are less flexible in their way of thinking than younger ones. As in people, older dogs find it more difficult to change old habits or what they have learned," explains Lisa Wallis, the study's first author.

After the Border Collies reached a learning criterion they were again shown two pictures on the touchscreen. This time, one of the pictures was new for the animals. The second one was familiar from the previous test where it had a negative association. The dogs should identify it as the "wrong" one. The novel picture would therefore be the "correct" one. Hence, the dogs had to choose through inference by exclusion.

"The older the dog, the better it performed, while younger dogs were unable to master this task. This is probably due to the fact that older dogs more stubbornly insist on what they have learned before and are less flexible than younger animals," says Range.

Long-term memory for touchscreen stimuli is not affected by age

Six months after the first learning tests, the researchers repeated the touchscreen trials using the same eight abstract pictures as before in order to test the dog's long-term memory skills. The test revealed no significant age differences. Nearly all dogs remembered the correct pictures as positive.

The results of this study provide measures associated with normal cognitive aging in Border collies, and thus could be used as a basis for breed comparisons as well as early recognition and treatment of certain cognitive deficits.