HITS astrophysicists are using new methods to simulate the common-envelope phase of binary stars and discovering dynamic irregularities that may help to explain how supernovae evolve.

When we look at the night sky, we see stars as tiny points of light eking out a solitary existence at immense distances from Earth. But appearances are deceptive. More than half the stars we know of have a companion, a second nearby star that can have a major impact on their primary companions.

The interplay within these so-called binary star systems is particularly intensive when the two stars involved are going through a phase in which they are surrounded by a common envelope consisting of hydrogen and helium. Compared to the overall time taken by stars to evolve, this phase is extremely short, so astronomers have great difficulty observing and hence understanding it. This is where theoretical models with highly compute-intensive simulations come in. Research into this phenomenon is relevant understanding a number of stellar events such as supernovae.

The simulation video visualizes the evolution of the density during a time span of 105 days. As the core of the red giant and the companion draw closer together, the gravity between them releases energy that passes into the common envelope. The turbulent instabilities that occur during this phase become clearly evident. (\
Video: Sebastian Ohlmann / HITS

Using new methods, astrophysicists Sebastian Ohlmann, Friedrich Roepke, Ruediger Pakmor, and Volker Springel of the Heidelberg Institute for Theoretical Studies (HITS) have now made a step forward in modeling this phenomenon. As they report in The Astrophysical Journal Letters, the scientists have successfully used simulations to discover dynamic irregularities that occur during the common-envelope phase and are crucial for the subsequent existence of binary star systems. These so-called instabilities change the flow of matter inside the envelope, thus influencing the stars' distance from one another and determining, for example, whether a supernova will ensue and, if so, what kind it will be.

This image shows a slice through the three-dimensional simulation volume after 105 days in the common envelope. In the orbital plane (figure 1), the companion star and the red giant core are circling around each other. 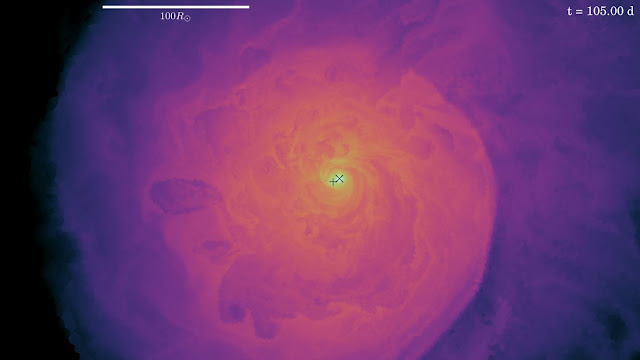 The article is the fruit of collaboration between two HITS research groups, the Physics of Stellar Objects (PSO) group and the Theoretical Astrophysics group (TAP). Prof. Volker Springel's Arepo code for hydrodynamic simulations was used and adapted for the modeling. It solves the equations on a moving mesh that follows the mass flow, and thus enhances the accuracy of the model.

More than half the stars we know of have evolved in binary star systems. The energy for their luminosity comes from the nuclear fusion of hydrogen at the core of the stars. As soon as the hydrogen fueling the nuclear fusion is exhausted in the heavier of the two stars, the star core shrinks. At the same time, a highly extended stellar envelope evolves, consisting of hydrogen and helium. The star becomes a red giant.

The path to stellar explosion

Sebastian Ohlmann of the PSO group explains why this common-envelope phase is important for our understanding of the way various star systems evolve: "Depending on what the system of the common envelope looks like initially, very different phenomena may ensue in the aftermath, such as thermonuclear supernovae."

Figure 2 shows a plane perpendicular to the orbital plane. 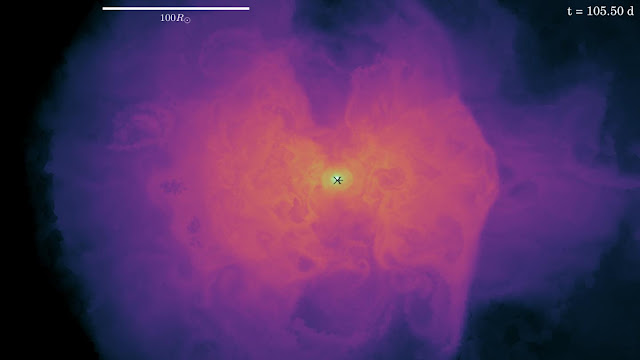 Ohlmann and colleagues are investigating the run-up to these stellar explosions, which are among the most luminous events in the universe and can light up a whole galaxy. But modeling the systems that can lead to such explosions is bedeviled by major uncertainty in the description of the common-envelope phase.

One of the reasons for this is that the core of the giant is anything between a thousand and ten thousand times smaller than the envelope, so that spatial and temporal scale differences complicate the modeling process and make approximations necessary. The methodically innovative simulations performed by the Heidelberg scientists are a first step towards a better understanding of this phase.