The Prolonged Death of Light from Type Ia Supernovae

Three years after its explosion, a type Ia supernova continues to shine brighter than expected, new research finds. The observations, made with the Hubble Space Telescope and published today in The Astrophysical Journal, suggest that the powerful explosions produce an abundance of a heavy form of cobalt that gives the heat from nuclear decay an extra energy boost. The work could help researchers pinpoint the parents of type Ia supernovae--a type of stellar explosion that is frequently used to measure distances to faraway galaxies--and reveal the mechanics behind these explosions.

AMNH researchers make a discovery about the chemical composition of Type Ia supernovae, which may aid in the understanding of how these stars explode—and become the “standard candles” by which we measure the distance of far-off galaxies.
Credit: American Museum of Natural History

"Type Ia supernovae became very important to physics, as a whole, a couple of decades ago when they were used to show that the expansion of the universe is accelerating," said lead author Or Graur, a research associate in the American Museum of Natural History's Department of Astrophysics and a postdoctoral researcher at New York University. "Yet we still do not know exactly what type of star system explodes as a type Ia supernova or how the explosion takes place. A lot of research has gone into these two questions, but the answers are still elusive."

Current research indicates that type Ia supernova explosions originate from binary star systems--two stars orbiting one another--in which at least one star is a white dwarf, the dense remains of a star that was a few times more massive than our Sun. The explosion is the result of a thermonuclear chain reaction, which produces a large amount of heavy elements.

A Hubble Space Telescope image of galaxy NGC 4424, which is about 50 million light years away, and close-ups of the type Ia supernova the research team observed. In the upper left, the difference in the brightness of the supernova is shown about a year apart. 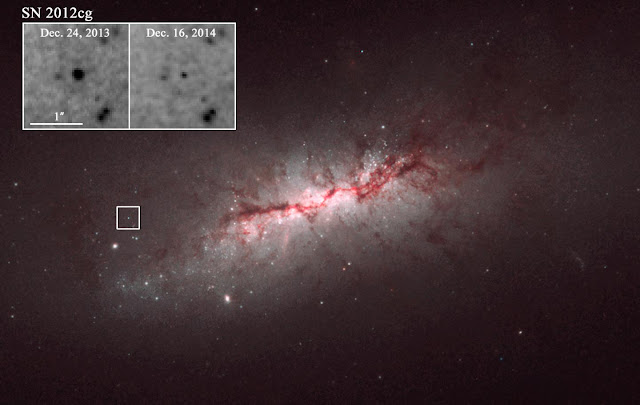 The light that researchers see when a type Ia supernova explodes comes from the radioactive decay of an isotope of nickel (56Ni) into an isotope of cobalt (56Co) and then into a stable isotope of iron (56Fe). Although peak brightness is reached relatively quickly, and most researchers stop watching supernovae after about 100 days past the beginning of the explosion, the light continues to radiate for years.

Previous studies predicted that about 500 days after an explosion, researchers should see a sharp drop-off in the brightness of these supernovae, an idea called the "infrared catastrophe." However, no such drop-offs have been observed, so Ivo Seitenzahl, a researcher at the Australian National University and the ARC Centre of Excellence for All-sky Astrophysics and one of the co-authors on the paper, predicted in 2009 that it must be due to the radioactive decay of 57Co. This is a heavier isotope of cobalt with a longer half-life than 56Co, and it is expected to provide an extra energy source that would kick in around two to three years after the explosion.

The researchers tested the prediction directly by using the Hubble Space Telescope to observe the type Ia supernova SN 2012cg more than three years after it exploded in the galaxy NGC 4424, which is about 50 million light years away--nearby in astronomical terms.

"We saw the supernova's brightness evolve just as Ivo predicted," Graur said. "Interestingly, though, we found that the amount of 57Co needed to produce the observed brightness was about twice the amount expected. These two pieces of information provide fresh constraints on progenitor and explosion models. Stated differently, we now have a new piece in the puzzle that is type Ia supernovae, one of the most important tools in modern cosmology."

"When we made our prediction in 2009, I was skeptical whether clues for the presence of 57Co in type Ia supernovae would be observed in my lifetime," Seitenzahl said. "I am absolutely thrilled that now, only seven years later, we are already constraining explosion scenarios based on our measurements."

There is one caveat to the results: The excess brightness measured by the researchers could be due to a phenomenon known as a "light echo" instead of 57Co. A light echo happens when light from an explosion interacts with a large dust cloud, which scatters the light in all directions. In that case, light from the explosion would reach Earth twice: once directly from the supernova and then many years later as the result of the echo. To rule out the possibility of the light coming from an echo, more observations will have to be made of type Ia supernovae that are closer to Earth.