Breanna Binder, a University of Washington postdoctoral researcher in the Department of Astronomy and lecturer in the School of STEM at UW Bothell, spends her days pondering X-rays.

As she and her colleagues report in a new paper published Feb. 12 in the Monthly Notices of the Royal Astronomical Society, they recently solved a mystery involving X-rays — a case of X-rays present when they shouldn’t have been. This mystery’s unusual main character — a star that is pretending to be a supernova — illustrates the importance of being in the right place at the right time.

The galaxy NGC 300, home to the unusual system Binder and her colleagues studied. The spiral galaxy is over 6 million light years away. 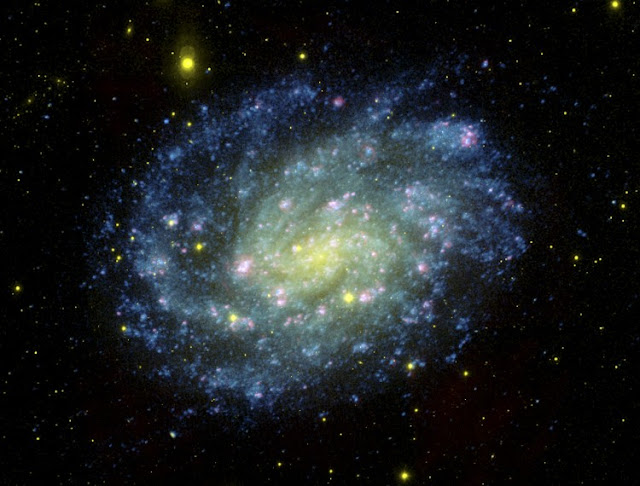 Such was the case in May 2010 when an amateur South African astronomer pointed his telescope toward NGC300, a nearby galaxy. He discovered what appeared to be a supernova — a massive star ending its life in a blaze of glory.

“Most supernovae are visible for a short time and then — over a matter of weeks — fade from view,” said Binder.

After a star explodes as a supernova, it usually leaves behind either a black hole or what’s called a neutron star — the collapsed, high-density core of the former star. Neither should be visible to Earth after a few weeks. But this supernova — SN 2010da — still was.

“SN 2010da is what we call a ‘supernova impostor‘ — something initially thought to be a supernova based on a bright emission of light, but later to be shown as a massive star that for some reason is showing this enormous flare of activity,” said Binder.

Many supernova impostors appear to be massive stars in a binary system — two stars in orbit of one another. Stellar astrophysicists think that the impostor’s occasional flare-ups might be due to perturbations from its neighbor.

For SN 2010da, the story appeared to be over until September 2010 — four months after it was confirmed as an impostor — when Binder pointed NASA’s Chandra X-ray Observatory toward NGC300 and found something unexpected. 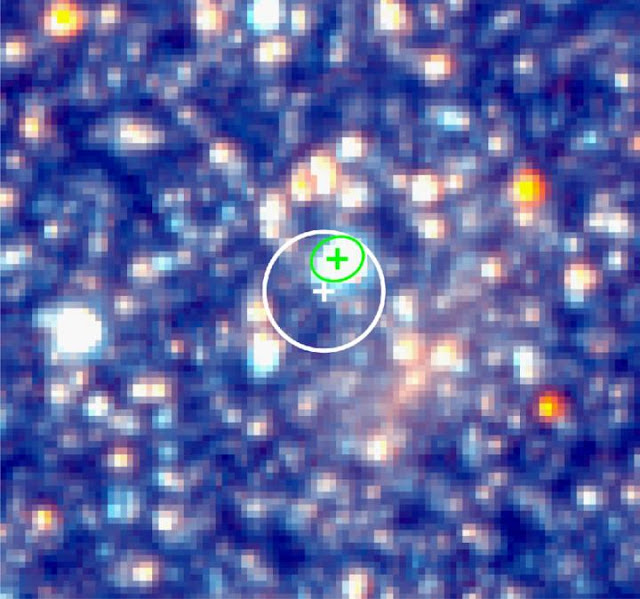 “There was just this massive amount of X-rays coming from SN 2010da, which you should not see coming from a supernova impostor,” she said.

Binder considered a variety of explanations. For example, material from the star’s corona could be hitting a nearby dust cloud. But that would not produce the level of X-rays she had observed. Instead, the intensity of the X-rays coming from SN 2010da were consistent with a neutron star — the dense, collapsed core remnant of a supernovae.

“A neutron star at this location would be surprising,” said Binder, “since we already knew that this star was a supernova impostor — not an actual supernova.”

In 2014, Binder and her colleagues looked at this system again with Chandra and, for the first time, the Hubble Space Telescope. They found the impostor star and those puzzling X-ray emissions. Based on these new data, they concluded that, like many other supernovae impostors, SN 2010da likely has a companion. But, unlike any other supernovae impostor binary reported to date, SN 2010da is probably paired with a neutron star.

“If this star’s companion truly is a neutron star, that would mean that the neutron star was once a giant, massive star that underwent its own supernova explosion in the past,” said Binder. “The fact that this supernova event didn’t expel the other star, which is 20 to 25 times the mass of our sun, makes this an incredibly rare type of binary system.”

To understand how this unusual binary system could form, Binder and her colleagues considered the age of the stars in this region of space. Looking at stellar size and luminosity, they discovered that most nearby stars were created in two bursts — one 30 million years ago and the other less than 5 million years ago. But neither SN 2010da nor its presumed neutron star companion could’ve been created in the older burst of starbirth.

“Most stars that are as massive as these usually live 10 to 20 million years, not 30 million,” said Binder. “The most massive, hottest stars can form, grow, swell, explode and leave a neutron star emitting X-rays in about 5 million years.”

Surveys of the galaxy as recently as 2007 and 2008 detected no X-ray emissions from the location of SN 2010da. Instead, Binder believes that the X-rays they first found in 2010 represent the neutron star “turning on” for the first time after its formation. The X-rays are likely produced when material from the impostor star is transferred to the neutron star companion.

“That would mean that this is a really rare system at an early stage of formation,” said Binder, “and we could learn a lot about how massive stars form and die by continuing to study this unique pairing.”

One mystery solved, Binder would like to keep looking at SN 2010da, seeing what else she can learn about its formation and evolution. Its home galaxy, which has yielded unique pairings previously, is sure to keep her busy. She is also planning a follow-up study of other recent supernova impostors with the help of an undergraduate research assistant at UW Bothell.

Co-authors on the paper included UW astronomy professor Ben Williams, Albert Kong at the National Tsing Hua University, Terry Gaetz and Paul Plucinsky at the Harvard-Smithsonian Center for Astrophysics, Evan Skillman at the University of Minnesota and Andrew Dolphin at Raytheon. Their work was funded by NASA.


Contacts and sources:
James Urton
University of Washington
on February 15, 2016