Although historically seen as solitary animals, new research being presented here shows sharks may have a more complex social structure than previously thought. Using tracking devices to trace the movements of individual animals in the open ocean, researchers found that Sand Tiger sharks form complex social networks that are typically seen in mammals but rarely observed in fish.

Sand Tiger sharks congregate together in the shallow waters of the Delaware Bay in summertime. Researchers at the University of Delaware in Lewes use acoustic tags to track the movements of individual Sand Tigers in the open ocean throughout the rest of the year. 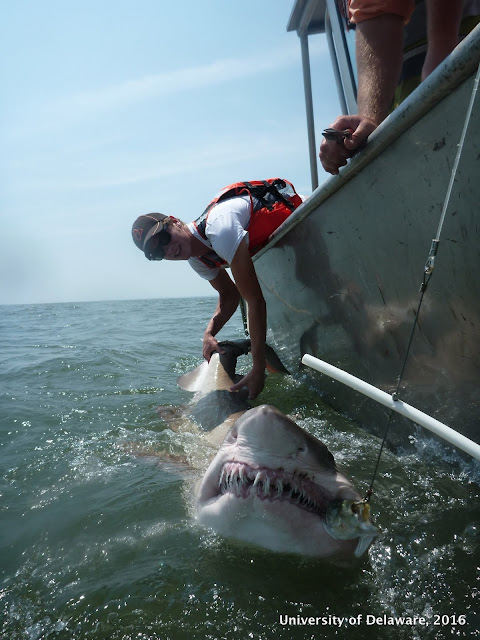 “Higher-order decision-making processes are often associated with mammals, or species that we think of as really smart – dolphins, elephants, or chimpanzees,” said Danielle Haulsee, a PhD candidate in oceanography at the University of Delaware in Lewes. “Our research shows that it is important for the scientific community to not rule out these types of behaviors in non-mammalian species, as behavior can often give us insight on how species interact with their ecosystems and how resources that humans depend on are distributed around the world.”

Sand Tiger sharks, top predators that live in coastal waters off the Eastern United States, have experienced drastic population declines over the past several decades. Sand tigers are important regulators of marine food webs but have been historically understudied, according to Haulsee.

In the summer, Sand Tigers congregate together in the shallow waters of the Delaware Bay, but little is known about their movements and how they interact with one another in the open ocean during the rest of the year, Haulsee said. Understanding how these sharks move and interact could help biologists better conserve this species and determine how vulnerable they are to human activities such as fishing and dredging.

Haulsee and her research team used acoustic tags to track the movements of over 300 individual Sand Tiger sharks and record shark-shark interactions over the course of a year. Previous studies have looked at shark interactions in laboratories or species contained in pens, but this the first study to record interactions for almost a year in free-swimming sharks, Haulsee said.

Initial data from two individual sharks show they encountered nearly 200 other sand tigers throughout the year, as well as several individuals from other shark species.

These sharks exhibit fission-fusion social behavior, meaning that the number of sharks in a group and the individuals that are part of the group change by location and time of year. Haulsee and her team found that groups of Sand Tigers stay together for certain times of the year and fall apart during other times. They also found that Sand Tigers re-encounter the same sharks throughout the year. 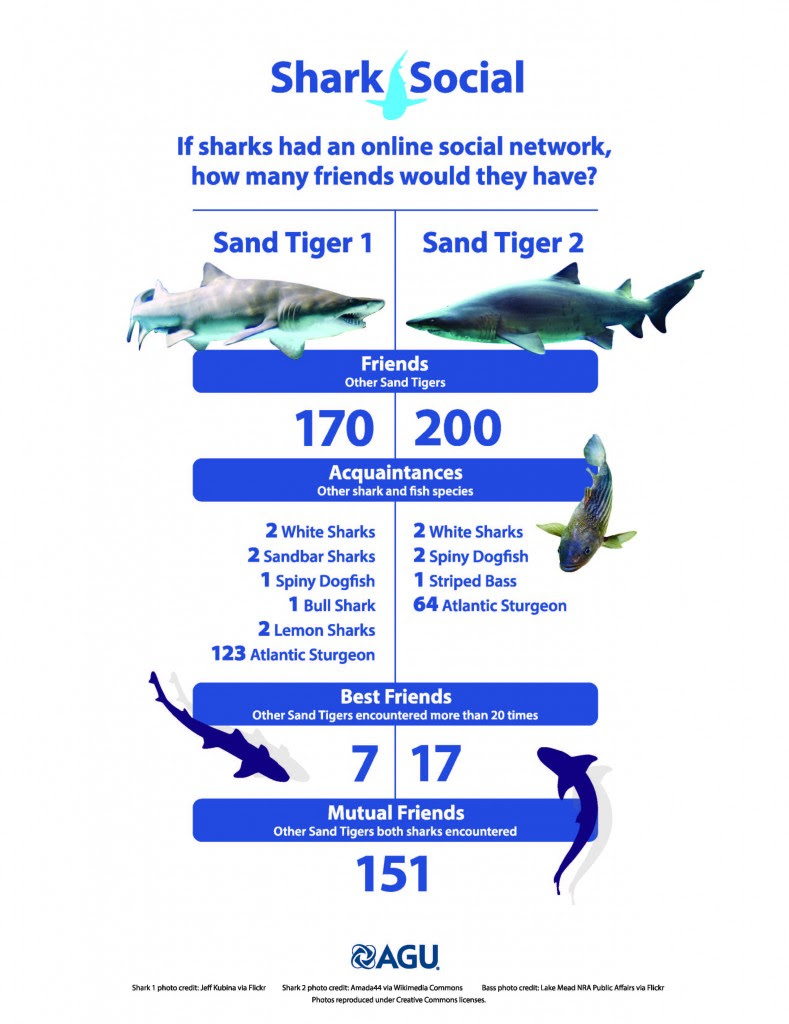 One surprise was a sudden lack of encounters with other Sand Tigers in the late winter and early spring, Haulsee said. Up until that point, both Sand Tigers were encountering other sharks regularly, but in the late winter, both seemed to enter a dispersal phase where they encountered very few other sharks. According to Haulsee, this could be related to other aspects of the sharks’ lives, such as mating and searching for food, which suggests that they could be performing a kind of social cost-benefit analysis.

Although this type of social behavior has been suggested in sharks before, the change in the group composition on an individual basis has not been documented in this way, according to Haulsee.

Danielle Haulsee, PhD candidate in oceanography at the University of Delaware in Lewes, and colleagues implant an acoustic receiver into a Sand Tiger shark resting in a sling. 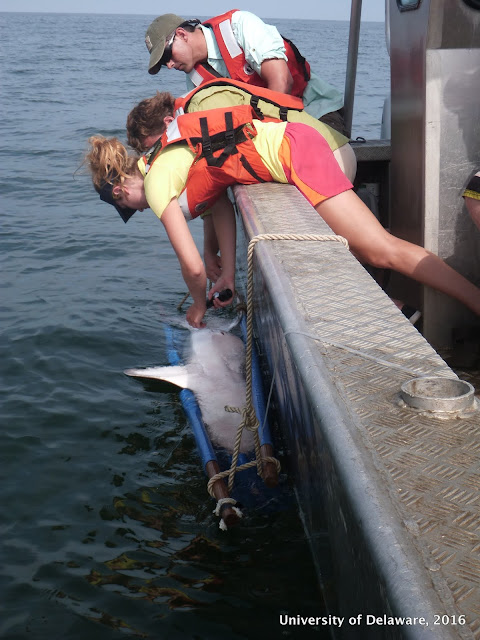 “If you’re living with a group, there could be some kind of protection or information sharing that comes with being in that group,” she said. “But if there’s a lot of competition for food resources or mating resources, then it’s not beneficial anymore to be in a group, and you might swim away from your group and go off on your own.”

Haulsee will be presenting initial data from the study today at the 2016 Ocean Sciences Meeting co-sponsored by the Association for the Sciences of Limnology and Oceanography, The Oceanography Society and the American Geophysical Union.

The researchers hope to use their results to answer questions about whether Sand Tigers form family groups or whether sharks of similar size and sex form distinct groupings. They also hope that defining critical locations where sharks congregate together will help build conservation plans to better protect this species.

“If we know where and when the population is grouped, we can focus on limiting human-induced disturbances in those times and places,” Haulsee said. “For example, if we know there are certain times and places where breeding females, or even more importantly the pregnant females, are aggregated together, we can devote resources into those areas to protect those sharks.”