Researchers Find Birds Can Theorize About the Minds of Others, Even Those They Cannot See

The question of what sets humans apart from other animals is one of the oldest philosophical puzzles. A popular answer is that only humans can understand that others also have minds like their own.

But new research suggests that ravens - birds singled out by many cultures as a symbol of intelligence and wisdom - share at least some of the human ability to think abstractly about other minds, adapting their behavior by attributing their own perceptions to others.

New research suggests that ravens share at least some of the human ability to think abstractly. 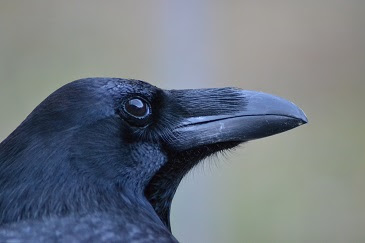 The study, "Ravens Attribute Visual Access to Unseen Competitors," was published Feb. 2 in Nature Communications. It found that ravens guarded caches of food against discovery in response to the sounds of other ravens if a nearby peephole was open, even if they did not see another bird. They did not show the same concern when the peephole was closed, despite the auditory cues. 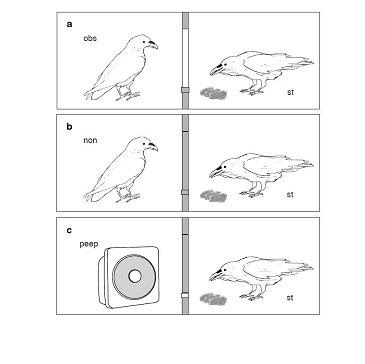 The findings shed new light on science's understanding of Theory of Mind, the ability to attribute mental states - including vision - to others, said Cameron Buckner, assistant professor of philosophy at the University of Houston. Buckner is an author of the paper, along with Thomas Bugnyar and Stephan A. Reber, cognitive biologists at the University of Vienna.

Most Theory of Mind research involving animals has been done with chimpanzees and other species closely tied to humans. But while those studies have suggested that animals are able to understand what others see - giving them an advantage in competing for food, for example - they rely on the test subjects' ability to see another's head or eyes, providing so-called "gaze cues." Skeptics argue that animals in these experiments might be responding only to these surface cues, without any real understanding of what others see.

"Thus," the authors write describing the previous state of the research, "it still remains an open question whether any nonhuman animal can attribute the concept 'seeing' without relying on behavioral cues."

Buckner, who focuses on animal cognition, said the researchers avoided that concern in this experiment by using only open peepholes and sounds to indicate the presence of a possible competitor, with the ravens never physically able to see another raven in the context of the experiment.

Ravens are a good subject for study, he said, because despite their obvious evolutionary divergence from humans, their social lives go through several distinct phases, similar to people. In particular, they often defend territories in stable breeding pairs as adults but live in more fluid situations as adolescents.

"There is a time when who is in the pack, who's a friend, who's an enemy can change very rapidly," he said. "There are not many other species that demonstrate as much social flexibility. Ravens cooperate well. They can compete well. They maintain long-term, monogamous relationships. This all makes them a good place to look for social cognition, because similar social pressures might have driven the evolution of similarly advanced cognitive capacities in very different species."

The ability to cache food is important to ravens, and previous research had shown they behave differently when they perceive a competitor watching. For example, when ravens are being watched, they hide food more quickly and are less likely to return to a previously made cache, both of which might reveal the location of a cache to a possible pilferer. If they do not think they are being watched, they spend more time on the task.

This study involved two rooms, connected both by windows, which could be opened or covered, and by peepholes, which could be open or closed. The ravens were trained to look through the peepholes to observe a human experimenter making caches in the adjacent room. During the final phase of the test, both windows were covered but a peephole was open. A hidden speaker played sounds of a raven competitor, but no other bird was present. The subjects still cached as though they were being watched.

"We show that ravens ... can generalize from their own experience using the peephole as a pilferer and predict that audible competitors could potentially see their caches (through the peephole)," the authors write. "Consequently, we argue that they represent 'seeing' in a way that cannot be reduced to the tracking of gaze cues."

It also offers new evidence about the capacities involved in Theory of Mind and abstract thinking, Buckner said. "It could change our perception of human uniqueness, that we share some of that ability not just with chimpanzees and closely related species but also with a very different species."

Buckner said the next step will be to see which other animals are capable of the kind of abstraction assessed in the peephole test, "especially humans, since we don't know when this ability emerges in childhood.

"Finding that Theory of Mind is present in birds would require us to give up a popular story as to what makes humans special," he said. "But completing this evolutionary and developmental picture will bring us much closer to figuring out what's really unique about the human mind."


Contacts and sources:
Jeannie Kever
University of Houston
on February 03, 2016