New Source of Intense Gamma-Radiation in the Sky

This is an artist's impression of the clash of powerful stellar winds. 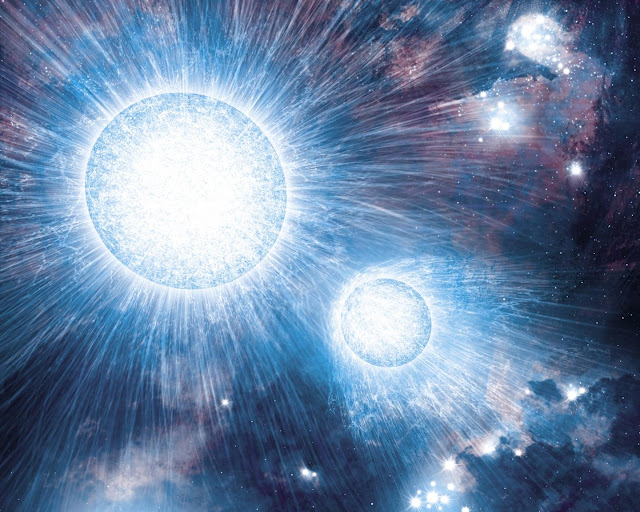 His article was published in the latest issue of 'Monthly Notices of the Royal Astronomical Society Letters':http://dx.doi.org/10.1093/mnrasl/slv205

Massive binary star systems with highly luminous and hot Wolf-Rayet stars and massive (tens solar masses) OB companion generate strong stellar winds. Its percussion may lead to producing a fierce photon flux with an energetic potential of more than a hundred mega electronvolt (MEV), when a distance separating stars is relatively short. That phenomenon was considered as a possible source of gamma-radiation for a long while.

Though such radiation was detected only once, with the famous Eta Carinae, which was observed for more than four centuries (particularly intensively - after 1834, when one of its stars underwebt an explosion and for some time was the most luminous star in the sky) ).

Eta Carinae is comparatively close to Earth - around 7,5 -- 8 thousand light years. The stars in this system weight 120 and (30-80) solar masses respectively, and shine brighter than millions of suns. If they were 10 parsec (30 light years) away from the Earth, they would be just as luminous as the Moon, while the Sun would be invisible on such distance. Naturally, Eta Carinae was the first candidate to consider and seven years ago high-energy radiation from this system was finally detected. 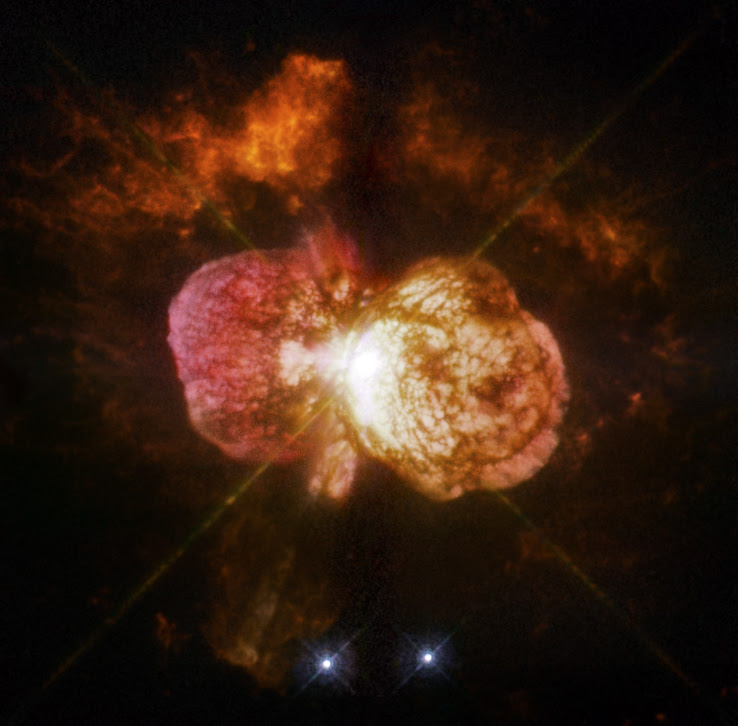 However, one example was not enough to confirm the model of binary stars emitting high-energy radiation, and the search for similar sources was continued, which turned out to be a tricky task.

"Recent calculations proved such star types as Eta Carinae to be incredibly rare - probably, one per a galaxy like we inhabit, or less,' said Maxim Pshirkov, my colleagues' research resulted in no certain findings. In 2013 an American-Austrian research team composed a list of seven stellar systems containing Wolf-Rayet stars, where a radiation could most probably appear. This research was based on two years of observations and lacked data, so it was only possible to set an upper limit on the HE radiation. I decided to utilize larger set of data seven years of Fermi-LAT observations. As the result - it was discovered that Gamma Velorum is the source of gamma-radiation at 6.σ. confidence level"

This system contains two stars with masses of 30 and 10 solar masses. Their orbital parameters are well-studied and they are separated by about the same distance as Earth and Sun. The luminosity of this binary system is about 200 thousand times higher than of the Sun and strong stellar winds have very high mass loss rate: hundred-thousandth and two ten-millionth of the solar mass every year.

Though these figures seem to be small, actually this amount is huge, particularly comparing to the solar wind which only amounts to 10-14 solar mass per annum As the stellar winds in the Gamma Velorum system collide on a speed exceeding 1000 kilometers per second, particles are accelerated in the shock. Though an exact mechanism of this acceleration is still unknown, it definitely leads to a high energy photon radiation that turned out to be detected by Fermi LAT.

An attentive reader who followed the process of searching for Higgs boson in the Large Hadron Collider has probably faced the standard deviation that Pshirkov mentions and remembered that in physics a hypothesis is proved on a statistical accuracy higher than 5σ. That means it is confirmed with a probability higher than 99,999%. In other words Pshirkov's discovery with its six standard deviations is definitely reliable, though it's still not far away from the threshold. According to the article, it was partly a pure luck that helped the researcher.

"Searching for similar sources in the very galactic plane is much more complicated, since it is a powerful gamma-ray source itself, and detecting small photon excess coming from colliding stellar winds becomes much more difficult with this background," says the scientist. "But the Gamma Velorum system lies above the plane surface and it is comparatively close to us. The discovery would not probably happen, if it was further away or closer to the plane."