Immediately after its 2008 launch, NASA's Interstellar Boundary Explorer, or IBEX, spotted a curiosity in a thin slice of space: More particles streamed in through a long, skinny swath in the sky than anywhere else. The origin of the so-called IBEX ribbon was unknown - but its very existence opened doors to observing what lies outside our solar system, the way drops of rain on a window tell you more about the weather outside.

Now, a new study uses IBEX data and simulations of the interstellar boundary - which lies at the very edge of the giant magnetic bubble surrounding our solar system called the heliosphere - to better describe space in our galactic neighborhood.

Artist concept: Far beyond the orbit of Neptune, the solar wind and the interstellar medium interact to create a region known as the inner heliosheath, bounded on the inside by the termination shock, and on the outside by the heliopause. 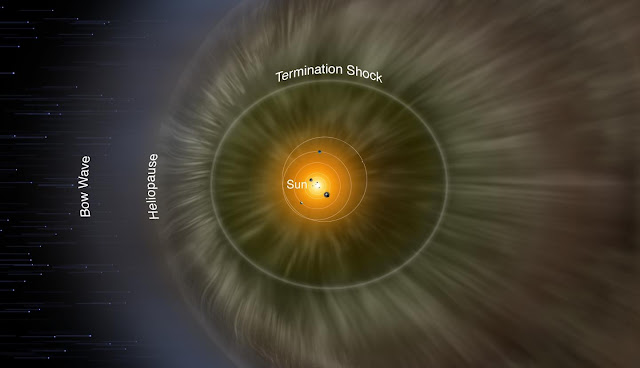 The paper, published Feb. 8, 2016, in Astrophysical Journal Letters, precisely determines the strength and direction of the magnetic field outside the heliosphere. Such information gives us a peek into the magnetic forces that dominate the galaxy beyond, teaching us more about our home in space.

The new paper is based on one particular theory of the origin of the IBEX ribbon, in which the particles streaming in from the ribbon are actually solar material reflected back at us after a long journey to the edges of the sun's magnetic boundaries. A giant bubble, known as the heliosphere, exists around the sun and is filled with what's called solar wind, the sun's constant outflow of ionized gas, known as plasma. When these particles reach the edges of the heliosphere, their motion becomes more complicated.

This simulation shows the origin of ribbon particles of different energies or speeds outside the heliopause (labeled HP). The IBEX ribbon particles interact with the interstellar magnetic field (labeled ISMF) and travel inwards toward Earth, collectively giving the impression of a ribbon spanning across the sky. 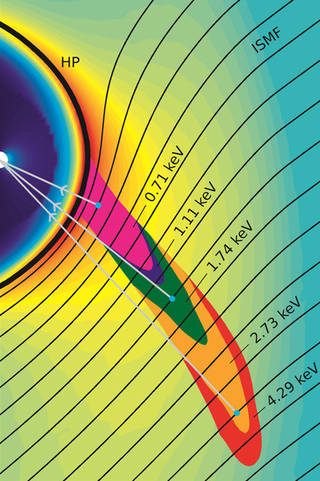 "The theory says that some solar wind protons are sent flying back towards the sun as neutral atoms after a complex series of charge exchanges, creating the IBEX ribbon," said Eric Zirnstein, a space scientist at the Southwest Research Institute in San Antonio, Texas, and lead author on the study. "Simulations and IBEX observations pinpoint this process - which takes anywhere from three to six years on average - as the most likely origin of the IBEX ribbon."

Outside the heliosphere lies the interstellar medium, with plasma that has different speed, density, and temperature than solar wind plasma, as well as neutral gases. These materials interact at the heliosphere's edge to create a region known as the inner heliosheath, bounded on the inside by the termination shock - which is more than twice as far from us as the orbit of Pluto - and on the outside by the heliopause, the boundary between the solar wind and the comparatively dense interstellar medium.

Some solar wind protons that flow out from the sun to this boundary region will gain an electron, making them neutral and allowing them to cross the heliopause. Once in the interstellar medium, they can lose that electron again, making them gyrate around the interstellar magnetic field. If those particles pick up another electron at the right place and time, they can be fired back into the heliosphere, travel all the way back toward Earth, and collide with IBEX's detector. The particles carry information about all that interaction with the interstellar magnetic field, and as they hit the detector they can give us unprecedented insight into the characteristics of that region of space.

"Only Voyager 1 has ever made direct observations of the interstellar magnetic field, and those are close to the heliopause, where it's distorted," said Zirnstein. "But this analysis provides a nice determination of its strength and direction farther out."

For the recent study, such observations were used to seed simulations of the ribbon's origin. Not only do these simulations correctly predict the locations of neutral ribbon particles at different energies, but the deduced interstellar magnetic field agrees with Voyager 1 measurements, the deflection of interstellar neutral gases, and observations of distant polarized starlight.

However, some early simulations of the interstellar magnetic field don't quite line up. Those pre-IBEX estimates were based largely on two data points - the distances at which Voyagers 1 and 2 crossed the termination shock.

"Voyager 1 crossed the termination shock at 94 astronomical units, or AU, from the sun, and Voyager 2 at 84 AU," said Zirnstein. One AU is equal to about 93 million miles, the average distance between Earth and the sun. "That difference of almost 930 million miles was mostly explained by a strong, very tilted interstellar magnetic field pushing on the heliosphere."

But that difference may be accounted for by considering a stronger influence from the solar cycle, which can lead to changes in the strength of the solar wind and thus change the distance to the termination shock in the directions of Voyager 1 and 2. The two Voyager spacecraft made their measurements almost three years apart, giving plenty of time for the variable solar wind to change the distance of the termination shock.

"Scientists in the field are developing more sophisticated models of the time-dependent solar wind," said Zirnstein.

The simulations generally jibe well with the Voyager data.

"The new findings can be used to better understand how our space environment interacts with the interstellar environment beyond the heliopause," said Eric Christian, IBEX program scientist at NASA's Goddard Space Flight Center in Greenbelt, Maryland, who was not involved in this study. "In turn, understanding that interaction could help explain the mystery of what causes the IBEX ribbon once and for all."

The Southwest Research Institute leads IBEX with teams of national and international partners. NASA Goddard manages the Explorers Program for the agency's Heliophysics Division within the Science Mission Directorate in Washington.