Seismologists studying a massive crack in the ground that appeared north of Menominee, Michigan in 2010 now think they know what the unusual feature might be. But as they explain in their study published this week in the journal Seismological Research Letters, there are still some mysteries to clear up about the strange geological occurrence in the rural Michigan woods.

A photo taken in 2010 of the Menominee Crack, a 'pop-up' geological feature. 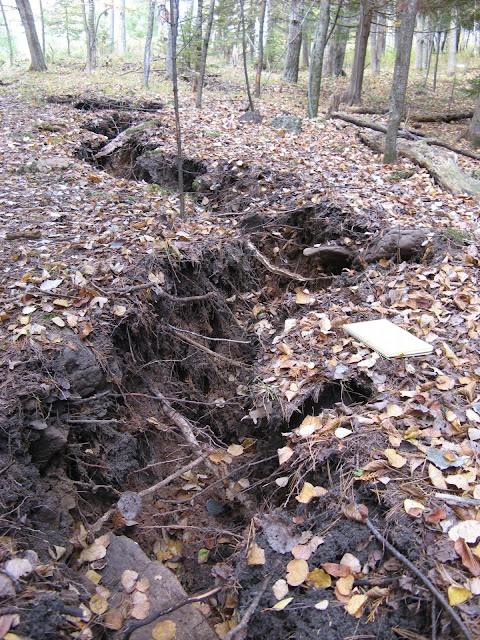 A team of scientists led by Wayne Pennington of Michigan Technological University says that the crack, which lies along the crest of a two-meter-high ridge that appeared at the same time, is probably a "pop-up" feature. Pop-ups occur in places where shallowly-buried rock layers spring upward after having been weighed down by rock or ice. Pop-ups--sometimes called "A-tents" for their shape--may develop in places where the earth rebounds upward after an overlying glacier shrinks away, or when rock overburden is removed in a quarry.

However, the last glaciers retreated from Menominee 11,000 years ago--and there isn't any quarrying in the area.

"One of our reasons for publishing this was that in our search of the literature we could find no other mention of modern pop-ups that didn't occur at something like the base of a quarry, where people had removed massive amounts of rock earlier," Pennington explained. "As far as we can tell, this is a one-of-a-kind event."

Residents near Menominee heard a loud noise and shaking in the early morning of October 4, 2010, and soon discovered the crack when they went into the nearby woods to clean up the debris left from removing a big double-trunked white pine tree a few days earlier. The crack split the ground for 110 meters, and was as deep as 1.7 meters in some places. Tree trunks tilted at precarious angles on either side of the fracture.

Pennington went to visit the site on his way back home from a scientific conference, he recalled. He paced off some measurements in his dress shoes and collected some GPS data with his phone. "I was completely blown away by it, because it wasn't what I was expecting when I saw it," he recalled. "It wasn't like anything I had seen before."

Although the crack was the most dramatic feature, Pennington was intrigued by the new ridge underneath it. "I kept trying to think of ways that there could have been an uplift from a thrusting earthquake or something, but anything like that requires such a huge amount of displacement in order to produce that amount of crustal shortening, that nothing made sense."

He shared the photos and data with his colleagues, until Stanford University geophysicist Norm Sleep pointed out that the feature formed from a shallow-buried layer of limestone, and looked like a pop-up. "This made perfect sense to us," Pennington said, "except for what caused it. And that then became the puzzle."

The researchers needed to get a better look at the rock underneath the ridge to confirm that it was a pop-up, so they turned to a technique called seismic refraction. The technique measures the speed of seismic waves as they travel within layers of the earth, as determined at different distances from the seismic source. In this case, the seismologists used a sledgehammer to strike a large metal ball lying on the ground, and captured the resulting seismic waves.

In broken rock, the waves travel faster as they move parallel to cracks in the rock, and slower when they move perpendicular to the cracks and have to travel across the fractures. The scientists found a pattern of refraction speeds that seemed to be consistent with the intense bending and then fracturing of the brittle limestone of a pop-up feature.

But what caused the pop-up to...pop-up? Without the usual suspects in play, Pennington and his colleagues had to do a little detective work. The limestone in the area may have been stressed almost to the point of cracking when the last glaciers retreated, they say. The recent removal of the double-trunked pine, which may have weighed as much as 2000 kilograms--over two tons--could have been the final straw, allowing the rock to bend upward when that weight was removed.

"There's a 60% chance that this explanation we provide is the right one," Pennington noted. "But since we haven't seen this kind of thing elsewhere, and the tree is such a small effect, we wonder if there might be something else."

The seismologists studied aerial photos of the region to see how soil has been removed in the past 50 years from road work and a re-design of the area's drainage system. These changes might have channeled more rainwater below the surface, potentially weakening the rock as it froze and thawed, the scientists suggest.

Pennington said "no one should be losing sleep" over the strange feature, which technically counted as the first natural earthquake in Michigan's Upper Peninsula--measuring less than magnitude 1.

"It may be a one-of-a kind phenomenon," he said. "But if it happens again, we'll be all over it, trying to figure it out."