For years, scientists have been pursuing ways to imitate a leaf's photosynthetic power to make hydrogen fuel from water and sunlight. In a new twist, a team has come up with another kind of device that mimics two of a leaf's processes — photosynthesis and transpiration — to harness solar energy to purify water. Their development, reported in the journal ACS Applied Materials & Interfaces, could help address issues of water scarcity.

Contaminated water can be cleaned up to varying levels of purity with a new artificial leaf. 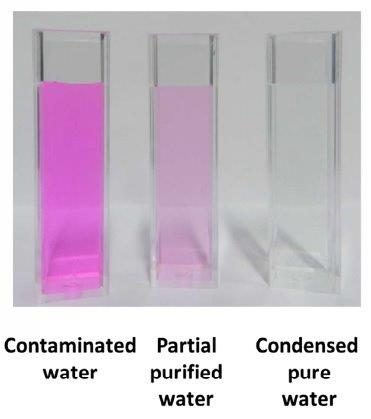 More than 1 billion people around the world live in areas where clean water is hard to come by, and that number will likely rise as the population grows. One possible solution to the shortage is to clean up wastewater or other water sources that would otherwise not be drinkable or usable for agriculture. But methods to scrub contaminants from water mostly rely on conventional energy sources. To address the water problem without adding to the dependence on fossil fuels, Peng Tao, Wen Shang and colleagues developed a way to purify water by copying the way green leaves work.

The researchers built a tri-layer membrane out of titanium dioxide (TiO2) nanoparticles, gold nanoparticles and a supporting layer of anodized aluminum oxide. The membrane cleans water in two ways. In a photosynthesis-like process, the TiO2 layer captures light, and that energy spurs the breakdown of toxic pollutants in a water sample.

Testing showed it degraded about 60 percent of a model pollutant after two hours in simulated sunlight. The gold layer performs the transpiration role of a leaf — it harnesses solar energy and drives water at the sample surface to evaporate. The resulting vapor rises, leaving contaminants behind. The scientists then condensed the vapor to make purified water.