The 2010 Deepwater Horizon oil spill significantly altered microbial communities thriving near shipwrecks in the Gulf of Mexico, potentially changing these diverse ecosystems and degrading the historically and culturally significant ships they live on, according to new research being presented here.

The findings are also revealing how decades-old, or even centuries-old, shipwrecks could be used to monitor the health of deep-ocean ecosystems, and the effects of oil and gas activity in the Gulf, according to the researchers.

There are more than 2,000 known historic shipwrecks sitting on the ocean floor in the Gulf of Mexico, spanning some 500 years of maritime history: from the time of the 16th century Spanish explorers to the American Civil War and through the World War II era. In addition to their historical and cultural significance, historic shipwrecks also serve as artificial reefs, supporting a rich deep-sea ecosystem.

There are more than 2,000 known historic shipwrecks sitting on the ocean floor in the Gulf of Mexico, spanning some 500 years of maritime history: from the time of the 16th century Spanish explorers to the American Civil War and through the World War II era. In addition to their historical and cultural significance, historic shipwrecks also serve as artificial reefs, supporting a rich deep-sea ecosystem.

A 3D laser scan of the stern section of the German U-boat,U-166, that sunk in the Gulf of Mexico during World War II. The scan shows the U-boat’s conning tower and the build-up of sediments around the hull. Scientists will use this data to document changes at the shipwreck sites, including areas of hull collapse or weakening, and other site-formation processes.

In 2014, a multidisciplinary team of scientists launched a project investigating the effects of the Deepwater Horizon oil spill on shipwrecks that lie hundreds to thousands of feet underwater and the microbial communities forming the base of these ecosystems. The project is the first of its kind to study deep-sea shipwreck microbiomes, and the long-term impacts of an oil spill on shipwrecks and their microbial inhabitants, according to the researchers. (See a video of the research here)

“We are filling a huge void in our scientific understanding of the impacts of the spill,” said Melanie Damour, a marine archaeologist at the Bureau of Ocean Energy Management in New Orleans, Louisiana, and a co-leader of the project.

Scientists found that the presence of a shipwreck influences which microbes are present on the seafloor, and the release of 4 million barrels of oil from the Macondo well for 87 days significantly altered nearby shipwreck microbial communities. Even four years after the event, the oil was still affecting the community structure and function of these microbes, potentially impacting other parts of the ecosystem. Laboratory studies found that the dispersant used to clean up the oil spill significantly alters the shipwreck microbial community that forms the foundation for other life, like coral, crabs and fish, which thrive there.

Bow of the Ewing Bank Wreck, a 19th century wooden-hulled sailing ship that lies in more than 600 meters (2,000 feet) of water. The image shows a close-up view of the copper sheathing attached to the outside of the wooden hull. After the vessel sank, it became a vibrant artificial reef now colonized by Lophelia pertusa coral (white), Venus flytrap anemones, and many other species of macrofauna. 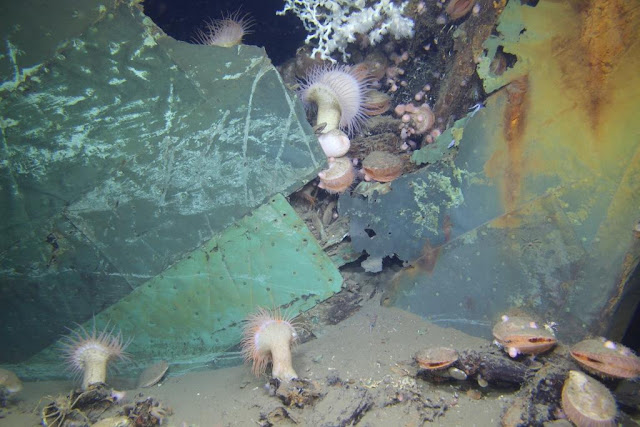 Not only did these studies show that the spill affected these ecosystems, but they also provide a new way to monitor the spill’s effects, said Leila Hamdan, a microbial ecologist at George Mason University in Manassas, Virginia and co-leader of the project.

“The microorganisms in these deep-water habitats, where these artificial reefs are present, they make life habitable, make it luxurious, in a place that is cold and dark and permanently separated from light,” she said. “If we are performing activities in the ocean that potentially change these extremely important communities, we should know about that.”

The laboratory studies also found that oil exposure increases metal corrosion caused by microbes, showing that the oil spill could potentially speed up degradation of the steel-hulled shipwrecks, according to Jennifer Salerno, a microbial ecologist at George Mason University.

Wood sample collected from the Mardi Gras shipwreck site, which sank some 200 years ago about 56 kilometers (35 miles) off the coast of Louisiana in 1,220 meters (4,000 feet) of water. A wood sample yields important clues about wood species, degradation in the local environment, and potential exposure to hydrocarbons or other contaminants. 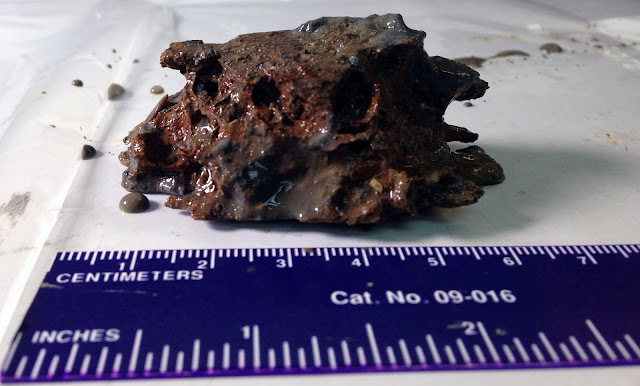 The team also used innovative 3-D laser and sonar technology to obtain high-resolution images of the vessels to document their current state of preservation. In one case, a World War II German U-boat that has been previously examined several times since its discovery in 2001 was found to be buried by more sediment than was observed prior to the spill, although the researchers are working to determine if it was a natural process or related to the oil spill. The team plans to repeatedly scan the shipwrecks to document how they change over time.

“These are pieces of our collective human history down there and they are worth protecting,” said Damour, adding that in some cases these ships may still contain human remains. “We are concerned that the degradation of these sites a lot faster than normal will cause the permanent loss of information that we can never get back.”

Members of the project team will be presenting their new research today at the 2016 Ocean Sciences Meeting co-sponsored by the Association for the Sciences of Limnology and Oceanography, The Oceanography Society and the American Geophysical Union.

The new findings show that deep-sea shipwrecks could be used for long-term monitoring of deep-sea ecosystems, according to the researchers. Understanding this unique ecosystem could aid in protecting and conserving it – both the animals that live on the shipwrecks, and the ships themselves, they said. Information about these shipwrecks could also aid scientists who research the deep sea, and companies performing activities there, the researchers said.

For Hamdan, the experience of working on the shipwreck project has been transformative. “I will never forget the sensation I had when the ROV flew across the dark seafloor, an already beautifully muddy landscape, and suddenly there was a shipwreck, with all of its history and ecology before my eyes,” she said recalling the project’s first expedition in 2014. “It really changed me as a scientist … In a single instant I knew that there was more to the seafloor than I ever really considered.”