Not only is Greenland's melting ice sheet adding huge amounts of water to the oceans, it could also be unleashing 400,000 metric tons of phosphorus every year - as much as the mighty Mississippi River releases into the Gulf of Mexico, according to a new study. Phosphorus is a key nutrient that could, if it reaches the open ocean, enrich waters of the Arctic Ocean, potentially stimulating growth of the marine food chain, the study's authors said.

Phosphorus is an essential nutrient that feeds plankton at the base of the ocean food web. Glacial meltwater has long been known to contain phosphorus, but now new research shows that as the Greenland ice sheet melts it could be releasing far more of the nutrient than previously thought, reports Jon Hawkings, a Cabot Institute researcher at the Bristol Glaciology Centre at the University of Bristol in the United Kingdom.

This is the sediment-rich meltwater river originating from Leverett Glacier in southwest Greenland, pictured in June 2012. 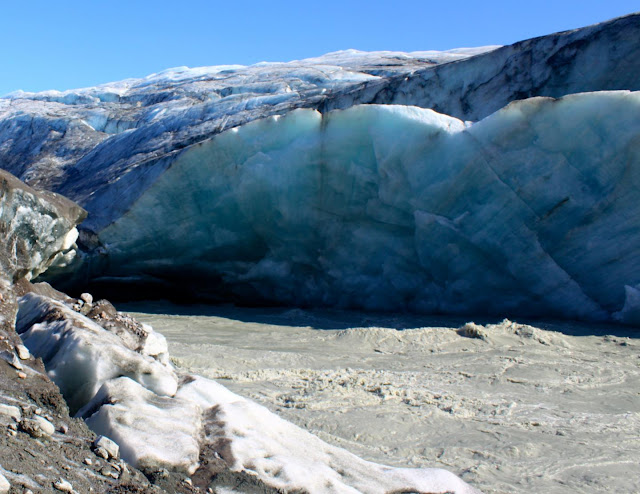 Hawkings and his collaborators spent three months in 2012 and 2013 gathering water samples and measuring the flow of water from the 600-square-kilometer (230-square-mile) Leverett Glacier and the smaller, 36-square-kilometer (14-square-mile) Kiattuut Sermiat Glacier in Greenland as part of a Natural Environment Research Council-funded project to understand how much phosphorus, in various forms, was escaping from the ice sheet over time and draining into the sea. They then used that data to extrapolate how much phosphorus was likely being released from the entire Greenland ice sheet.

They found greater amounts of phosphorus in the waters of the Leverett Glacier than had been detected at previous study sites, which have looked mostly at smaller glaciers. The large Leverett Glacier, however, is more representative of the glaciers that contribute the bulk of meltwater coming from the Greenland ice sheet, said Hawkings.

"We find annual phosphorus input (for all of Greenland's outlet glaciers) are at least equal to some of the world's largest rivers, such as the Mississippi and the Amazon," Hawkings and his colleagues report in a new study accepted for publication in Global Biogeochemical Cycles, a journal of the American Geophysical Union. That amount could increase as the climate warms and more ice melts, according to the study's authors.

The sediment-rich meltwater river originating from Leverett Glacier in southwest Greenland, pictured in June 2012. Not only is Greenland's melting ice sheet adding huge amounts of water to the oceans, it could also be unleashing 400,000 metric tons of phosphorus every year, according to a new study. 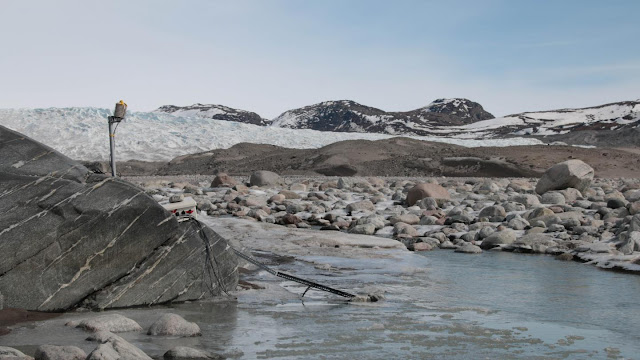 It is not clear yet how much of the phosphorus being released from the ice sheet is reaching the open ocean, but if a large amount of phosphorus coming off the glacier makes it to the sea, the nutrient could rev up biological activity of Arctic waters, according to the study's authors. The nutrient could stimulate growth of plankton at the base of the ocean food web that could impact birds, fish and marine mammals higher up the food chain. The research also suggests ice sheet-derived phosphorus could eventually reach the northern Pacific and Atlantic oceans, which are connected to the Arctic Ocean.

Oceanographers have historically thought of glaciers and ice sheets as frozen systems that don't add nutrients or water to the oceans, Hawkings explained. Research over the past couple of decades has shown there is flowing water at the base of glaciers. As climate change warms Greenland and more ice melts and makes its way into the sea, the ice sheet is potentially becoming a more important source of nutrients, he said.

Glacial meltwater gains phosphorus when it travels in moulins, or "pipes" through the ice - through the guts of the glacier and down to the where the ice meets the bedrock. Where the ice meets the bedrock at the very bottom of the glacier, the meltwater is exposed to phosphorus-rich rocks that are pulverized by the moving glacier.

If the majority of the phosphorus found in meltwater from all of Greenland's glaciers reaches the sea, it would be equal to about 400,000 metric tons (440,000 U.S. tons) per year of phosphorus, more than Arctic rivers are estimated to contribute to the Arctic Ocean, according to the new study. However, how much phosphorus makes it from the meltwater into the open oceans is not yet known. The largest portion of phosphorus, which is in the form of powdered rock minerals, could be settling out of the meltwater and end up buried in Greenland's fjords before it has time to dissolve, Hawkings said.

This is the sediment-rich meltwater river originating from Leverett Glacier in southwest Greenland, pictured in June 2012. 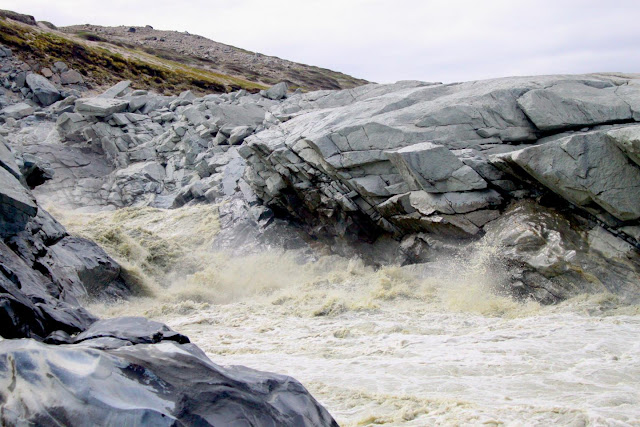 "This is an important finding because it highlights the role that the rapidly changing Greenland ice sheet plays in supplying nutrients to the Arctic Ocean," observed Eran Hood of the University of Alaska Southeast in Juneau, who studies the meltwater from coastal glaciers in Alaska, and was not involved in the new study.

"Now we need to understand how much of this phosphorus, especially in the particulate, ends up being utilized in high-latitude marine ecosystems form," said Hood. "I think that's an important open question."