Galaxy Trailed By Stunning Plume Of Gas I

Astronomers have discovered a spectacular tail of gas more than 300,000 light years across coming from a nearby galaxy.

The plume is made up of hydrogen gas--the material new stars are made of--and is five times longer than the galaxy itself.

The foreground galaxy is NGC 4569 of the Virgo cluster. The red filaments to the right of the galaxy show the hydrogen gas that has been removed. The tail represents about 95 per cent of the gas reservoir the galaxy needs to feed the formation of new stars. 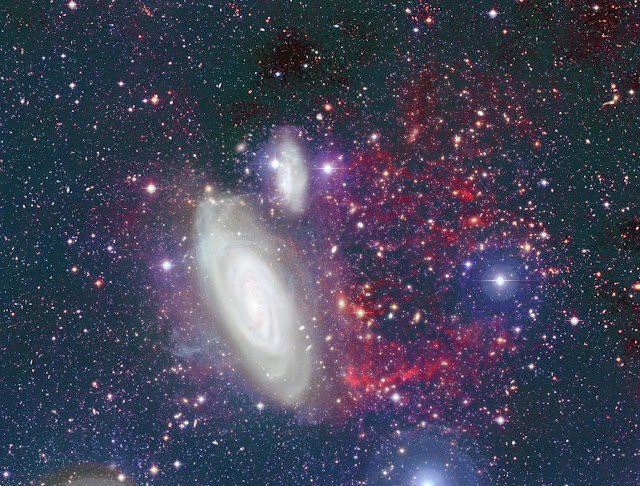 The discovery was made by an international team of scientists led by Dr Alessandro Boselli at the Laboratoire d'Astrophysique de Marseille in France, and published in the journal Astronomy & Astrophysics.

International Centre for Radio Astronomy Research astrophysicist Luca Cortese, who is part of the research team, said scientists noticed long ago that the galaxy NGC 4569 contained less gas than expected but they could not see where it had gone.

"We didn't have the smoking gun, the clear evidence of direct removal of gas from the galaxy," he said.

"Now, with these observations, we've seen a huge amount of gas that creates a stream trailing behind the galaxy for the first time.

"What's very nice is that if you measure the mass of the stream, it's the same amount of gas that is missing from the galaxy's disc."

NGC 4569 sits in the Virgo cluster, a group of galaxies 55 million light years from our own Milky Way.

It is travelling through the cluster at about 1200 kilometres a second, and Dr Cortese said it is this movement that is causing the gas to be stripped from the galaxy.

"We know that big clusters of galaxies trap a lot of hot gas," he said.

"So when a galaxy enters the cluster it feels the pressure of all the gas, like when you feel the wind on your face, and that pressure is able to strip matter away from the galaxy."

The discovery was made when the research team used a super-sensitive camera on the Canada France Hawaii Telescope to observe NGC 4569 for longer than ever before.

Dr Cortese said it could be the first of many galaxies found to have long tails of gas extending from them.

"It's pretty exciting because this was just a pilot and we only targeted the brightest spiral galaxy in the Virgo cluster," he said.

"We were amazed by what we got... this is really promising because it means it's very likely we'll find similar features in many other galaxy clusters."