This ethereal scene captured by NASA’s New Horizons spacecraft tells yet another story of Pluto’s diversity of geological and compositional features—this time in an enhanced color image of the north polar area. 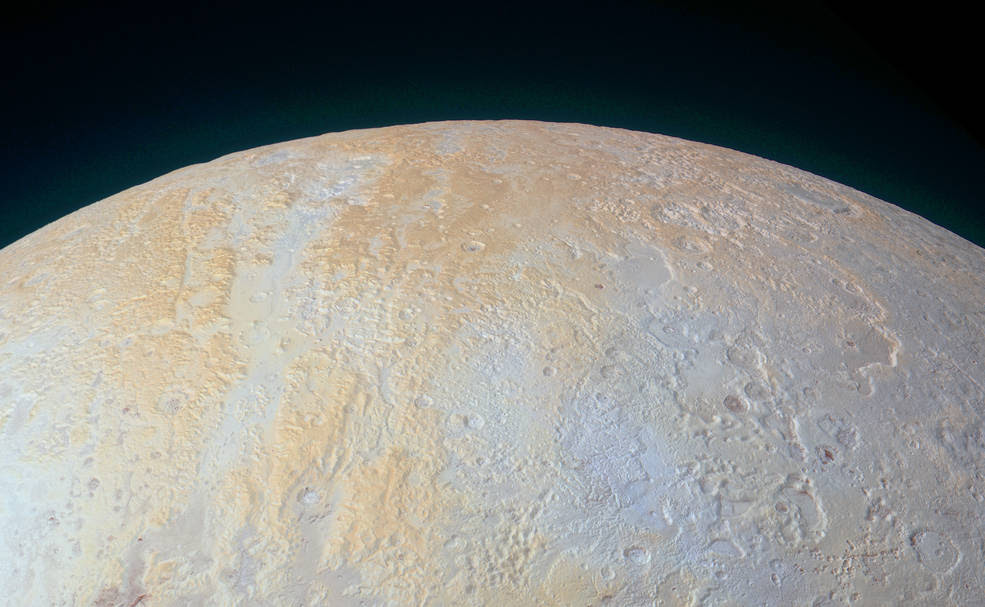 Long canyons run vertically across the polar area—part of the informally named Lowell Regio, named for Percival Lowell, who founded Lowell Observatory and initiated the search that led to Pluto’s discovery. The widest of the canyons (yellow in the image below) – is about 45 miles (75 kilometers) wide and runs close to the north pole. Roughly parallel subsidiary canyons to the east and west (in green) are approximately 6 miles (10 kilometers) wide. The degraded walls of these canyons appear to be much older than the more sharply defined canyon systems elsewhere on Pluto, perhaps because the polar canyons are older and made of weaker material. These canyons also appear to represent evidence for an ancient period of tectonics.

A shallow, winding valley (in blue) runs the entire length of the canyon floor. To the east of these canyons, another valley (pink) winds toward the bottom-right corner of the image. The nearby terrain, at bottom right, appears to have been blanketed by material that obscures small-scale topographic features, creating a ‘softened’ appearance for the landscape.

This image was obtained by New Horizons’ Ralph/Multispectral Visible Imaging Camera (MVIC). The image resolution is approximately 2,230 feet (680 meters) per pixel. The lower edge of the image measures about 750 miles (1,200 kilometers) long. It was obtained at a range of approximately 21,100 miles (33,900 kilometers) from Pluto, about 45 minutes before New Horizons’ closest approach on July 14, 2015. 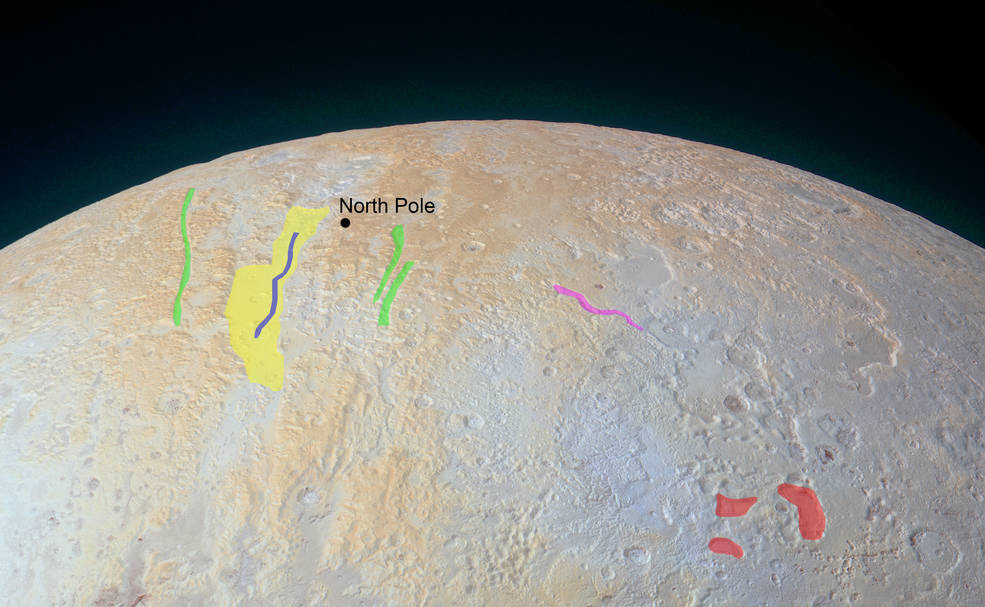 Large, irregularly-shaped pits (in red), reach 45 miles (70 kilometers) across and 2.5 miles (4 kilometers) deep, scarring the region. These pits may indicate locations where subsurface ice has melted or sublimated from below, causing the ground to collapse.

The color and composition of this region – shown in enhanced color – also are unusual. High elevations show up in a distinctive yellow, not seen elsewhere on Pluto. The yellowish terrain fades to a uniform bluish gray at lower elevations and latitudes. New Horizons' infrared measurements show methane ice is abundant across Lowell Regio, and there is relatively little nitrogen ice. “One possibility is that the yellow terrains may correspond to older methane deposits that have been more processed by solar radiation than the bluer terrain,” said Will Grundy, New Horizons composition team lead from Lowell Observatory, Flagstaff, Arizona.