First Detection of a Super-Earth's Atmosphere

For the first time astronomers were able to analyse the atmosphere of an exoplanet in the class known as super-Earths. Using data gathered with the NASA/ESA Hubble Space Telescope and new analysis techniques, the exoplanet 55 Cancri e is revealed to have a dry atmosphere without any indications of water vapour. The results, to be published in the Astrophysical Journal, indicate that the atmosphere consists mainly of hydrogen and helium.

This video shows an artist's impression of the super-Earth 55 Cancri and moving in front of its parent star. During transits These astronomers were incendio gather information about the atmosphere of the exoplanet. The Scientists were incendio retrieve the spectrum of 55 Cancri e embedded in the light of its parent star. The analysis Showed That the atmosphere of 55 Cancri and Mainly Consists of helium and hydrogen with hints of hydrogen cyanide.

The international team, led by scientists from University College London (UCL) in the UK, took observations of the nearby exoplanet 55 Cancri e, a super-Earth with a mass of eight Earth-masses. Cancri e has previously been dubbed the “diamond planet” because models based on its mass and radius have led to the idea that its interior is carbon-rich. It is located in the planetary system of 55 Cancri, a star about 40 light-years from Earth.

Using observations made with the Wide Field Camera 3 (WFC3) on board the NASA/ESA Hubble Space Telescope, the scientists were able to analyse the atmosphere of this exoplanet. This makes it the first detection of gases in the atmosphere of a super-Earth. The results allowed the team to examine the atmosphere of 55 Cancri e in detail and revealed the presence of hydrogen and helium, but no water vapour. These results were only made possible by exploiting a newly-developed processing technique.

This artist’s impression shows the exoplanet 55 Cancri e as close-up. Due to its proximity to its parent star, the temperatures on the surface of the planet are thought to reach about 2000 degrees Celsius.  Scientists were able to analyze the atmosphere of 55 Cancri e. It was the first time this was possible for a super-Earth exoplanet. 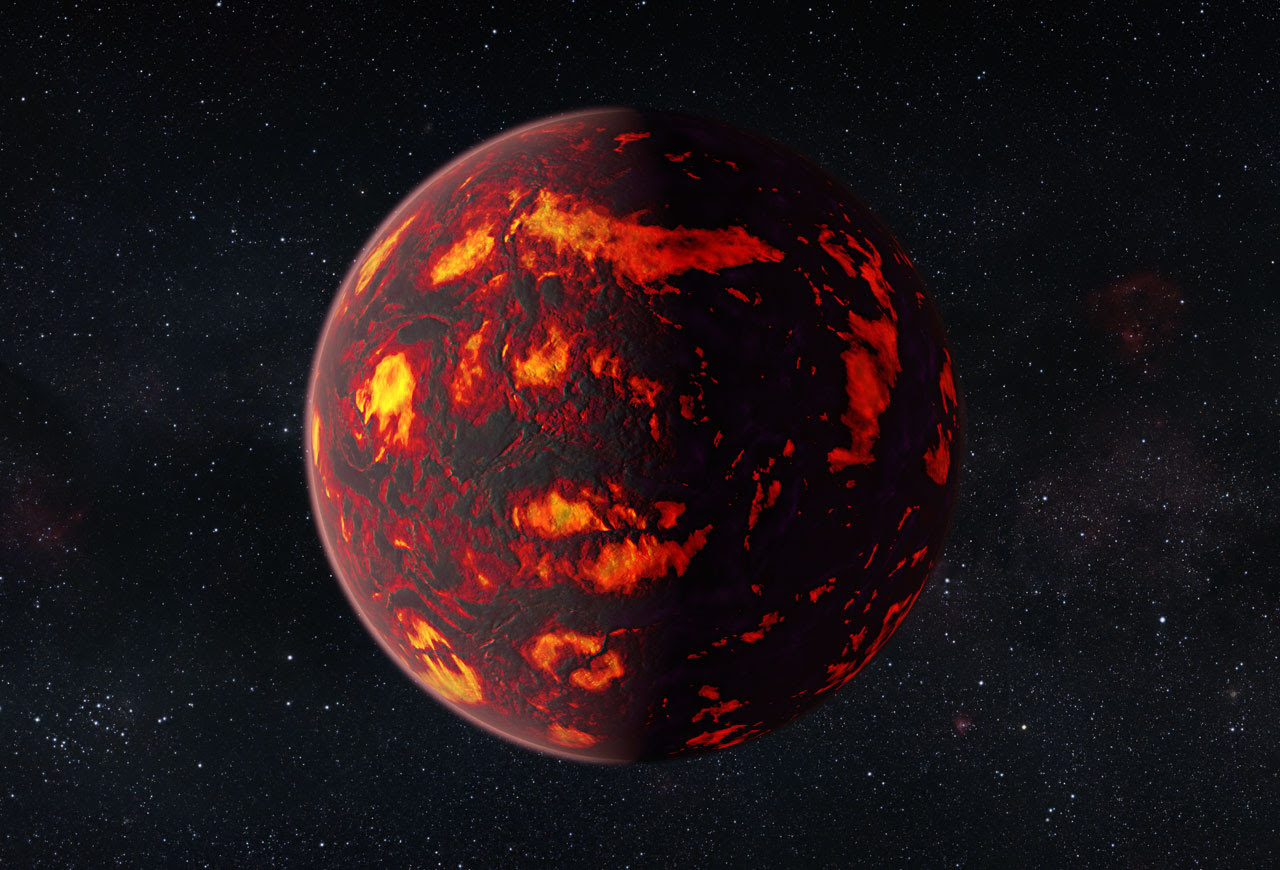 “This is a very exciting result because it’s the first time that we have been able to find the spectral fingerprints that show the gases present in the atmosphere of a super-Earth,” explains Angelos Tsiaras, a PhD student at UCL, who developed the analysis technique along with his colleagues Ingo Waldmann and Marco Rocchetto. “The observations of 55 Cancri e’s atmosphere suggest that the planet has managed to cling on to a significant amount of hydrogen and helium from the nebula from which it originally formed.”

Super-Earths like 55 Cancri e are thought to be the most common type of planet in our galaxy. They acquired the name ‘super-Earth’ because they have a mass larger than that of the Earth but are still much smaller than the gas giants in the Solar System. The WFC3 instrument on Hubble has already been used to probe the atmospheres of two other super-Earths, but no spectral features were found in those previous studies.

Hubble observed the super-Earths GJ1214b and HD97658b in 2014, using the transit method. The observations did not show any spectral features, indicating an atmosphere covered by thick clouds made of molecular species much heavier than hydrogen.

55 Cancri e, however, is an unusual super-Earth as it orbits very close to its parent star. A year on the exoplanet lasts for only 18 hours and temperatures on the surface are thought to reach around 2000 degrees Celsius. Because the exoplanet is orbiting its bright parent star at such a small distance, the team was able to use new analysis techniques to extract information about the planet, during its transits in front of the host star.

Observations were made by scanning the WFC3 very quickly across the star to create a number of spectra. By combining these observations and processing them through analytic software, the researchers were able to retrieve the spectrum of 55 Cancri e embedded in the light of its parent star.

“This result gives a first insight into the atmosphere of a super-Earth. We now have clues as to what the planet is currently like and how it might have formed and evolved, and this has important implications for 55 Cancri e and other super-Earths,” said Giovanna Tinetti, also from UCL, UK.

This artist’s impression shows the super-Earth 55 Cancri e in front of its parent star. Using observations made with the NASA/ESA Hubble Space Telescope and new analytic software scientists were able to analyse the composition of its atmosphere. It was the first time this was possible for a super-Earth.

55 Cancri e is about 40 light-years away and orbits a star slightly smaller, cooler and less bright than our Sun. As the planet is so close to its parent star, one year lasts only 18 hours and temperatures on the surface are thought to reach around 2000 degrees Celsius. 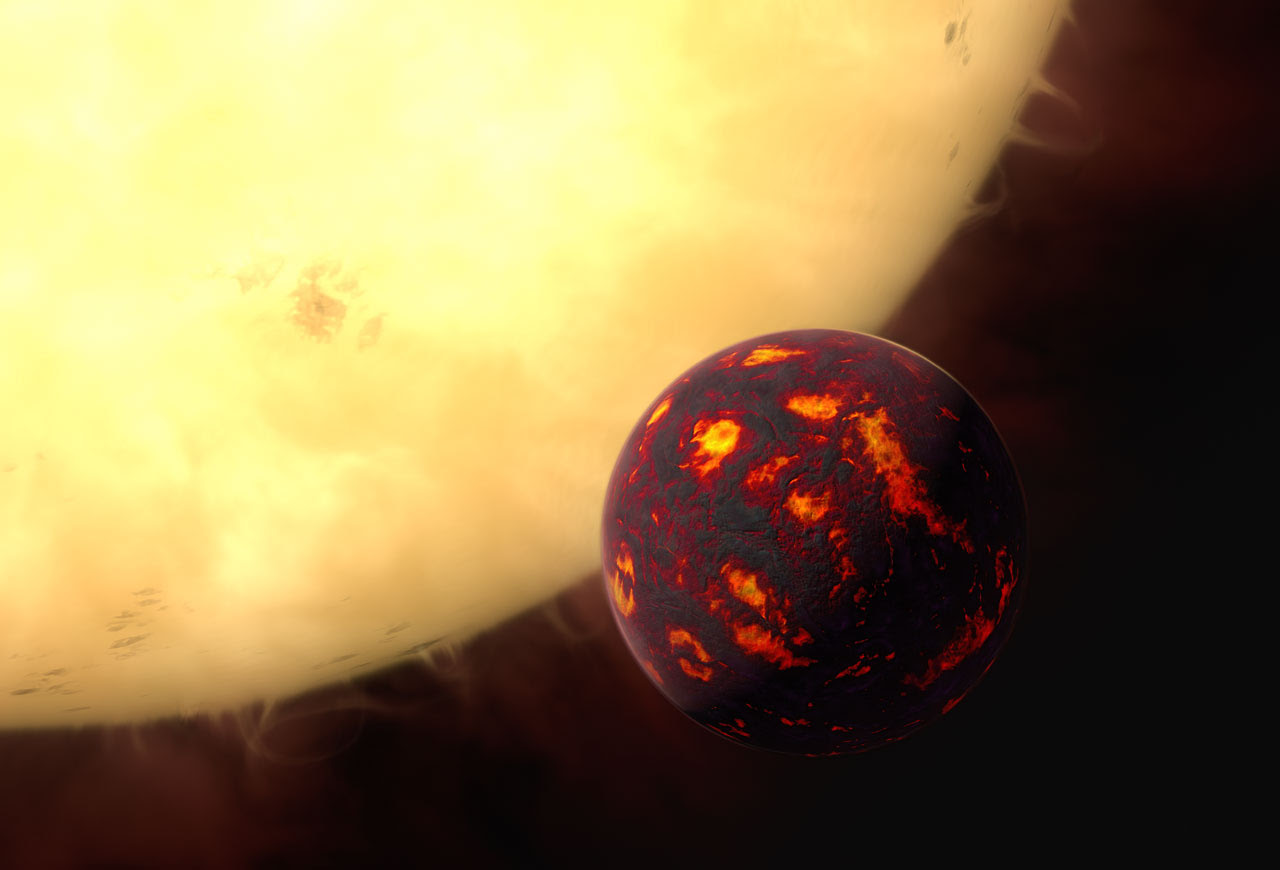 Intriguingly, the data also contain hints of the presence of hydrogen cyanide, a marker for carbon-rich atmospheres.

“Such an amount of hydrogen cyanide would indicate an atmosphere with a very high ratio of carbon to oxygen,” said Olivia Venot, KU Leuven, who developed an atmospheric chemical model of 55 Cancri e that supported the analysis of the observations.

“If the presence of hydrogen cyanide and other molecules is confirmed in a few years time by the next generation of infrared telescopes, it would support the theory that this planet is indeed carbon rich and a very exotic place,” concludes Jonathan Tennyson, UCL. “Although hydrogen cyanide, or prussic acid, is highly poisonous, so it is perhaps not a planet I would like to live on!”