'Cannibalism' Between Stars: New Research Shows the Turbulent Past of Our Sun

Stars are born inside a rotating cloud of interstellar gas and dust, which contracts to stellar densities thanks to its own gravity. Before finding itself on the star, however, most of the cloud lands onto a circumstellar disk forming around the star owing to conservation of angular momentum. The manner in which the material is transported through the disk onto the star, causing the star to grow in mass, has recently become a major research topic in astrophysics.

This is a Simulation of a gravitationally unstable circumstellar disk by means of hydrodynamic calculations. Protoplanetary 'embryo' form in the disc thanks to gravitational fragmentation. The three small pictures show the successive 'disappearance' of the lump by the star. 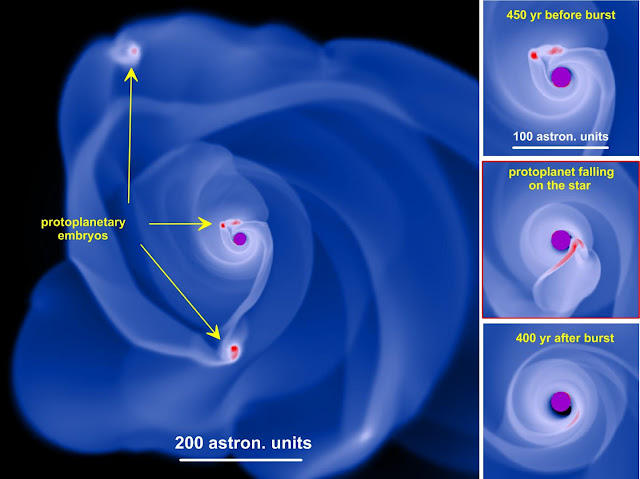 It turned out that stars may not accumulate their final mass steadily, as was previously thought, but in a series of violent events manifesting themselves as sharp stellar brightening. The young FU Orionis star in the constellation of Orion is the prototype example, which showed an increase in brightness by a factor of 250 over a time period of just one year, staying in this high-luminosity state now for almost a century.

One possible mechanism that can explain these brightening events was put forward 10 years ago by Eduard Vorobyov, now working at the Astrophysical Department of the Vienna University, in collaboration with Shantanu Basu from the University of Western Ontario, Canada.

According to their theory, stellar brightening can be caused by fragmentation due to gravitational instabilities in massive gaseous disks surrounding young stars, followed by migration of dense gaseous clumps onto the star. Like the process of throwing logs into a fireplace, these episodes of clump consumption release excess energy which causes the young star to brighten by a factor of hundreds to thousands. During each episode, the star is consuming the equivalent of one Earth mass every ten days. After this, it may take another several thousand years before another event occurs.

Eduard Vorobyov describes the process of clump formation in circumstellar disks followed by their migration onto the star as "cannibalism on astronomical scales". These clumps could have matured into giant planets such as Jupiter, but instead they were swallowed by the parental star. This invokes an interesting analogy with the Greek mythology, wherein Cronus, the leader of the first generation of Titans, ate up his newborn children (though failing to gobble up Zeus, who finally brought death upon his father).

These are the polarized intensities of four selected FU Orionis objects observed with the 8.2-meter Subaru Telescope. Significant asymmetries, such as elbows, arms and broad trends -- typical of gravitationally unstable disks -- are indicated by arrows. 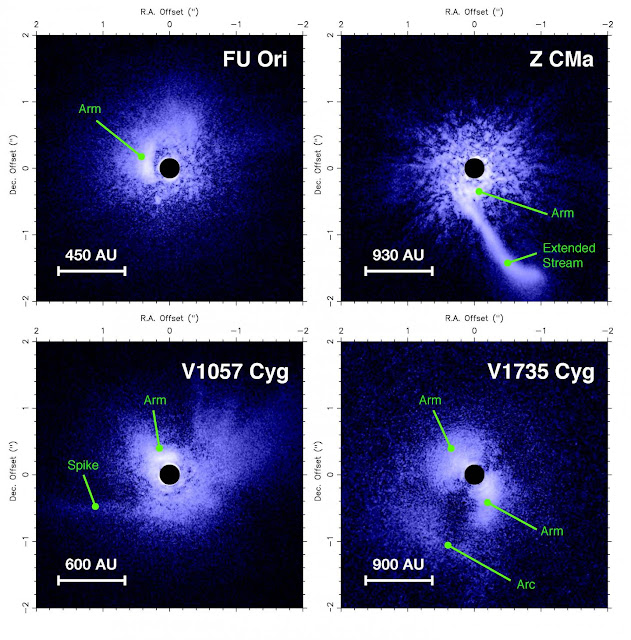 With the advent of advanced observational instruments, such as SUBARU 8.2 meter optical-infrared telescope installed in Mauna Kea (Hawaii), it has become possible for the first time to test the model predictions. Using high-resolution, adaptive optics observations in the polarized light, an international group of astronomers led by Hauyu Liu from European Space Observatory (Garching, Germany) has verified the presence of the key features associated with the disk fragmentation model -- large-scale arms and arcs surrounding four young stars undergoing luminous outbursts, including the prototype FU Orionis star itself. The results of this study were accepted for publication in Science Advances - a peer-review, open-access journal belonging to the Science publishing group.

"This is a major step towards our understanding of how stars and planets form and evolve", says Vorobyov, "If we can prove that most stars undergo such episodes of brightening caused by disk gravitational instability, this would mean that our own Sun might have experienced several such episodes, implying that the giant planets of the Solar system may in fact be lucky survivors of the Sun's tempestuous past".