Children’s singer and songwriter Raffi may have brought beluga whales into popular culture with his 1980 song “Baby Beluga,” but surprisingly little is actually known about the life and ecology of these elusive marine mammals that live in some of the world’s most remote, frigid waters.

Two distinct populations spend winters in the Bering Sea, then move north as sea ice melts and open water allows them passage into the Beaufort and Chukchi seas. There they feast on Arctic cod, frequently diving to depths of 200 to 300 meters — and sometimes over 900 meters (0.5 miles) — to find food. 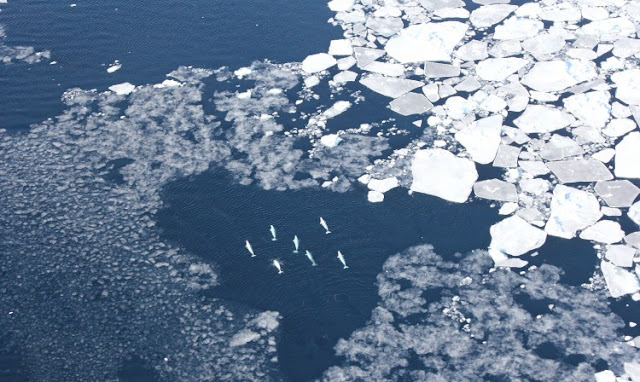 As the Arctic continues to change due to rising temperatures, melting sea ice and human interest in developing oil and shipping routes, it’s important to understand belugas’ baseline behavior, argue the authors of a new paper published this winter in the journal Marine Ecology Progress Series. Its authors drew upon a rare dataset that spans 15 years of dive information for 30 whales to produce a comprehensive analysis of beluga migration and feeding patterns in the Arctic.

“This study gives us a benchmark of the distribution and foraging patterns for these two beluga populations,” said lead author Donna Hauser, a doctoral student in the University of Washington’s School of Aquatic and Fishery Sciences. “However, there still needs to be additional work to see how beluga behavior has changed in concert with changing sea ice conditions in the Arctic.”

Beginning in 1993, researchers worked with Alaska Native communities in Northwest Alaska and Aboriginal tribes in Canada to tag beluga whales. The whales often swim close to shore during early summer, making it possible to capture a whale and attach a satellite-linked tag to the dorsal ridge along its back.

The tags are designed to turn on when the whale surfaces to breathe, then transmit locations and dive depth to a satellite that then relays data back to researchers electronically. Tag technology has improved over time, with one tag remaining on a whale and transmitting data for 18 months.

“It’s a really fantastic system for getting relatively high-resolution information for these animals that spend most of their time underwater and offshore,” Hauser said. “In addition to their inaccessibility, these populations use remote areas of the Arctic, so they are generally hard animals to research.”

For this study, the researchers also looked at the distribution of Arctic cod, a primary food source for both beluga populations, and compared that data to the locations and depths where the whales dove. They found the whales most frequently dove to depths where Arctic cod congregate (200-300 meters or 650-1,000 feet), confirming these fish are a significant source of food for belugas, and that the whales will dive to depths that maximize their encounters with prey.

The data evidenced this second finding by recording diving behavior that was all over the map, literally. Both beluga populations frequently dove to the bottom of the sea to feed on bottom-dwelling organisms in the northern Bering Sea and Chukchi Sea, but then dove in more mid-depth ranges along areas that sloped from shallow to deep. They were likely looking for opportunities to eat based on where prey was concentrated by oceanographic features, Hauser said.
Belugas observed among West Greenland sea ice.

Ultimately, this study helps illuminate aspects of a yearly migration that spans thousands of kilometers in a region that’s experiencing rapid change.

“The results of this work can be used not only to understand ecological relationships for Arctic top predators but also inform the management of beluga whales, which are an important subsistence resource for northern communities,” said co-author Kristin Laidre, a UW assistant professor of aquatic and fishery sciences.

The researchers will look next at how the timing of beluga fall migration south may be affected by later sea ice freeze-up in the northern Arctic under climate change.

Beluga tagging was funded and supported by a number of organizations, including the Alaska Beluga Whale Committee, village of Point Lay, North Slope Borough and National Marine Fisheries Service (see the paper for a full list). Funding for Hauser’s analysis came from the National Science Foundation through UW’s Integrative Graduate Education and Research Traineeship (IGERT) Program on Ocean Change.


Contacts and sources:
Michelle Ma
University of Washington
on February 15, 2016