An international team composed of researchers from Finland, France, the United States and the Czech Republic originally set out to construct a state-of-the-art model of the NEO population that is needed for planning future asteroid surveys and spacecraft missions. The model describes the NEOs' orbit distribution and estimates the number of NEOs of different sizes.

The vast majority of NEOs originate in the doughnut-shaped main asteroid belt between the orbits of Mars and Jupiter. The orbit of a main-belt asteroid slowly changes as it is pushed by the uneven release of excess solar heat from the asteroid's surface. The asteroid's orbit eventually interacts with the orbital motions of Jupiter and Saturn changing the trajectory to bring the asteroid close to the Earth. An asteroid is classified as an NEO when its smallest distance from the Sun during an orbit is less than 1.3 times the average Earth-Sun distance.

The actual mechanism causing asteroids to disrupt is still unknown but some obvious scenarios such as tidal forces caused by the Sun and direct sublimation of silicates have been ruled out. One of the remaining scenarios is that volatiles inside the asteroid sublimate at moderate temperatures and create enough pressure to blow up the body. A similar process on a smaller scale called spalling can also break up surface rocks.

An artist's conception of a complete disintegration of an asteroid as a result of repeated close encounters with the Sun. 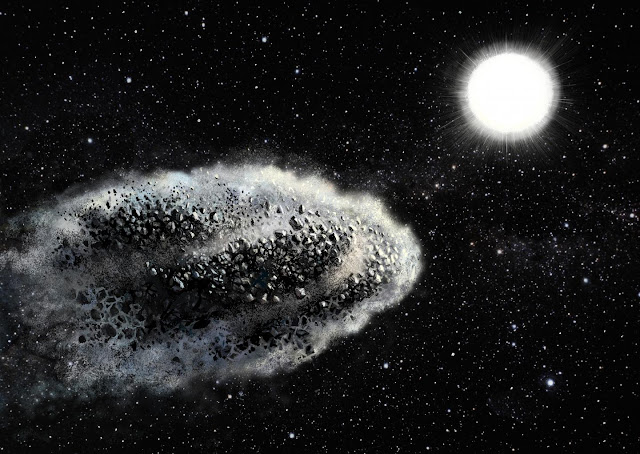 The team used the properties of almost 9,000 NEOs detected in about 100,000 images acquired over about 8 years by the Catalina Sky Survey (CSS) near Tucson, Arizona, to construct the new population model. One of the most challenging problems facing the team was computing which asteroids they could actually detect.

An asteroid appears as a moving point of light against a background of fixed stars but detecting it on an image depends on two factors - how bright it is and how fast it seems to be moving. If the telescope isn't looking in the right location at the right time when an asteroid is bright enough and slow enough to be detected, we simply may never find that asteroid.

Accounting for these observational selection effects required a detailed understanding of the operations of the telescope and detector systems and a tremendous amount of computing time even with novel, fast mathematical techniques. The team produced the best-ever model of the NEO population by combining information about CSS's selection effects with the CSS data and theoretical models of the orbit distributions of NEOs that originate in different parts of the main asteroid belt.

But they noticed that their model had a problem - it predicted that there should be almost 10 times more objects on orbits that approach the Sun to within 10 solar diameters. The team then spent a year verifying their calculations before they came to the conclusion that the problem was not in their analysis but in their assumptions of how the Solar System works.

Prediscovery image of asteroid 1999 AN10 taken from the Palomar Digital Sky Survey. The faint streak is the trail left by the asteroid. The image has been contrast-enhanced.

Dr. Mikael Granvik, a research scientist at the University of Helsinki and lead author of the Nature article, hypothesized that their model would better match the observations if NEOs are destroyed close to the Sun but long before an actual collision. The team tested this idea and found an excellent agreement between the model and the observed population of NEOs when they eliminated asteroids that spend too much time within about 10 solar diameters of the Sun. "

The discovery that asteroids must be breaking up when they approach too close to the Sun was surprising and that's why we spent so much time verifying our calculations," commented Dr. Robert Jedicke, a team member at the University of Hawai'i Institute for Astronomy. 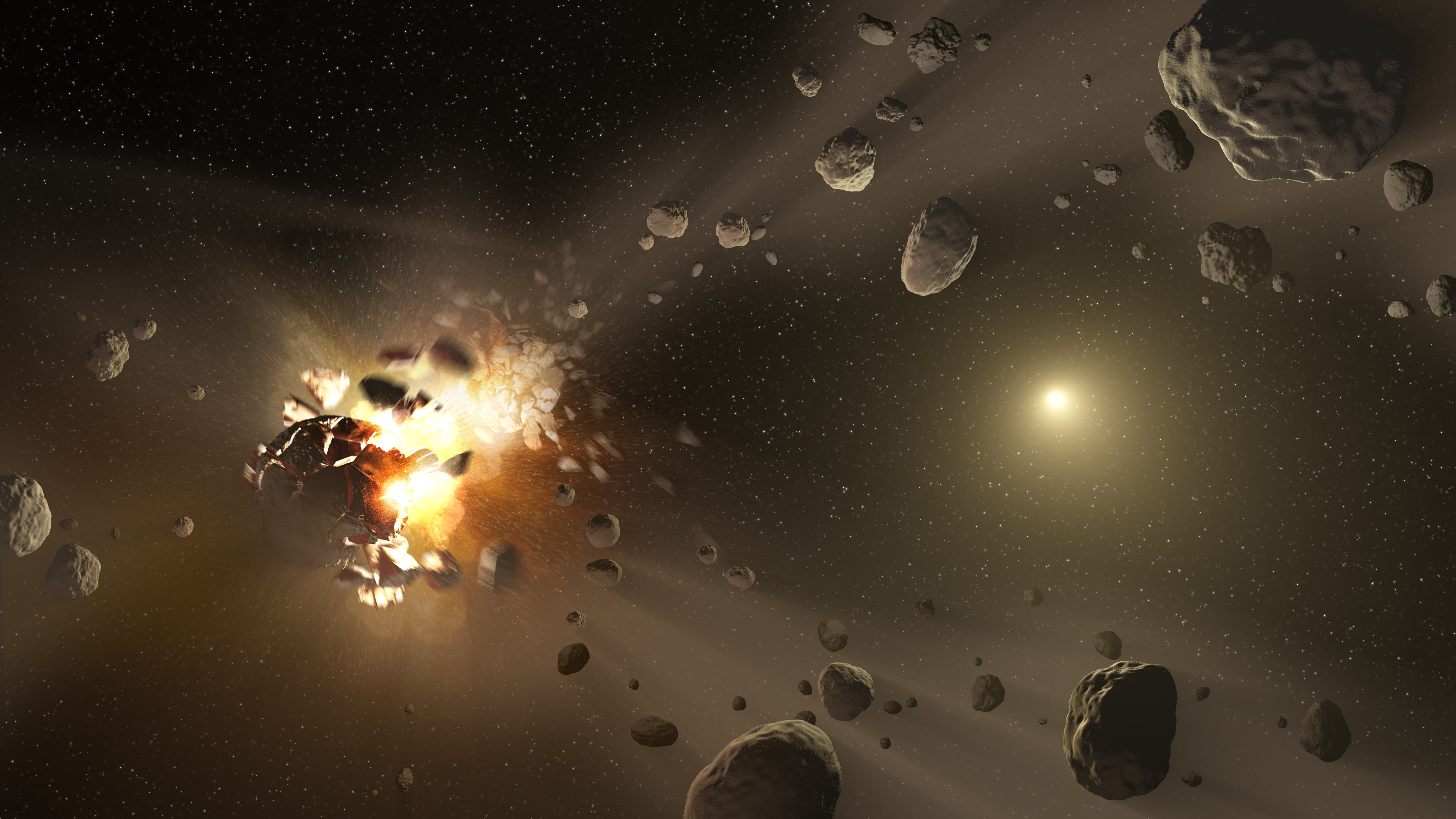 The team's discovery helps to explain several other discrepancies between observations and predictions of the distribution of small objects in our Solar System. Meteors, commonly known as shooting stars, are tiny bits of dust and rock that are dislodged from the surfaces of asteroids and comets that then end their lives burning up as they enter our atmosphere. Meteors often travel in "streams" that follow the path of their parent object, but astronomers have been unable to match most of the meteor streams on orbits closely approaching the Sun with known parent objects.

This study suggests that the parent objects were completely destroyed when they came too close to the Sun - leaving behind streams of meteors but no parent NEOs. They also found that darker asteroids are destroyed farther from the Sun than brighter ones, explaining an earlier discovery that NEOs that approach closer to the Sun are brighter than those that keep their distance from the Sun. The fact that dark objects are more easily destroyed implies that dark and bright asteroids have a different internal composition and structure.

Positions of all numbered asteroids and all numbered comets on 2009 January 1. The orbits and positions of the planets Mercury, Venus, Earth, Mars, and Jupiter are also shown. Asteroids are yellow dots and comets are symbolized by sunward-pointing wedges

According to Granvik, their discovery of the catastrophic loss of asteroids before a collision with the Sun allows planetary scientists to understand a variety of recent observations from a new perspective but also leads to a more profound advance in asteroid science:

"Perhaps the most intriguing outcome of this study is that it is now possible to test models of asteroid interiors simply by keeping track of their orbits and sizes. This is truly remarkable and was completely unexpected when we first started constructing the new NEO model."

About the near-Earth-object population modeling project

The project achieved its aim of developing a new near-Earth-object population model that can be used for scientific and technical purposes.