Researchers at the University of Warwick have worked with Coventry-based Medherant, a Warwick spinout company, to produce and patent the World’s first ever ibuprofen patch delivering the drug directly through skin to exactly where it is needed at a consistent dose rate.

They have invented a transparent adhesive patch that can consistently deliver a prolonged high dose of the painkiller ibuprofen directly through the skin. The University of Warwick researchers and Medherant have found a way to incorporate significant amounts of the drug (up to 30% weight) into the polymer matrix that sticks the patch to the patient’s skin with the drug then being delivered at a steady rate over up to 12 hours. 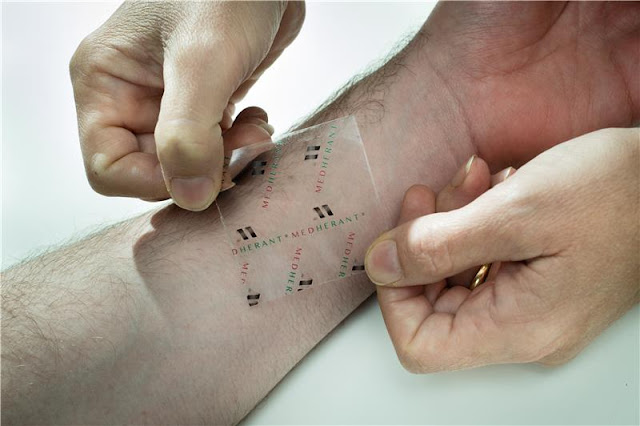 This opens the way for the development of a range of novel long-acting over-the-counter pain relief products which can be used to treat common painful conditions like chronic back pain, neuralgia and arthritis without the need to take potentially damaging doses of the drug orally. Although there are a number of popular ibuprofen gels available these make it difficult to control dosage and are inconvenient to apply.

This novel patch incorporates polymer technology developed by the global adhesive company Bostik and exclusively licensed for transdermal use to Medherant.

The key features of Medherant’s new patch technology are:

The patch remains highly tacky and thus adheres well to skin even when the drug load reaches levels as high as 30% of the weight/volume of the patch. The drug load made possible by this new technology can be 5 -10 times than that found in some currently used medical patches and gels.

High drug load and a consistent drug release profile means the Medherant patches out-perform other patches and gels in their ability to deliver a consistent and significant dose of drug over a prolonged time from a small patch.

It is a cosmetically pleasing transparent design with stronger adhesion than other commercial products – remaining stuck over its time of action but easy and comfortable to remove.

“Many commercial patches surprisingly don’t contain any pain relief agents at all, they simply soothe the body by a warming effect. Our technology now means that we can for the first time produce patches that contain effective doses of active ingredients such as ibuprofen for which no patches currently exist. Also, we can improve the drug loading and stickiness of patches containing other active ingredients to improve patient comfort and outcome.” 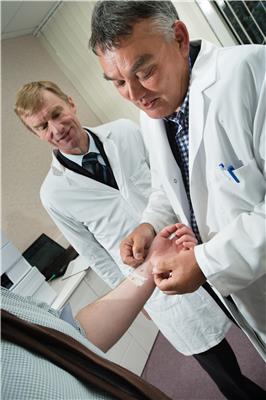 “There are only a limited number of existing polymers that have the right characteristics to be used for this type of transdermal patches - that will stick to the skin and not leave residues when being easily removed. Furthermore, there are also only a limited number of drugs that will dissolve into these existing polymers. Medherant’s technology now opens up the field of transdermal drug delivery to previously non-compatible drugs.”

“Our success in developing this breakthrough patch design isn’t limited to ibuprofen; we have also had great results testing the patch with methyl salicylate (used in liniments, gels and some leading commercial patches). We believe that many other over the counter and prescription drugs can exploit our technology and we are seeking opportunities to test a much wider range of drugs and treatments within our patch.”

“Our transdermal patch technology expands the range of drugs that can be delivered via skin patches and can significantly increase drug loading capabilities, whilst retaining adhesion and being thin and flexible. Thus our patches provide a better experience for patients, enhance safety and deliver increased efficacy, which will lead to economic benefits to the healthcare system.”

“Our first products will be over-the-counter pain relief patches and through partnering we would expect to have the first of those products on the market in around 2 years. In addition to our pain relief products, our technology also works with drugs in many other therapeutic areas. We can see considerable opportunities in working with pharmaceutical companies to develop innovative products using our next generation transdermal drug-delivery platform.”