A protein activated by vitamin D could be involved in repairing damage to myelin in people with multiple sclerosis (MS), according to new research from the University of Cambridge. The study, published today in the Journal of Cell Biology, offers significant evidence that vitamin D could be a possible treatment for MS in the future.

Researchers, from the MS Society Cambridge Centre for Myelin Repair, identified that the ‘vitamin D receptor’ protein pairs with an existing protein, called the RXR gamma receptor, already known to be involved in the repair of myelin, the protective sheath surrounding nerve fibres.


Neuron with oligodendrocyte and myelin sheath 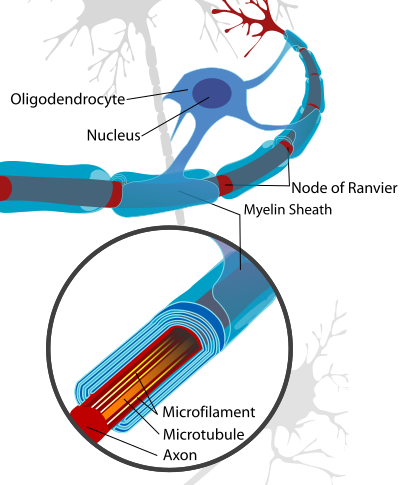 In MS, the body’s own immune system attacks and damages myelin, causing disruption to messages sent around the brain and spinal cord; symptoms are unpredictable and include problems with mobility and balance, pain, and severe fatigue. The body has a natural ability to repair myelin, but with age this becomes less effective.

Professor Robin Franklin from the MS Society Cambridge Centre for Myelin Repair and the Wellcome Trust-Medical Research Council Stem Cell Institute, who led the study, says: “For years scientists have been searching for a way to repair damage to myelin. So far, the majority of research on vitamin D has looked at its role in the cause of the disease. This work provides significant evidence that vitamin D is also involved in the regeneration of myelin once the disease has started. In the future we could see a myelin repair drug that works by targeting the vitamin D receptor.”

Dr Susan Kohlhaas, Head of Biomedical Research at the MS Society, said: “More than 100,000 people in the UK have multiple sclerosis and finding treatments that can slow, stop or reverse the worsening of disability is a priority for the MS Society. We’d now like to see more studies to understand whether taking vitamin D supplements could, in time, be an effective and safe treatment for people with MS.

She continued: “For now though, this is early stage research that’s been done in the laboratory and more work is needed before we know whether it would hold true in people with MS. It’s not a good idea, however, to be deficient in vitamin D and we’d encourage anybody who thinks they might be to speak to their GP.”

Following this research, scientists will need to understand more about the underlying biology of this receptor before considering how the vitamin D receptor could be safely and effectively targeted in future trials in people with MS.