We know we share a common ancestor with Neanderthals, the extinct species that were our closest prehistoric relatives. But what this ancient ancestral population looked like remains a mystery, as fossils from the Middle Pleistocene period, during which the lineage split, are extremely scarce and fragmentary.

This is the 'virtual fossil' of last common ancestor of humans and Neanderthals as hypothesized in the new study.

Now, researchers have applied digital 'morphometrics' and statistical algorithms to cranial fossils from across the evolutionary story of both species, and recreated in 3D the skull of the last common ancestor of Homo sapiens and Neanderthals for the first time.

New digital techniques have allowed researchers to predict structural evolution of the skull in the lineage of Homo sapiens and Neanderthals, in an effort to fill in blanks in the fossil record, and provide the first 3D rendering of their last common ancestor. Here, lead researcher Dr. Aurélien Mounier from Cambridge's Leverhulme Centre for Human Evolutionary Studies describes part of the research that led to this 'virtual fossil'.

The 'virtual fossil' has been simulated by plotting a total of 797 'landmarks' on the cranium of fossilised skulls stretching over almost two million years of Homo history -- including a 1.6 million-year-old Homo erectus fossil, Neanderthal crania found in Europe and even 19th century skulls from the Duckworth collection in Cambridge.

The landmarks on these samples provided an evolutionary framework from which researchers could predict a timeline for the skull structure, or 'morphology', of our ancient ancestors. They then fed a digitally-scanned modern skull into the timeline, warping the skull to fit the landmarks as they shifted through history.

This allowed researchers to work out how the morphology of both species may have converged in the last common ancestor's skull during the Middle Pleistocene -- an era dating from approximately 800 to 100 thousand years ago.

The team generated three possible ancestral skull shapes that corresponded to three different predicted split times between the two lineages. They digitally rendered complete skulls and then compared them to the few original fossils and bone fragments of the Pleistocene age.

This enabled the researchers to narrow down which virtual skull was the best fit for the ancestor we share with Neanderthals, and which timeframe was most likely for that last common ancestor to have existed.

Previous estimates based on ancient DNA have predicted the last common ancestor lived around 400,000 years ago. However, results from the 'virtual fossil' show the ancestral skull morphology closest to fossil fragments from the Middle Pleistocene suggests a lineage split of around 700,000 years ago, and that -- while this ancestral population was also present across Eurasia -- the last common ancestor most likely originated in Africa.

The results of the study are published in the Journal of Human Evolution.

"We know we share a common ancestor with Neanderthals, but what did it look like? And how do we know the rare fragments of fossil we find are truly from this past ancestral population? Many controversies in human evolution arise from these uncertainties," said the study's lead author Dr Aurélien Mounier, a researcher at Cambridge University's Leverhulme Centre for Human Evolutionary Studies (LCHES). 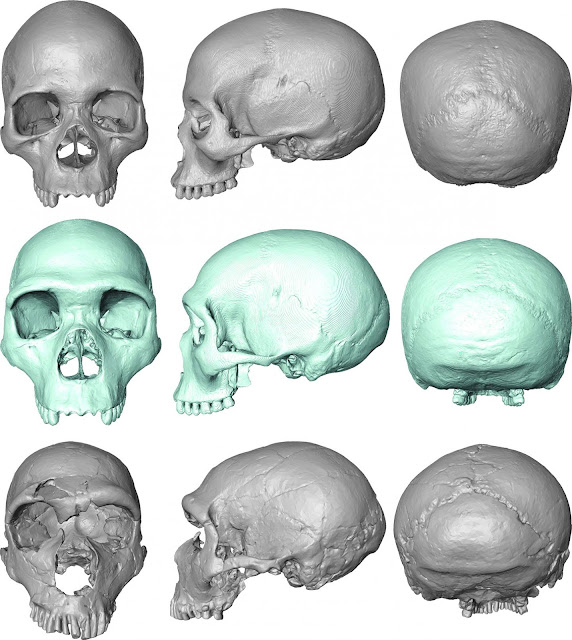 "We wanted to try an innovative solution to deal with the imperfections of the fossil record: a combination of 3D digital methods and statistical estimation techniques. This allowed us to predict mathematically and then recreate virtually skull fossils of the last common ancestor of modern humans and Neanderthals, using a simple and consensual 'tree of life' for the genusHomo," he said.

The virtual 3D ancestral skull bears early hallmarks of both species. For example, it shows the initial budding of what in Neanderthals would become the 'occipital bun': the prominent bulge at the back of the skull that contributed to elongated shape of a Neanderthal head.

However, the face of the virtual ancestor shows hints of the strong indention that modern humans have under the cheekbones, contributing to our more delicate facial features. In Neanderthals, this area -- the maxillia -- is 'pneumatized', meaning it was thicker bone due to more air pockets, so that the face of a Neanderthal would have protruded.

Research from New York University published last week showed that bone deposits continued to build on the faces of Neanderthal children during the first years of their life.

The heavy, thickset brow of the virtual ancestor is characteristic of the hominin lineage, very similar to early Homo as well as Neanderthal, but lost in modern humans. Mounier says the virtual fossil is more reminiscent of Neanderthals overall, but that this is unsurprising as taking the timeline as a whole it is Homo sapiens who deviate from the ancestral trajectory in terms of skull structure.

"The possibility of a higher rate of morphological change in the modern human lineage suggested by our results would be consistent with periods of major demographic change and genetic drift, which is part of the history of a species that went from being a small population in Africa to more than seven billion people today," said co-author Dr Marta Mirazón Lahr, also from Cambridge's LCHES.

The population of last common ancestors was probably part of the species Homo heidelbergensis in its broadest sense, says Mounier. This was a species of Homo that lived in Africa, Europe and western Asia between 700 and 300 thousand years ago.

For their next project, Mounier and colleagues have started working on a model of the last common ancestor of Homo and chimpanzees. "Our models are not the exact truth, but in the absence of fossils these new methods can be used to test hypotheses for any palaeontological question, whether it is horses or dinosaurs," he said.

Contacts and sources:
Fred Lewsey
University of Cambridge
on December 23, 2015