In April 2015, after traveling for about half the age of the universe, a flood of powerful gamma rays from a distant galaxy slammed into Earth's atmosphere. That torrent generated a cascade of light - a shower that fell onto the waiting mirrors of the Very Energetic Radiation Imaging Telescope Array System (VERITAS) in Arizona. The resulting data have given astronomers a unique look into that faraway galaxy and the black hole engine at its heart.

Gamma rays are photons of light with very high energies. These gamma rays came from a galaxy known as PKS 1441+25, which is a rare type of galaxy known as a blazar. At its center it hosts a supermassive black hole surrounded by a disk of hot gas and dust.

As material from the disk swirls toward the black hole, some of it gets channeled into twin jets that blast outward like water from a fire hose only much faster - close to the speed of light. One of those jets is aimed nearly in our direction, giving us a view straight into the galaxy's core.

This artist's conception shows a blazar -- the core of an active galaxy powered by a supermassive black hole. The VERITAS array has detected gamma rays from a blazar known as PKS 1441+25. Researchers found that the source of the gamma rays was within the relativistic jet but surprisingly far from the galaxy's black hole. The emitting region is at least a tenth of a light-year away, and most likely is 5 light-years away. 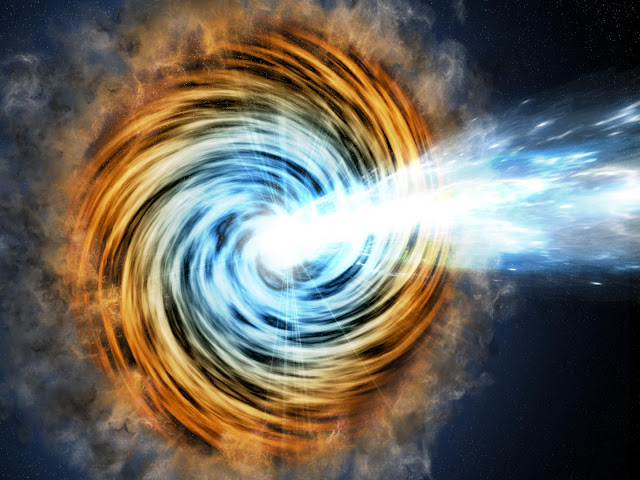 "We're looking down the barrel of this relativistic jet," explains Wystan Benbow of the Harvard-Smithsonian Center for Astrophysics (CfA). "That's why we're able to see the gamma rays at all."
One of the unknowns in blazar physics is the exact location of gamma-ray emission. Using data from VERITAS, as well as the Fermi Gamma-Ray Space Telescope, the researchers found that the source of the gamma rays was within the relativistic jet but surprisingly far from the galaxy's black hole. The emitting region is at least a tenth of a light-year away, and most likely is 5 light-years away. (A light-year is the distance light travels in one year, or about 6 trillion miles.)

Moreover, the region emitting gamma rays was larger than typically seen in an active galaxy, measuring about a third of a light-year across.

"These jets tend to have clumps in them. It's possible that two of those clumps may have collided and that's what generated the burst of energy," says co-author Matteo Cerruti of the CfA.

Measuring high-energy gamma rays at all was a surprise. They tend to be either absorbed at the source or on their long journey to Earth. When the galaxy flared to life, it must have generated a huge flood of gamma rays.

The finding also provides insight into a phenomenon known as extragalactic background light or EBL, a faint haze of light that suffuses the universe. The EBL comes from all the stars and galaxies that have ever existed, and in a sense can track the history of the universe.

The EBL also acts like a fog to high-energy gamma rays, absorbing them as they travel through space. This new measurement sets an indirect limit on how abundant the EBL can be - too much, and it would have absorbed the gamma-ray flare. The results complement previous measurements based on direct observations.