The wood in the monumental "great houses" built in Chaco Canyon by ancient Puebloans came from two different mountain ranges, according to new research from the University of Arizona Laboratory of Tree-Ring Research.

Chetro Ketl, built during the 10th and 11th centuries, is one of the largest great houses in Chaco Canyon, New Mexico. Despite the harsh, high-desert environment, thousands of people once lived in and around what is now a World Heritage Site at Chaco Culture National Historical Park. 
The UA scientists are the first to report that before 1020, most of the wood came from the Zuni Mountains about 50 miles (75 km) to the south. The species of tree used in the buildings did not grow nearby, so the trees must have been transported from distant mountain ranges.

About 240,000 trees were used to build massive structures, some five stories high and with hundreds of rooms, in New Mexico's arid, rocky Chaco Canyon during the time period 850 to 1140. The buildings include some of the largest pre-Columbian buildings in North America.

To figure out where the trees for the beams had grown, Guiterman used a method known as dendroprovenance that had not been used in the American Southwest before.

By 1060, the Chacoans had switched to harvesting trees from the Chuska Mountains about 50 miles (75 km) to the west.

This photo from the 1930s shows the back wall of Pueblo Bonito, the largest structure found in Chaco Canyon, New Mexico. Archaeologists estimate the intact structure was 5 stories high and had about 500 rooms. University of Arizona tree-ring studies of building's wooden beams revealed the structure was built in phases from 850 to 1120. 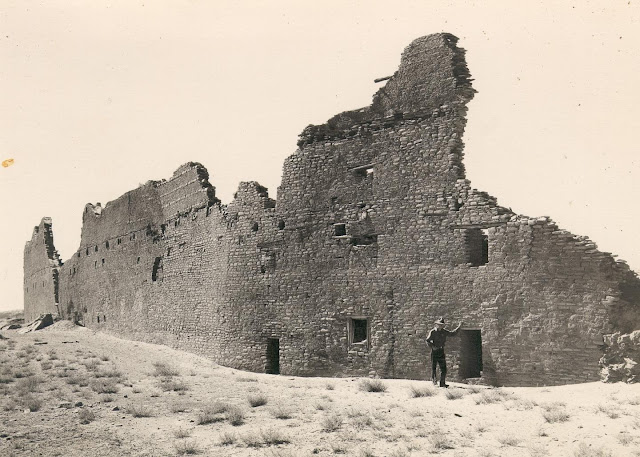 The switch in wood sources coincides with several important developments in Chacoan culture, said Guiterman, a doctoral candidate in UA's School of Natural Resources and the Environment.

"There's a change in the masonry style--the architectural signature of the construction. There's a massive increase in the amount of construction--about half of 'downtown Chaco' houses were built at the time the wood started coming from the Chuska Mountains," he said.

By reviewing archaeological records, the team found other materials coming to Chaco from the Chuskas at the same time.

The new research corroborates previous research from the UA that used the chemistry of Chaco Canyon beams to figure out that Chuska Mountain trees were a wood source.

Guiterman, UA Regents' Professor Emeritus Thomas Swetnam and UA Professor Emeritus Jeffrey Dean will publish their paper, "Eleventh-Century Shift in Timber Procurement Areas for the Great Houses of Chaco Canyon," in an upcoming issue of the Proceedings of the National Academy of Sciences.

To learn how ancient people interacted with Southwestern forests, Guiterman and Swetnam decided to study the wood used in Chaco Canyon buildings.

Guiterman wondered if the annual growth rings of trees could reveal the origin of beams. Doing such a study would also test the results from the chemical method of determining the wood's source.

He decided to try the dendroprovenance technique, which has been used in Europe to figure out the source of wood in artifacts.

Guiterman had the necessary materials at hand: Laboratory of Tree-Ring Research founder A.E. Douglass and his student Emil Haury collected wood from ancient Puebloan structures and nearby mountain ranges throughout the Southwest starting in the 1920s and used the material to date the great ruins of the Southwest.

Chris Baisan of the University of Arizona's Laboratory of Tree-Ring Research samples a dead tree in New Mexico's Chuska Mountains. The tree dates from the time that ancient Puebloans were building massive structures in Chaco Canyon, about 50 miles away. 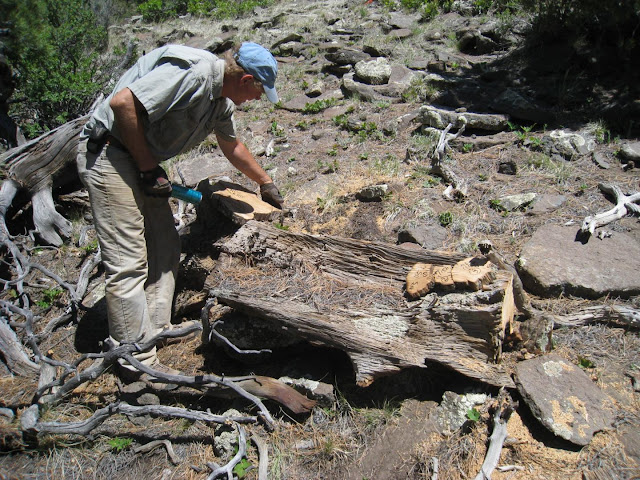 Douglass' and Haury's dated samples are archived in the laboratory's basement, along with wood collected all over the Southwest ever since by legions of archaeologists, including dendroarchaeologist Dean.

"We pulled stuff out of the archive that hasn't been looked at in 30 or 40 years," he said. "It was pretty cool to open those boxes."

The annual growth rings in trees reflect regional climate--rings are wider in good growing years and thinner in bad ones. The patterns of thick-and-thin rings in trees that grow in the mountain ranges that surround Chaco Canyon are similar because the climate is the same.

However, each mountain range has slightly different conditions. Therefore, growth patterns of trees from one mountain range are not identical to those of trees in nearby ranges.

To pinpoint the origin of a tree that became a building beam, the dendroprovenance method requires finding a strong match between the tree-ring patterns in a beam and the average tree-ring patterns from trees of the same age known to be from a particular mountain range.

It sounds easy, but the work is painstaking. Guiterman had to compare the patterns on 170 individual beams with archived tree-ring patterns from seven different nearby mountain ranges.

The task took him four years.

Swetnam said, "We think this is a powerful new method to use in the Southwest. We tested the method using modern trees and could determine their source of origin with 90 percent accuracy."

More than 70 percent of the 170 timbers were from the Zuni or Chuska mountain ranges. Guiterman said the 11th-century switch to the Chuskas coincided with an expansion of the Chacoan culture and indicates the cultural importance of that mountain range.

"We're learning more and more about what these people did so long ago and how they utilized and interacted with their environment," he said.

One possible next step, Guiterman said, is looking for the source of beams in other ancient Puebloan structures in the region.