Astronomers using the Atacama Large Millimeter/submillimeter Array (ALMA) have discovered the most tenuous molecular gas ever observed. They detected the absorption of radio waves by gas clouds in front of bright radio sources. This radio shadow revealed the composition and conditions of diffuse gas in the Milky Way galaxy. 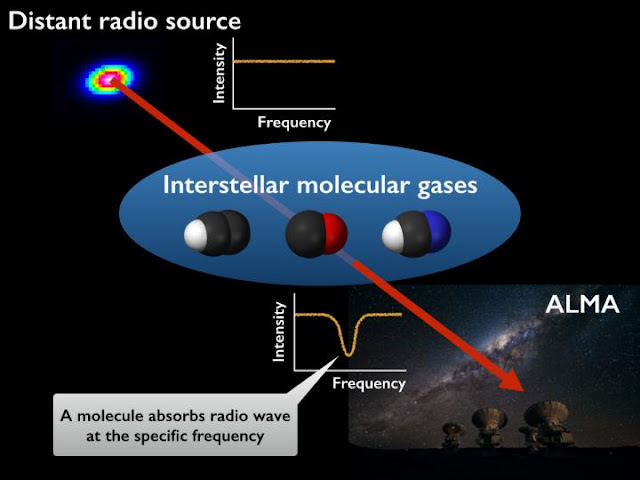 To calibrate its systems, ALMA looks at objects emitting strong radio waves (radio 'bright' objects). On rare occasions, the signals from distant calibrator sources have specific radio frequencies absorbed out of them by foreground gas. This process is similar to how a piece of tinted glass casts a colored shadow when light passes through it. These absorption features contain valuable information about the intervening gas clouds which absorbed the radio signals. However, the number of known molecular absorption systems seen in millimeter/submillimeter waveband has been very limited: only about 30 in the Milky Way galaxy and a limited number in other galaxies.

Thanks to its high sensitivity, ALMA detects many absorption lines caused by various molecules such as HCN and HCO+. 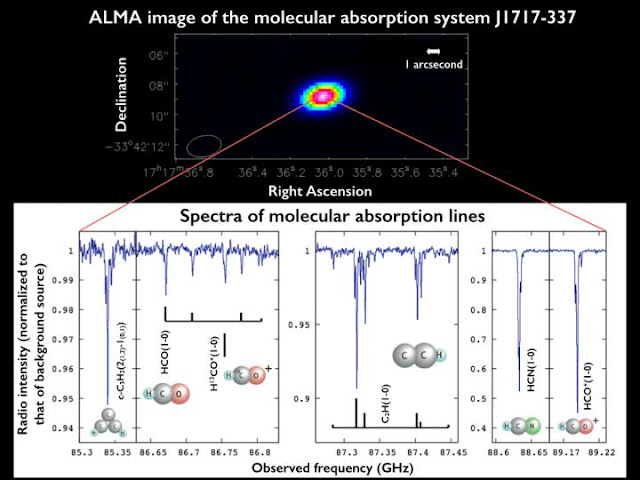 Absorption systems allow researchers to investigate very tenuous gas clouds. A gas cloud too diffuse to emit sufficient radio waves to be detected can still absorb enough radio waves to produce a detectable radio shadow. The team estimated that the amount of HCO in the cloud backlit by NRAO530 is only half that of other known systems. This shows that it is one of the most diffuse gas clouds ever discovered in the Milky Way galaxy. Even though astronomers assume that tenuous gas clouds account for a considerable fraction of the total mass of the Milky Way galaxy, very little is known about them.

The absorption signals help us determine the environment around the foreground gas clouds. HCO molecules are thought to be formed in special environments full of intense ultraviolet light from giant young stars. The diffuse gas clouds backlit by J1717-337 and NRAO530 show chemical composition similar to the gas in active star forming regions, indicating that the diffuse gas is bathed in strong ultraviolet light. Astronomers believe that ultraviolet light affects the properties of diffuse clouds. The HCO absorption systems found by ALMA provide an opportunity to verify that idea.

The HCO absorption lines in J1717-337 (red) and NRAO530 (orange) were detected for the first time by this research. For comparison, we plot the three previously known HCO absorption systems (green), five photo-dissociation regions (blue), and a cold molecular cloud core (purple). The abundances are shown in column density, which indicates the number of molecules integrated along the line of sight towards a source. The ratio of HCO to H13CO+ indicates the strength of the ultraviolet light. 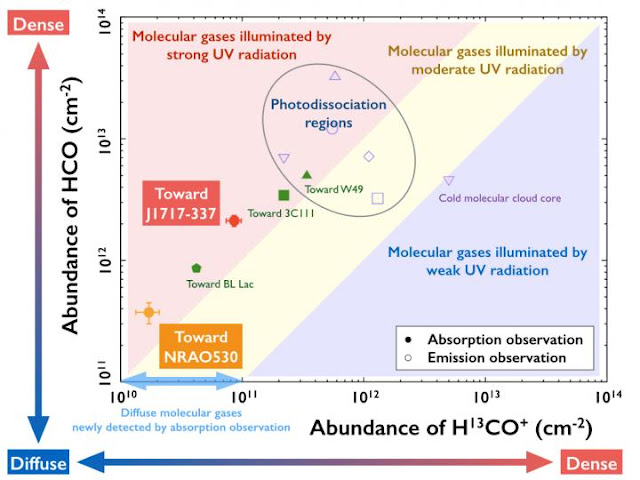 
Contacts and sources:
The University of Tokyo
National Astronomical Observatory of Japan.

This observation result was published as Ando et al. 'New detections of Galactic molecular absorption systems toward ALMA calibrator sources' in the Publications of the Astronomical Society of Japan, issued in December 2015.
on December 07, 2015