For scientists studying the impacts of space weather, one of the central mysteries of solar flares - the colossal release of magnetic energy in the Sun's atmosphere that erupts with the force of millions of hydrogen bombs - is the means by which these explosions produce radiation and accelerate particles to nearly the speed of light within seconds. The most powerful blasts dispatch energized particles that can penetrate Earth's atmosphere within an hour, disrupting orbiting satellites and electronic communications on the ground.

In an article published in Science magazine this week, "Particle acceleration by a solar flare termination shock," solar scientists at several institutions, including NJIT, have shed light on an elusive structure known as a termination shock that is believed to play a key role in converting released magnetic energy from flares into kinetic energy in accelerated particles. Through a recent set of observations captured by a large radio telescope, the Jansky Very Large Array, they have imaged a shock and its time evolution during a long-lasting solar flare and demonstrated its role in accelerating particles.

This image shows the speed of fast plasma outflows produced by the flare. The termination shock is shown as a transition layer where the colors change abruptly from red/yellow to blue/green. At bottom is the Karl G. Jansky Very Large Array, which captured the termination shock in action using radio observations. 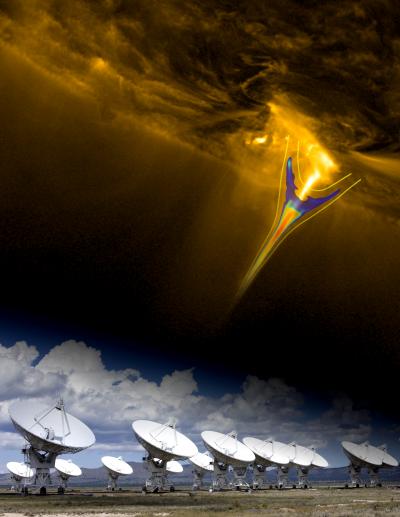 "Although predicted by theoretical models, this is the first time we have had direct images and movies showing the repeated formation, disruption, and reformation of a termination shock, enabling us to link it directly to particle acceleration," said Dale Gary, distinguished professor of physics at NJIT and one of the authors of the article. Bin Chen, an astrophysicist at the Harvard Smithsonian Center for Astrophysics who will join NJIT next January, is the article's lead author.

The powerful shocks occur when high-speed jets expelled from the explosive energy-release site of a solar flare collide with stationary plasma below. One surprising result is that, occasionally, some jets can disrupt the shock, after which the shock takes time to reform. During the disruptions, radio and X-ray emission due to accelerated particles is observed to decrease not just at the shock, but throughout the emitting region, showing that the shock is at least partly responsible for accelerating those particles.

The observations were made possible by the ability of the newly enhanced Karl G. Jansky Very Large Array in New Mexico to acquire the more than 40,000 individual images per second of observation needed to resolve the rapidly varying emission features produced by the termination shock. This level of resolved detail allowed the firm identification of the radio source as a shock and revealed its dynamic evolution. Chen developed the technique to visualize the shock dynamics from the millions of images taken during the event.

"Radio emission is an excellent means to study highly energized particles, because the particles emit radio waves very readily without losing much energy in the process. High-energy particles are not directly visible through optical solar telescopes, while they produce higher-energy X-ray photons mainly when the particles hit the surface of the Sun and release all of their energy," Gary said. "To better understand flares, it is important to detect the particles where they are produced, which is done through radio observations, in addition to where in the solar environment their energy is deposited, which is the role of optical, ultraviolet, and X-ray observations."

Solar flares erupt when stored magnetic energy is suddenly released and converted to other forms, such as high-energy particles, hot plasma at millions of degrees, intense electromagnetic radiation and plasma eruptions called coronal mass ejections (CMEs). Solar radiation from the primary flare and that generated secondarily from CMEs can affect Earth in many ways. The high-energy particles can destroy the electronic systems in satellites used in telecommunications, weather forecasting and navigation systems, among other services. The electromagnetic radiation can interfere directly with communication and navigation signals, ionize the atmosphere, and cause short-wave radio black-outs. Associated magnetic disturbances can also affect devices on the ground such as power transformers.

The study of flares began in 1859 following what is known as the Carrington Event, a solar flare and associated geomagnetic storm so powerful that it electrified telegraph wires, causing spark discharges that caught paper on fire, caused world-wide magnetic disturbances, and was visible across the globe in the form of auroras. That storm was by some estimates four orders of magnitude stronger than the flare described in the Sciencearticle.

"A flare the size of the Carrington event would pose real danger today because of our increasing reliance on susceptible technology," Gary said. "Big events are difficult to predict, however. We have ways of measuring energy build-up, but sometimes when we think a large flare will occur, the energy dissipates quietly or in a series of smaller events instead. Studies like ours provide better understanding of the fundamental processes occurring in flares, and may one day lead to better predictions."

NJIT is expanding its own, solar-dedicated radio telescope, the Expanded Owens Valley Solar Array, to observe the Sun every day with many of the same observational capabilities. Multi-frequency imaging with high frequency and time resolution will become a standard method of studying solar flares in the near future.