About 500 years ago, the accidental natural hybridization of Saccharomyces cerevisiae, the yeast responsible for things like ale, wine and bread, and a distant yeast cousin gave rise to lager beer.

Today, cold-brewed lager is the world's most consumed alcoholic beverage, fueling an industry with annual sales of more than $250 billion.

The first lagers depended on the serendipitous cross of Saccharomyces species as evolutionarily diverse as humans and chickens. The result, however, yielded a product of enormous economic value, demonstrating the latent potential of interspecies yeast hybrids. In nature, the odds of a similar hybridization event are, conservatively, one in a billion.

Orange-colored galls, such as these pictured in 2010, from the beech tree forests of Patagonia have been found to harbor the yeast that makes lager beer possible. Five hundred years ago, in the age of sail and when the trans-Atlantic trade was just beginning, the yeast somehow made its way from Patagonia to the caves and monastery cellars of Bavaria where the first lager beers were fermented. University of Wisconsin-Madison Genetics Professor Chris Todd Hittinger and colleagues have discovered a quick and efficient way to fuse different strains of yeast to make hybrids similar to the lager beer hybrid, an organism that underpins a $250 billion a year industry worldwide. 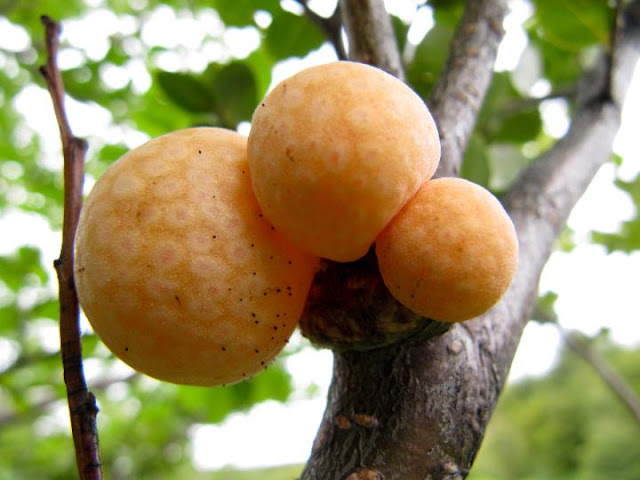 Now, thanks to a new method for making interspecies yeast hybrids in the lab, the makers of beer, wine, biofuels and other products that depend on yeasts may soon have many more strains of the microorganism to work with.

"We can achieve hybrids at rates of one in a thousand cells," notes William Alexander, a University of Wisconsin-Madison postdoctoral research associate and the lead author of a paper describing the new method in a special synthetic biology issue of the journal Fungal Genetics and Biology. "It is much more efficient than nature."

There are hundreds of known species of yeasts and they occupy almost every ecological niche imaginable worldwide. They are essential to the process of fermentation, where the microbes convert sugars to alcohol and carbon dioxide. Yeasts are used widely to not only make beer, wine and bread, but also cider, whiskey, cheese, yogurt, soy sauce and an array of other fermented foods and beverages. In industry, yeasts are used to produce biofuels and to make enzymes, flavors and pigments and even drugs such as human insulin.

An ability to quickly and efficiently churn out new yeast interspecies hybrids means industries that depend on yeasts will have many more organisms to experiment with to make new flavors, enhance production and produce entirely new products, explains Chris Todd Hittinger, a UW-Madison professor of genetics and the senior author of the new study.

For example, the happy marriage of Saccharomyces cerevisiae and its distant cousinSaccharomyces eubayanus, a species that inhabits tree galls in nature, permitted the cold-temperature fermentation that made lager beer possible.

The new yeast hybridization method uses plasmids, circles of DNA that can be built into an organism to confer a genetic quality. In the lab, plasmids are routinely used to manipulate genes in cells. Genes in the plasmids facilitate yeast hybridization by expressing a naturally occurring yeast protein that allows two distinct species of yeasts to mate.

"The advantages of the technique are speed, efficiency, and precision," says Hittinger, a world authority on yeast genetics and a co-discoverer of the wild Patagonian yeast that formed the lager beer hybrid. "Within a week, you can generate a large number of hybrids of whatever two species you want, creating forms never seen before."

The new study describes four new hybrids, one of which was made using a strain ofSaccharomyces eubayanus discovered near Sheboygan, Wis., after Hittinger and his colleagues first found the lager yeast parent in the alpine regions of Patagonia. The new hybrid is being tested in a new beer recipe in the UW-Madison Department of Food Science.

The new technique may also help industry overcome a creative bottleneck, as many industrial strains of yeasts are sterile, unable to produce spores.

"If you have a favorite ale strain, for example, you should easily be able to hybridize it with a wild strain using this method," Hittinger says. "There is a lot of potential out there for new flavors and combinations."

Finally, the plasmids used to facilitate the process of hybridization can be removed from the new hybrid yeasts, leaving the genomes of the two fused organisms unchanged.