New Understanding of How Shape and Form Develop In Nature

Researchers have developed a new method for generating complex shapes, and have found that the development of form in nature can be driven by the physical properties of materials themselves, in contrast with earlier findings. The results, reported in the journal Nature, could enable the construction of complex structures from simple components, with potential applications in pharmaceuticals, paints, cosmetics and household products such as shampoo.

Using a simple set-up -- essentially droplets of oil in a soapy water solution which were slowly frozen -- the researchers found that recently-discovered 'plastic crystal' phases formed on the inside surfaces of the droplets cause them to shape-shift into a wide variety of forms, from octahedrons and hexagons to triangles and fibres. 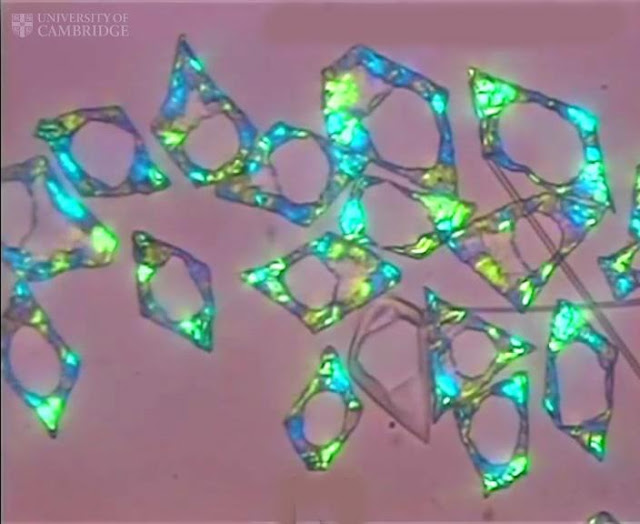 Previous efforts to create such complex shapes and structures have used top-down processing methods, which allow a high degree of control, but are not efficient in terms of the amount of material used or the expensive equipment necessary to make the shapes. The new method, developed by researchers from the University of Cambridge and Sofia University in Bulgaria, uses a highly efficient, extremely simple bottom-up approach to create complex shapes.

"There are many ways that non-biological things take shape," said Dr Stoyan Smoukov from Cambridge's Department of Materials Science & Metallurgy, who led the research. "But the question is what drives the process and how to control it -- and what are the links between the process in the biological and the non-biological world?"

Smoukov's research proposes a possible answer to the question of what drives this process, called morphogenesis. In animals, morphogenesis controls the distribution of cells during embryonic development, and can also be seen in mature animals, such as in a growing tumour.

In the 1950s, the codebreaker and mathematician Alan Turing proposed that morphogenesis is driven by reaction-diffusion, in which local chemical reactions cause a substance to spread through a space. More recent research, from Smoukov's group and others, has proposed that it is physical properties of materials that control the process. This possibility had been anticipated by Turing, but it was impossible to determine using the computers of the time.

What this most recent research has found is that by slowly freezing oil droplets in a soapy solution, the droplets will shape-shift through a variety of different forms, and can shift back to their original shape if the solution is re-warmed. Further observation found that this process is driven by the self-assembly of a plastic crystal phase which forms beneath the surface of the droplets.

"This plastic crystal phase seems to be what's causing the droplets to change shape, or break their symmetry," said Smoukov. "And in order to understand morphogenesis, it's vital that we understand what causes symmetry breaking."

The researchers found that by altering the size of the droplets they started with or the rate that the temperature of the soapy solution was lowered, they were able to control the sequence of the shapes the droplets ended up forming. This degree of control could be useful for multiple applications -- from pharmaceuticals to household goods -- that use small-droplet emulsions.

"The plastic crystal phase has been of intense scientific interest recently, but no one so far has been able to harness it to exert forces or show this variety of shape-changes," said the paper's lead author Professor Nikolai Denkov of Sofia University, who first proposed the general explanation of the observed transformations.

"The phenomenon is so rich in combining several active areas of research that this study may open up new avenues for research in soft matter and materials science," said co-author Professor Slavka Tcholakova, also of Sofia University.

"If we're going to build artificial structures with the same sort of control and complexity as biological systems, we need to develop efficient bottom-up processes to create building blocks of various shapes, which can then be used to make more complicated structures," said Smoukov. "But it's curious to observe such life-like behaviour in a non-living thing - in many cases, artificial objects can look more 'alive' than living ones."