Every toothed pterosaur identified from North America’s Cretaceous has been discovered in North Texas. New species marks only the third.


A new species of toothy pterosaur is a native of Texas whose closest relative is from England.

Pterosaur relatives from two continents suggests the prehistoric creatures moved between North America and England earlier in the Cretaceous — despite progressive widening of the North Atlantic Ocean during that time.

The Texas and English Cimoliopterus cousins are different species, so some evolutionary divergence occurred.

That indicates the populations were isolated from one another at 94 million years ago, Myers said.

The similarity between the two species, however, implies minimal divergence time, so gene flow between North American and European populations would have been possible at some point shortly before that date.

“The Atlantic opened the supercontinent Pangea like a zipper, separating continents and leaving animal populations isolated, so gene flow ceased and we start to see evolutionary divergence,” said Myers, a research assistant professor in the Roy M. Huffington Department of Earth Sciences at SMU. “Animals start to look different and you see different species on one continent versus another. Pterosaurs are a little trickier because unlike land animals they can fly and disperse across bodies of water. The later ones are pretty good flyers.”

Based on fossils discovered so far, it’s known that toothed pterosaurs are generally abundant during the Cretaceous in Asia, Europe and South America. But they are rare in North America.

Each of the Texas pterosaurs was discovered near Dallas.

“Given the small sample size, it’s odd that we have two that are so closely related to the English species,” Myers said. “It’s hard to draw any statistically significant conclusions from that, but it definitely indicates this is not a one-off, and that there was some relatively strong, significant connection. Two means a lot more than one in this case.”

Myers isn’t suggesting a land bridge. But scientists have suggested the sea level of the North Atlantic fluctuated over time.

“Pterosaurs don’t necessarily need land bridges to disperse because they can cross marine barriers between emergent landmasses, effectively ‘island hopping’ from one continental mass to another,” Myers said.

Nevertheless, identification of the new toothy Texas pterosaur deepens a mystery surrounding the flying reptiles: There still is no evidence of close ties between North American and South American pterosaur populations, he said.

“There are toothed pteranodontoids in South America — lots of individuals and lots of different species — but no close relatives to the toothed pteranodontoids in North America,” he said. “That might indicate there was some barrier to dispersal from the south. It’s unusual we don’t see a connection between these pterosaur populations. Maybe we will when we find more of this material.” 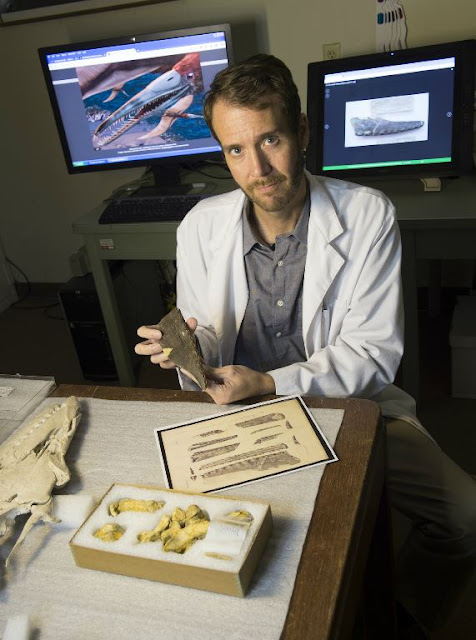 Myers reported the new species in the Journal of Vertebrate Paleontology in “First North American occurrence of the toothed pteranodontoid pterosaur Cimoliopterus.”

A long-lived group, whether toothy and small, or toothless and big

Pterosaurs were among the earliest vertebrates to steadily flap their wings to power their flying.

Early forms were toothy and had wingspans similar to a flying fox, while later they were toothless and as large as fighter jets.

Pterosaurs nested on land but their bones are often recovered from shallow marine rocks. Some species have slender, pointed teeth, suitable for a diet of fish.

“This group is very abundant around the world in the middle Cretaceous — except in North America. The only evidence we have of the toothed members comes from Texas,” Myers said. “In general we see a broad trend in pterosaurs away from teeth, so at the end of the Cretaceous all known species are toothless.”

The prehistoric Seaway covered the central United States and Canada, extending from the Gulf of Mexico to the Arctic Ocean.

Myers identified the new pterosaur from a partial upper jaw — specifically the tip of the blunt snout, or rostrum. The rostrum has sockets for 13 pair of teeth. Atop the snout is a thin, prominent crest that starts near the front and extends back. The crest is fully fused to the jaw, a good indicator the pterosaur was not a juvenile, Myers said.

“The crest is really striking,” he said. “It’s almost preserved in its entirety.”

Prolific amateur collector Brent Dunn discovered the upper jaw in January 2013 while walking the spillway of Lake Lewisville north of Dallas. The fossil, coated in reddish mud, had weathered out of the ground. The marine shale layer in which it was found is part of the Eagle Ford Group, a rock unit unique to Texas. 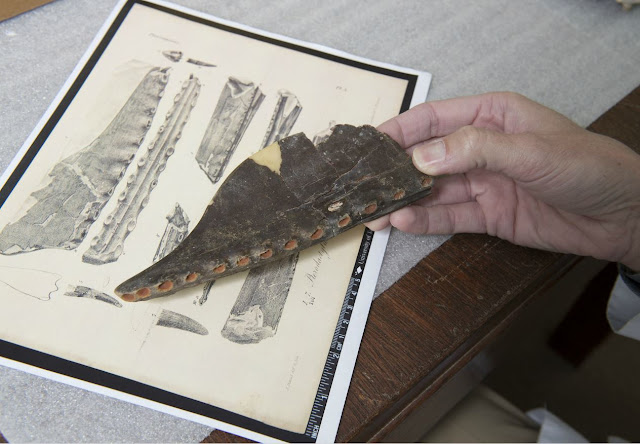 The fossil was found alongside ammonites and crustaceans, called index fossils, because they date the shale layer. Ammonites also indicate an open marine environment, with no fresh water influence.

Although Cimoliopterus dunni would have been large, it was mid-sized as pterosaurs go, with a wingspan of about 6 feet.

“It wouldn’t have been small and cute,” Myers said. “You would have thought twice about approaching it.”

It’s fortunate to have the beautifully preserved fossil because the potential for preserving pterosaur bones is low, Myers said. Their bones were light and hollow, filled with vacuities to help them fly, so they tend to crush easily and break into pieces. “So their normal cylindrical bone is pancaked flat,” he said.

Dunn, a long-time member of the Dallas Paleontological Society, donated it to SMU’s Shuler Museum of Paleontology. He died in 2013. Myers named the fossil for Dunn. —