Ceres reveals some of its well-kept secrets in two new studies in the journal Nature, thanks to data from NASA's Dawn spacecraft. They include highly anticipated insights about mysterious bright features found all over the dwarf planet's surface.

In one study, scientists identify this bright material as a kind of salt. The second study suggests the detection of ammonia-rich clays, raising questions about how Ceres formed.

Dwarf planet Ceres is shown in these false-color renderings, which highlight differences in surface materials. Images from NASA’s Dawn spacecraft were used to create a movie of Ceres rotating, followed by a flyover view of Occator Crater, home of Ceres’ brightest area.

About the Bright Spots

This representation of Ceres' Occator Crater in false colors shows differences in the surface composition. Ceres has more than 130 bright areas, and most of them are associated with impact craters. Study authors, led by Andreas Nathues at Max Planck Institute for Solar System Research, Göttingen, Germany, write that the bright material is consistent with a type of magnesium sulfate called hexahydrite. A different type of magnesium sulfate is familiar on Earth as Epsom salt.

Nathues and colleagues, using images from Dawn's framing camera, suggest that these salt-rich areas were left behind when water-ice sublimated in the past. Impacts from asteroids would have unearthed the mixture of ice and salt, they say.

An image of Occator Crater draped over a digital terrain model provides a 3-D-like perspective view of the impact structure. 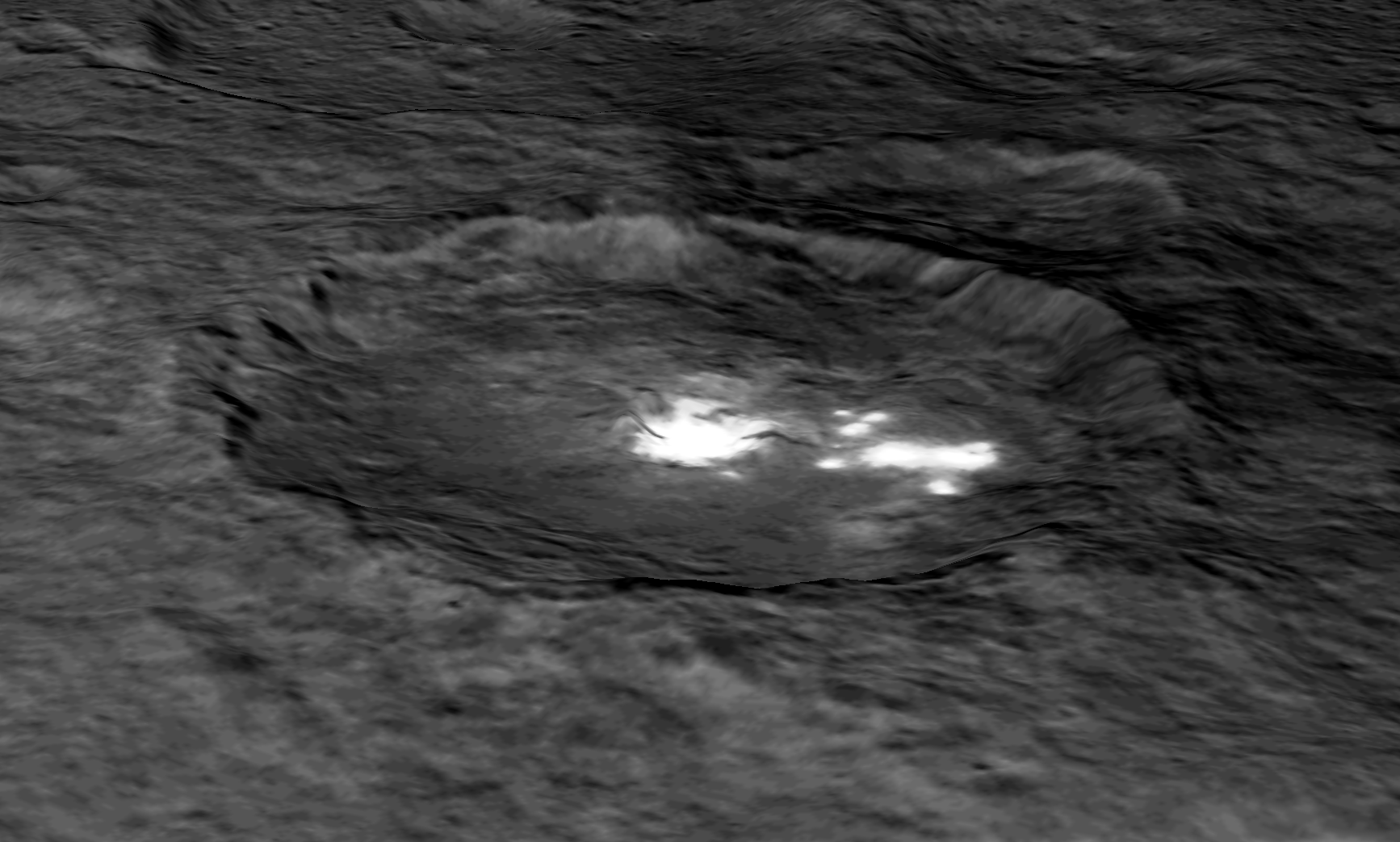 "The global nature of Ceres' bright spots suggests that this world has a subsurface layer that contains briny water-ice," Nathues said.

A New Look at Occator

The surface of Ceres, whose average diameter is 584 miles (940 kilometers), is generally dark -- similar in brightness to fresh asphalt -- study authors wrote. The bright patches that pepper the surface represent a large range of brightness, with the brightest areas reflecting about 50 percent of sunlight shining on the area. But there has not been unambiguous detection of water ice on Ceres; higher-resolution data are needed to settle this question.

A group of scientists from NASA's Dawn mission suggests that when sunlight reaches Ceres' Occator Crater, a kind of thin haze of dust and evaporating water forms there. With its sharp rim and walls, and abundant terraces and landslide deposits, Occator appears to be among the youngest features on Ceres. Dawn mission scientists estimate its age to be about 78 million years old.

Study authors write that some views of Occator appear to show a diffuse haze near the surface that fills the floor of the crater. This may be associated with observations of water vapor at Ceres by the Herschel space observatory that were reported in 2014. The haze seems to be present in views during noon, local time, and absent at dawn and dusk, study authors write. This suggests that the phenomenon resembles the activity at the surface of a comet, with water vapor lifting tiny particles of dust and residual ice. Future data and analysis may test this hypothesis and reveal clues about the process causing this activity.

Oxo Crater, which is about 6 miles (9 kilometers) in diameter, is the second-brightest feature on Ceres. 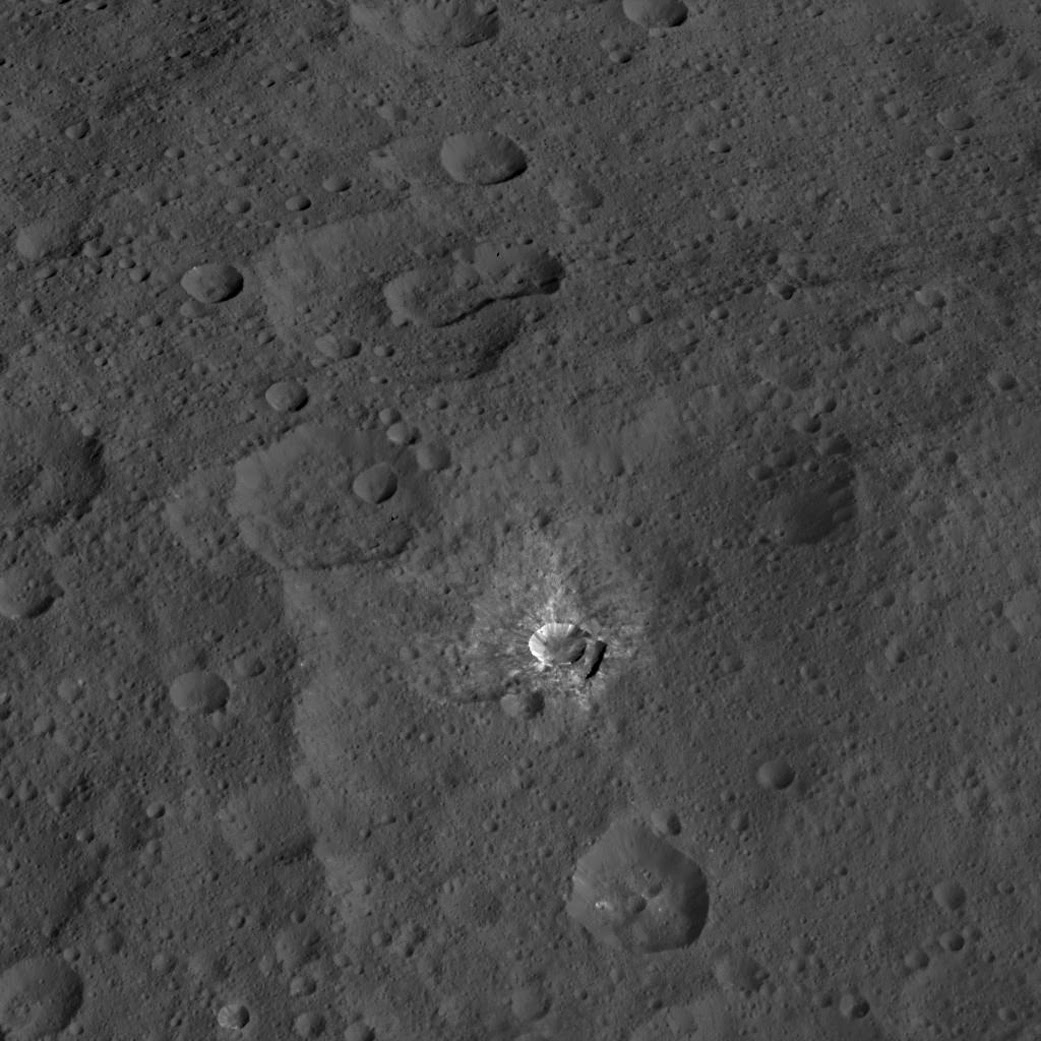 "The Dawn science team is still discussing these results and analyzing data to better understand what is happening at Occator," said Chris Russell, principal investigator of the Dawn mission, based at the University of California, Los Angeles.

The Importance of Ammonia

In the second Nature study, members of the Dawn science team examined the composition of Ceres and found evidence for ammonia-rich clays. They used data from the visible and infrared mapping spectrometer, a device that looks at how various wavelengths of light are reflected by the surface, allowing minerals to be identified.

Ammonia ice by itself would evaporate on Ceres today, because the dwarf planet is too warm. However, ammonia molecules could be stable if present in combination with (i.e. chemically bonded to) other minerals.

The presence of ammoniated compounds raises the possibility that Ceres did not originate in the main asteroid belt between Mars and Jupiter, where it currently resides, but instead might have formed in the outer solar system. Another idea is that Ceres formed close to its present position, incorporating materials that drifted in from the outer solar system – near the orbit of Neptune, where nitrogen ices are thermally stable.

"The presence of ammonia-bearing species suggests that Ceres is composed of material accreted in an environment where ammonia and nitrogen were abundant. Consequently, we think that this material originated in the outer cold solar system,” said Maria Cristina De Sanctis, lead author of the study, based at the National Institute of Astrophysics, Rome.

In comparing the spectrum of reflected light from Ceres to meteorites, scientists found some similarities. Specifically, they focused on the spectra, or chemical fingerprints, of carbonaceous chondrites, a type of carbon-rich meteorite thought to be relevant analogues for the dwarf planet. But these are not good matches for all wavelengths that the instrument sampled, the team found. In particular, there were distinctive absorption bands, matching mixtures containing ammoniated minerals, associated with wavelengths that can't be observed from Earth-based telescopes.

The scientists note another difference is that these carbonaceous chondrites have bulk water contents of 15 to 20 percent, while Ceres' content is as much as 30 percent.

"Ceres may have retained more volatiles than these meteorites, or it could have accreted the water from volatile-rich material," De Sanctis said.

The study also shows that daytime surface temperatures on Ceres span from minus 136 degrees to minus 28 degrees Fahrenheit (180 to 240 Kelvin). The maximum temperatures were measured in the equatorial region. The temperatures at and near the equator are generally too high to support ice at the surface for a long time, study authors say, but data from Dawn's next orbit will reveal more details.

As of this week, Dawn has reached its final orbital altitude at Ceres, about 240 miles (385 kilometers) from the surface of the dwarf planet. In mid-December, Dawn will begin taking observations from this orbit, including images at a resolution of 120 feet (35 meters) per pixel, infrared, gamma ray and neutron spectra, and high-resolution gravity data.