Hubble Sees The Force Awakening in a Newborn Star

Just in time for the release of the movie "Star Wars Episode VII: The Force Awakens," NASA's Hubble Space Telescope has photographed what looks like a cosmic, double-bladed lightsaber.

In the center of the image, partially obscured by a dark, Jedi-like cloak of dust, a newborn star shoots twin jets out into space as a sort of birth announcement to the universe.

"Science fiction has been an inspiration to generations of scientists and engineers, and the film series Star Wars is no exception," said John Grunsfeld, astronaut and associate administrator for the NASA Science Mission directorate. "There is no stronger case for the motivational power of real science than the discoveries that come from the Hubble Space Telescope as it unravels the mysteries of the universe."

This celestial lightsaber does not lie in a galaxy far, far away, but rather inside our home galaxy, the Milky Way. It's inside a turbulent birthing ground for new stars known as the Orion B molecular cloud complex, located 1,350 light-years away.

When stars form within giant clouds of cool molecular hydrogen, some of the surrounding material collapses under gravity to form a rotating, flattened disk encircling the newborn star.

This sequence combines a two-dimensional zoom and a three-dimensional flight to explore the Hubble Space Telescope's striking image of the Herbig-Haro object known as HH 24.

Though planets will later congeal in the disk, at this early stage the protostar is feeding on the disk with a Jabba-like appetite. Gas from the disk rains down onto the protostar and engorges it. Superheated material spills away and is shot outward from the star in opposite directions along an uncluttered escape route -- the star's rotation axis.

Shock fronts develop along the jets and heat the surrounding gas to thousands of degrees Fahrenheit. The jets collide with the surrounding gas and dust and clear vast spaces, like a stream of water plowing into a hill of sand. The shock fronts form tangled, knotted clumps of nebulosity and are collectively known as Herbig-Haro (HH) objects. The prominent HH object shown in this image is HH 24.

Just to the right of the cloaked star, a couple of bright points are young stars peeking through and showing off their own faint lightsabers -- including one that has bored a tunnel through the cloud towards the upper-right side of the picture.

This is an artist's concept of the fireworks that accompany the birth of a star. The young stellar object is encircled by a pancake-shaped disk of dust and gas left over from the collapse of the nebula that formed the star. Gas falls onto the newly forming star and is heated to the point that some of it escapes along the star's spin axis. Intertwined by magnetic fields, the bipolar jets blast into space at over 100,000 miles per hour. As seen from far away, they resemble a double-bladed lightsaber from the Star Wars film series. 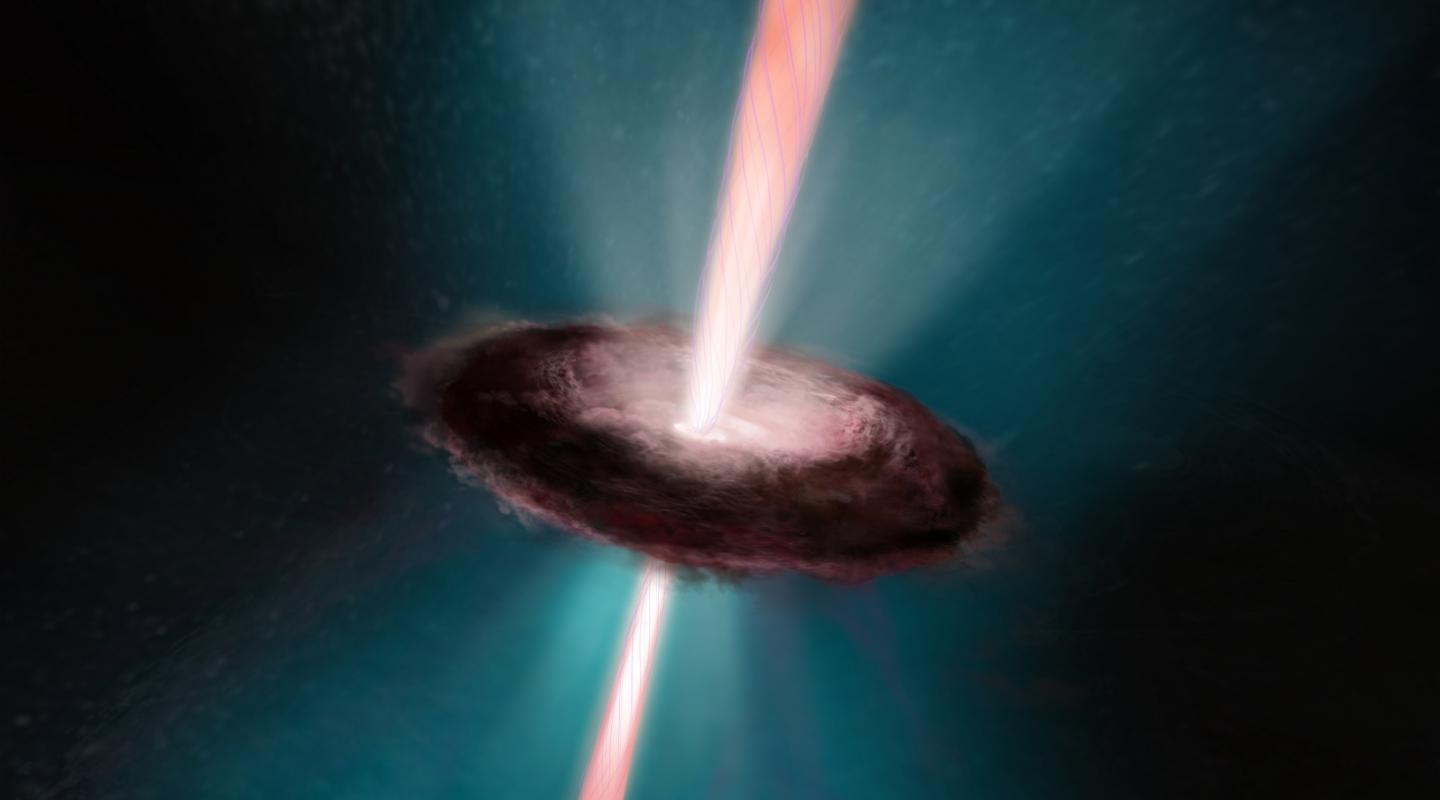 Overall, just a handful of HH jets have been spotted in this region in visible light, and about the same number in the infrared. Hubble's observations for this image were performed in infrared light, which enabled the telescope to peer through the gas and dust cocooning the newly forming stars and capture a clear view of the HH objects.

These young stellar jets are ideal targets for NASA's upcoming James Webb Space Telescope, which will have even greater infrared wavelength vision to see deeper into the dust surrounding newly forming stars.

The Hubble Space Telescope is a project of international cooperation between NASA and the European Space Agency. NASA's Goddard Space Flight Center in Greenbelt, Maryland, manages the telescope. The Space Telescope Science Institute (STScI) in Baltimore, Maryland, conducts Hubble science operations. STScI is operated for NASA by the Association of Universities for Research in Astronomy, in Washington, D.C.