Metastasizing cancer cells do not destroy tissue, but crawl along the paths that have already been created by blood vessels, nerve bundles and other tissues. However, immune cells that fight the cancer cells take those same paths. This was demonstrated in research conducted by cell biologist Bettina Weigelin of Radboud University medical center in Nijmegen, the Netherlands. Using a sophisticated microscope, she was the first to record on camera how metastasizing tumor cells move through the body and how immune cells hunt them down. She was also able to record the effect of different forms of immune therapy on cancer.

Figure 1: The collective invasion of tumor cells (yellow) into the skin of a mouse. The cells follow the path of the nerves and adipose tissue (blue), connective tissue and muscles (green), and blood vessels (red).

See also the video images at the Radboud University website.

Using a special microscope, i.e. a multiphoton laser scanning microscope*, Bettina Weigelin showed that the invasion of tumor cells into healthy tissue is not random. The cells crawl through cavities along blood vessels, between muscle tissues, or along nerve bundles. In fact, they choose the path of least resistance. This also means that the tumor does not damage the anatomy of the healthy tissue. Never before has this migration behavior of tumor cells been recorded with such clarity.

The battle front of the fight against cancer

In their pursuit of the tumor cells, immune cells also appear to choose the established pathways in the body. Using artificial connective tissue in the laboratory, Bettina Weigelin observed the interaction between tumor cells and a particular type of immune cells, so-called cytological T-lymphocytes (CTLs). She discovered that a repeated attack of CTLs is capable of killing immune-resistant cancer cells. She found this same effect in the living tissue of mice. The extent to which cancer cells were killed was the highest in regions where the concentration of CTLs was the highest.

Figure 2: T-cells (green) are hunting down tumor cells (red). Check out the video images on our website, which show the difference between a ‘normal’ treatment and combination therapy with monoclonal antibodies. 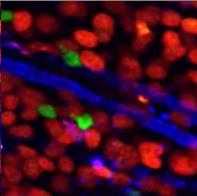 It is possible to boost the natural immune system against cancer with the help of immunotherapy. One way to do that is by extracting CTL cells from the patient’s body, multiplying them in the laboratory, and then to administer them again to the patient. This massive invasion of CTLs goes after the tumor cells that can no longer offer resistance to these superior numbers. The images made by Weigelin demonstrate that not only the number of active CTLs determines the success of the attack, but also the degree to which these immune cells can penetrate a tumor, and the longer life span they have subsequently.

A cocktail of therapies overcomes opposition

Even though therapy using reinforced CTLs is effective, tumor cells may still become resistant to this control method. Fortunately, there are more options. Another form of immunotherapy uses monoclonal antibodies. These are signal substances that adhere to the cancer cells, allowing the immune system to recognize these cells more readily and remove them more quickly. However, tumor cells may also resist this form of treatment. Bettina Weigelin discovered in experiments in mice that when both forms of immunotherapy are combined, tumor cells eventually succumb. In tumors that were treated with antibodies, the CTLs survived longer, were able to bind better to the tumor cells, and remained active longer in their attacks on tumor cells. This greatly improved the inhibition of tumor growth.

* A multiphoton laser scanning microscope fires (near-)infrared laser light at the tissues under observation. Molecules in the cells of this tissue light up under the laser light. Different cells contain different molecules, giving each cell type its own color. The images are made in living tissue, which makes it possible to not only make photos but also videos.