A long time ago in a galaxy half the universe away, a flood of high-energy gamma rays began its journey to Earth. When they arrived in April, NASA's Fermi Gamma-ray Space Telescope caught the outburst, which helped two ground-based gamma-ray observatories detect some of the highest-energy light ever seen from a galaxy so distant. The observations provide a surprising look into the environment near a supermassive black hole at the galaxy's center and offer a glimpse into the state of the cosmos 7 billion years ago.

Explore how gamma-ray telescopes in space and on Earth captured an outburst of high-energy light from PKS 1441+25, a black-hole-powered galaxy more than halfway across the universe.

"When we looked at all the data from this event, from gamma rays to radio, we realized the measurements told us something we didn't expect about how the black hole produced this energy," said Jonathan Biteau at the Nuclear Physics Institute of Orsay, France. He led the study of results from the Very Energetic Radiation Imaging Telescope Array System (VERITAS), a gamma-ray telescope in Arizona.

"Instead, the multiwavelength picture suggests that light at all wavelengths came from a single region located far away from the power source," Biteau explained. The observations place the area roughly five light-years from the black hole, which is greater than the distance between our sun and the nearest star.

The gamma rays came from a galaxy known as PKS 1441+25, a type of active galaxy called a blazar. Located toward the constellation Boötes, the galaxy is so far away its light takes 7.6 billion years to reach us. At its heart lies a monster black hole with a mass estimated at 70 million times the sun's and a surrounding disk of hot gas and dust. If placed at the center of our solar system, the black hole's event horizon -- the point beyond which nothing can escape -- would extend almost to the orbit of Mars.

As material in the disk falls toward the black hole, some of it forms dual particle jets that blast out of the disk in opposite directions at nearly the speed of light. Blazars are so bright in gamma rays because one jet points almost directly toward us, giving astronomers a view straight into the black hole's dynamic and poorly understood realm.

Black-hole-powered galaxies called blazars are the most common sources detected by NASA's Fermi Gamma-ray Space Telescope. As matter falls toward the supermassive black hole at the galaxy's center, some of it is accelerated outward at nearly the speed of light along jets pointed in opposite directions. When one of the jets happens to be aimed in the direction of Earth, as illustrated here, the galaxy appears especially bright and is classified as a blazar. 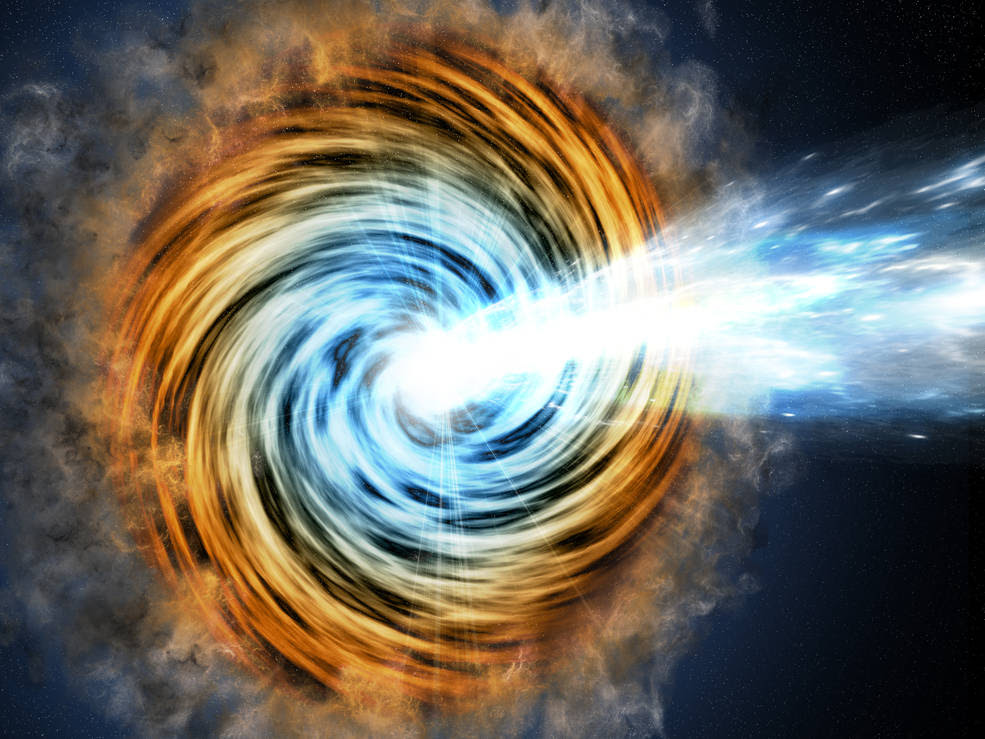 In April, PKS 1441+25 underwent a major eruption. Luigi Pacciani at the Italian National Institute for Astrophysics in Rome was leading a project to catch blazar flares in their earliest stages in collaboration with the Major Atmospheric Gamma-ray Imaging Cerenkov experiment (MAGIC), located on La Palma in the Canary Islands. Using public Fermi data, Pacciani discovered the outburst and immediately alerted the astronomical community. Fermi's Large Area Telescope revealed gamma rays up to 33 billion electron volts (GeV), reaching into the highest-energy part of the instrument's detection range. For comparison, visible light has energies between about 2 and 3 electron volts.

"Detecting these very energetic gamma rays with Fermi, as well as seeing flaring at optical and X-ray energies with NASA's Swift satellite, made it clear that PKS 1441+25 had become a good target for MAGIC," Pacciani said.

Following up on the Fermi alert, the MAGIC team turned to the blazar and detected gamma rays with energies ranging from 40 to 250 GeV. "Because this galaxy is so far away, we didn't have a strong expectation of detecting gamma rays with energies this high," said Josefa Becerra Gonzalez, a researcher at NASA's Goddard Space Flight Center in Greenbelt, Maryland, who analyzed Fermi LAT data as part of the MAGIC study. "There are fewer and fewer gamma rays at progressively higher energies, and fewer still from very distant sources."

The reason distance matters for gamma rays is that they convert into particles when they collide with lower-energy light. The visible and ultraviolet light from stars shining throughout the history of the universe forms a remnant glow called the extragalactic background light (EBL). For gamma rays, this is a cosmic gauntlet they must pass through to be detected at Earth. When a gamma ray encounters starlight, it transforms into an electron and a positron and is lost to astronomers. The farther away the blazar is, the less likely its highest-energy gamma rays will survive to be detected.

More distant blazars show a loss of higher-energy gamma rays thanks to the extragalactic background light (EBL), a "cosmic fog" of visible and ultraviolet starlight that permeates the universe. From studies of nearby blazars, scientists know how many gamma rays should be emitted at different energies. If a gamma ray on its way to Earth collides with lower-energy light in the EBL, it converts into a pair of particles and is lost to astronomers. As shown by the graphs at left in this illustration, the more distant the blazar, the fewer high-energy gamma rays we can detect. During the April 2015 outburst of PKS 1441+25, MAGIC and VERITAS saw rare gamma rays exceeding 100 GeV that managed to survive a journey of 7.6 billion light-years. 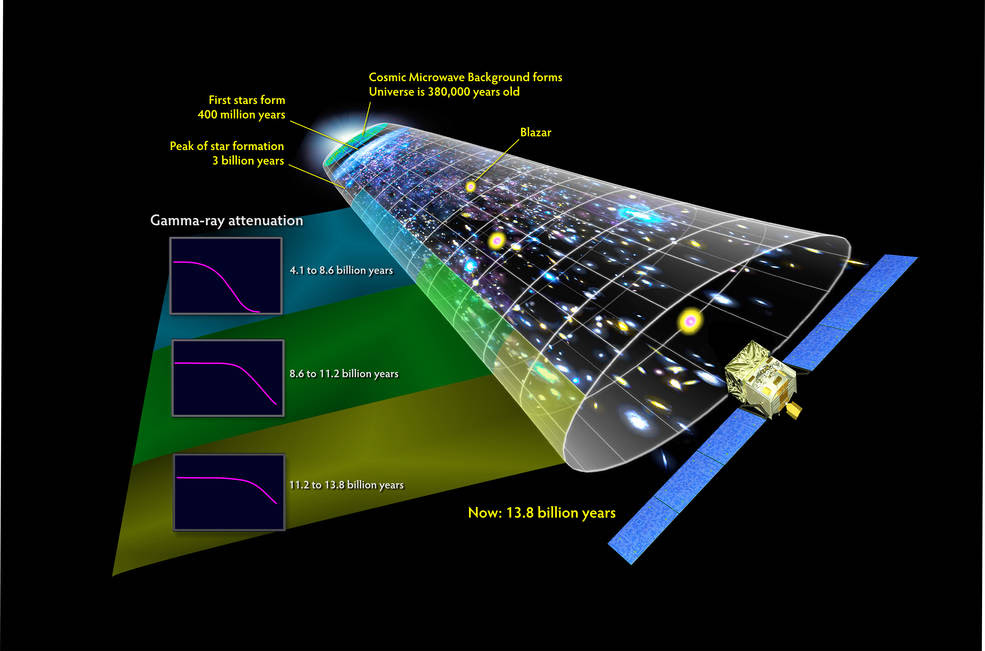 PKS 1441+25 is one of only two such distant sources for which gamma rays with energies above 100 GeV have been observed. Its dramatic flare provides a powerful glimpse into the intensity of the EBL from near-infrared to near-ultraviolet wavelengths and suggests that galaxy surveys have identified most of the sources responsible for it.