Engineers have successfully married electrons and photons within a single-chip microprocessor, a landmark development that opens the door to ultrafast, low-power data crunching.

The researchers packed two processor cores with more than 70 million transistors and 850 photonic components onto a 3-by-6-millimeter chip. They fabricated the microprocessor in a foundry that mass-produces high-performance computer chips, proving that their design can be easily and quickly scaled up for commercial production.

This packaged electronic-photonic processor microchip under illumination reveals the chip's primary features. The light rays emanating from the chip are drawn to show that the processor talks to the outside world using light. 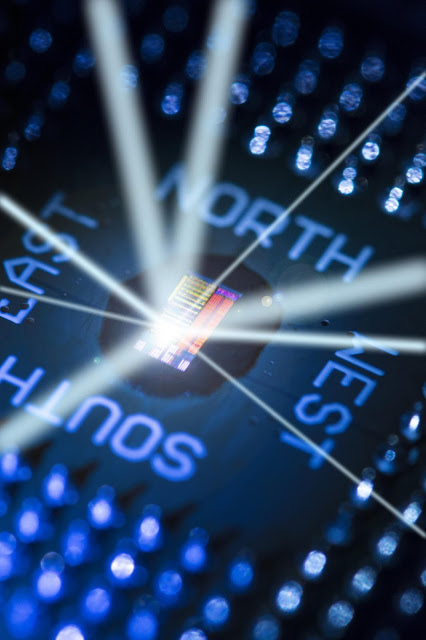 The new chip, described in a paper to be published Dec. 24 in the print issue of the journal Nature, marks the next step in the evolution of fiber optic communication technology by integrating into a microprocessor the photonic interconnects, or inputs and outputs (I/O), needed to talk to other chips.


"This is a milestone. It's the first processor that can use light to communicate with the external world," said Vladimir Stojanović, an associate professor of electrical engineering and computer sciences at the University of California, Berkeley, who led the development of the chip. "No other processor has the photonic I/O in the chip."

Stojanović and fellow UC Berkeley professor Krste Asanović teamed up with Rajeev Ram at the Massachusetts Institute of Technology and Milos Popović at the University of Colorado, Boulder, to develop the new microprocessor.

"This is the first time we've put a system together at such scale, and have it actually do something useful, like run a program," said Asanović, who helped develop the free and open architecture called RISC-V (reduced instruction set computer), used by the processor.

This is a raw, high-resolution photo of the chip, with all chip electrical and photonic features clearly visible. Photo taken under microscope at the UC Berkeley Marvell Nanofabrication Laboratory. 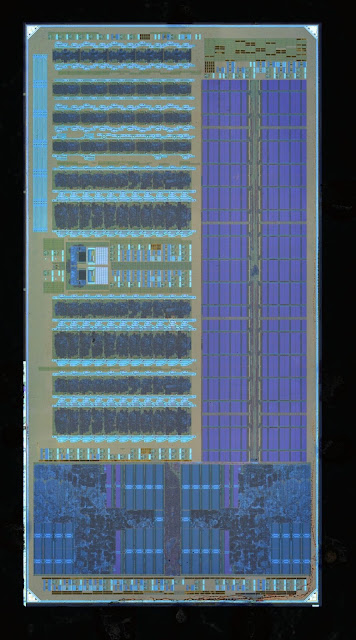 Image by Chen Sun, sunchen@eecs.berkeley.edu, with help from Sangyoon Han

That's because no one until now had figured out how to integrate photonic devices into the same complex and expensive fabrication processes used to produce computer chips without changing the process itself. Doing so is key since it does not further increase the cost of the manufacturing or risk failure of the fabricated transistors.

The researchers verified the functionality of the chip with the photonic interconnects by using it to run various computer programs, requiring it to send and receive instructions and data to and from memory. They showed that the chip had a bandwidth density of 300 gigabits per second per square millimeter, about 10 to 50 times greater than packaged electrical-only microprocessors currently on the market.

The photonic I/O on the chip is also energy-efficient, using only 1.3 picojoules per bit, equivalent to consuming 1.3 watts of power to transmit a terabit of data per second. In the experiments, the data was sent to a receiver 10 meters away and back.

The electronic-photonic processor chip communicates to the outside world directly using light. This photo shows the chip naturally illuminated by red and green bands of light. 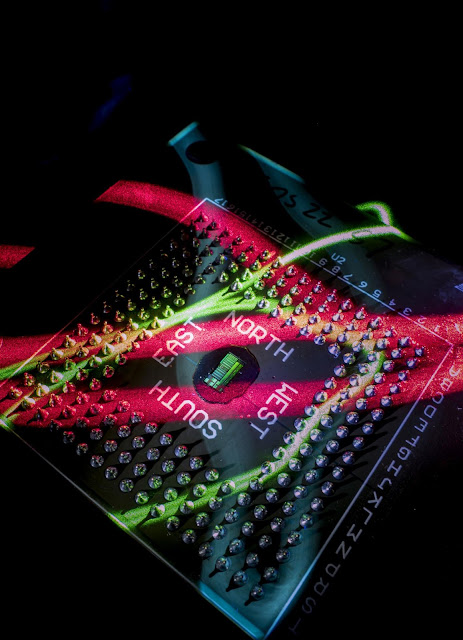 "The advantage with optical is that with the same amount of power, you can go a few centimeters, a few meters or a few kilometers," said study co-lead author Chen Sun, a recent UC Berkeley Ph.D. graduate from Stojanović's lab at the Berkeley Wireless Research Center. "For high-speed electrical links, 1 meter is about the limit before you need repeaters to regenerate the electrical signal, and that quickly increases the amount of power needed. For an electrical signal to travel 1 kilometer, you'd need thousands of picojoules for each bit."

The achievement opens the door to a new era of bandwidth-hungry applications. One near-term application for this technology is to make data centers more green. According to the Natural Resources Defense Council, data centers consumed about 91 billion kilowatt-hours of electricity in 2013, about 2 percent of the total electricity consumed in the United States, and the appetite for power is growing exponentially.

This research has already spun off two startups this year with applications in data centers in mind. SiFive is commercializing the RISC-V processors, while Ayar Labs is focusing on photonic interconnects. Earlier this year, Ayar Labs - under its previous company name of OptiBit - was awarded the MIT Clean Energy Prize. Ayar Labs is getting further traction through the CITRIS Foundry startup incubator at UC Berkeley.

The advance is timely, coming as world leaders emerge from the COP21 United Nations climate talks with new pledges to limit global warming.

Further down the road, this research could be used in applications such as LIDAR, the light radar technology used to guide self-driving vehicles and the eyes of a robot; brain ultrasound imaging; and new environmental biosensors.

'Fiat lux' on a chip

The researchers came up with a number of key innovations to harness the power of light within the chip.

Each of the key photonic I/O components - such as a ring modulator, photodetector and a vertical grating coupler - serves to control and guide the light waves on the chip, but the design had to conform to the constraints of a process originally thought to be hostile to photonic components. To enable light to move through the chip with minimal loss, for instance, the researchers used the silicon body of the transistor as a waveguide for the light. They did this by using available masks in the fabrication process to manipulate doping, the process used to form different parts of transistors.

After getting the light onto the chip, the researchers needed to find a way to control it so that it can carry bits of data. They designed a silicon ring with p-n doped junction spokes next to the silicon waveguide to enable fast and low-energy modulation of light.

Using the silicon-germanium parts of a modern transistor - an existing part of the semiconductor manufacturing process - to build a photodetector took advantage of germanium's ability to absorb light and convert it into electricity.

A vertical grating coupler that leverages existing poly-silicon and silicon layers in innovative ways was used to connect the chip to the external world, directing the light in the waveguide up and off the chip. The researchers integrated electronic components tightly with these photonic devices to enable stable operation in a hostile chip environment.

The authors emphasized that these adaptations all worked within the parameters of existing microprocessor manufacturing systems, and that it will not be difficult to optimize the components to further improve their chip's performance.