A long time ago in a galaxy far, far away…​

The Rebel Alliance blew up two of their sworn enemy’s space stations, defeated their leader Emperor Palpatine, and dissolved his government. The fictional Galactic Empire, brought to life by the beloved Star Wars movie franchise, was in ruins after the Battle of Endor, at the end of “Episode VI: Return of the Jedi.”

And as it turns out, the financial state of the Galaxy was in serious trouble as well.

Even “catastrophic,” concludes Zachary Feinstein, PhD, assistant professor of electrical and systems engineering in the School of Engineering & Applied Science at Washington University in St. Louis.

Feinstein discusses the economics of a galaxy far, far away.
Video by Clark Bowen/WUSTL Video Services.

In a case study titled “It’s a Trap: Emperor Palpatine’s Poison Pill​,” Feinstein assesses the condition of the Galactic economy following the Empire’s collapse, and applies economic modeling and systemic risk analysis to the Star Wars economy. He even establishes the Gross Galactic Product, similar to a more traditional GDP.

The bottom line: The Rebel Alliance would have to bail out the Imperial banking sector to prevent a devastating economic collapse.

“This project was really about modeling the size of the Galactic economy and banking sector,” Feinstein said. “Once I had that, I simply applied my research on measuring financial systemic risk to determine the required bailout.”

First, Feinstein modeled the galactic economy by estimating the price of both Death Stars, using the most recently completed aircraft carrier in the American fleet as a measuring stick.

Comparing the price ($17.5 billion) and size (100,000 metric tons of steel) of the USS Gerald Ford with an estimated size of both Death Stars, the price tag for the Empire was astounding: $193 quintillion for the first version; $419 quintillion for the second, though manageable in comparison to the $4.6 sextillion Galactic economy.

Darth Vader and the Empire faced a dire economic future after the Battle of Endor, says the School of Engineering’s Zachary Feinstein. 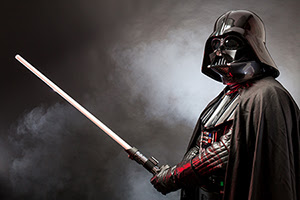 In the movies, both Death Stars are destroyed within a four-year time span, which would have been a staggering economic blow to the Imperial financial sector. To prevent a total financial collapse would require a bailout of at least 15 percent, and likely greater than 20 percent, of the entire economy’s resources.

“The most surprising result was how large the economic collapse could be,” Feinstein said. “Without a bailout, there was a non-negligible chance of over 30 percent drop in the size of the Galactic economy overnight — larger than the losses from the Great Depression over 4 years (from peak to trough).

“The outlook appears very grim for the common Imperial citizen,” he said. “I think it is unlikely the Rebel Alliance could have found the political will and financial resources to provide the necessary banking bailout until it is too late.

“It may be that the Force is awakening 30 years after the events of Episode VI because of the economic forces at play,” Feinstein said.

What remains to be seen: If economic vitality is restored in time for the new chapter of the Star Wars saga. “Star Wars: The Force Awakens” opens nationwide in theaters Dec. 18.

Contacts and sources:
By Erika Ebsworth-Goold
Washington University in St. Louis
on December 08, 2015