An international research team, led by Rodrigo Lacruz, PhD, assistant professor in the Department of Basic Science and Craniofacial Biology at New York University’s College of Dentistry (NYUCD), has just published a study describing for the first time the developmental processes that differentiate Neanderthal facial skeletons from those of modern humans.

Lacruz’s research team showed that the Neanderthals, who appeared about 200,000 years ago, are quite distinct from Homo sapiens (humans) in the manner in which their faces grow, adding to an old but important debate concerning the separation of these two groups. The paper, “Ontogeny of the Maxilla in Neanderthals and their Ancestors,” appears in Nature Communications.

Image of skulls: Growth directions of the maxilla in the Sima de los Huesos (SH) and Neanderthals compared to modern humans. This impacts facial growth in at least two ways. (i) Extensive bone deposits over the maxilla in the fossils are consistent with a strong forward growth component (purple arrows); whereas resorption in the modern human face attenuates forward displacement (blue arrow). (ii) Deposition combined with larger developing nasal cavities in the fossils displaces the dentition forward generating the retromolar space characteristic of Neanderthals and also in some SH fossils.

“This is an important piece of the puzzle of evolution,” says Lacruz, a paleoanthropologist and enamel biologist. “Some have thought that Neanderthals and humans should not be considered distinct branches of the human family tree. However, our findings, based upon facial growth patterns, indicate they are indeed sufficiently distinct from one another.

In conducting the research, the team set out to understand the morphological processes that distinguish Neanderthals’ faces from modern humans’—a potentially important factor in understanding the process of evolution from archaic to modern humans.

Bone is formed through a process of bone deposition by osteoblasts (bone-forming cells) and resorption by osteoclast (bone-absorbing) cells, which break down bone. In humans, the outermost layer of bone in the face consists of large resorptive fields, but in Neanderthals, the opposite is true: In the outermost layer of bone, there is extensive bone deposition.

The team used an electron microscope and a portable confocal microscope, developed by co-author Dr. Timothy Bromage of NYUCD’s Department of Biomaterials, himself a pioneer in the study of facial growth remodeling in fossil hominins, to map for the first time the bone-cell growth processes (resorption and deposition) that had taken place in the outer layer of the facial skeletons of young Neanderthals. 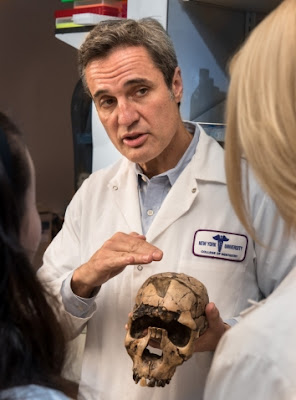 “Cellular processes relating to growth are preserved on the bones,” says Bromage. “Resorption can be seen as crater-like structures—called lacunae—on the bone surface, whereas layers of osteoblast deposits have a relatively smooth appearance.”

The study found that in Neanderthals, facial bone-growth remodeling—the process by which bone is deposited and reabsorbed, forming and shaping the adult skeleton—contributed to the development of a projecting (prognathic) maxilla (upper jawbone) because of extensive deposits by osteoblasts without a compensatory resorption—a process they shared with ancient hominins. This process is in stark contrast to that in human children, whose faces grow with a counter-balance action mediated by resorption taking place especially in the lower part of the face, leading to a flatter jaw relative to Neanderthals.

The team studied several well-preserved Neanderthal child skulls unearthed in 1926 in the British territory of Gibraltar and from the La Quina site in southwestern France, also excavated in the early 1900s. They also compared Neanderthal facial-growth remodeling with that of four Middle Pleistocene (about 400,000 years ago) hominin faces of teenagers from the fossil collection of the Sima de los Huesos in north-central Spain. The Sima fossils are considered likely Neanderthal ancestors based on both anatomical features and genomic DNA analysis.

Image of bone remodeling: Scanning electron microscope images showing details of bone microanatomy. Scale bars, 100 mm. (a) Bone-forming surfaces are relatively smooth, presenting collagen deposits by osteoblast cells. Image taken on the maxillary bone of the Devil’s Tower Neanderthal. (b) Resorption is identified as irregular surfaces carved by osteoclasts on the bone surface as they dissolve and remove bone matrix. Image taken from the maxillary bone of the SH hominin Cranium 16.

“We always considered Neanderthals to be a very different category of hominin,” said Lacruz. “But in fact they share with older African hominins a similar facial growth pattern. It’s actually humans who are developmentally derived, meaning that humans deviated from the ancestral pattern. In that sense, the face that is unique is the modern human face, and the next phase of research is to identify how and when modern humans acquired their facial-growth development plan.”

Moreover, Lacruz says, understanding the process of facial ontogeny can help explain the variation in facial size and shape among modern humans.


Project funded by NIH/NIDCR (DE022799) to RSL and Leakey Foundation to RSL. Research support was also provided by the 2010 Max Planck Research Award to TGB, endowed by the German Federal Ministry of Education and Research to the Max Planck Society and the Alexander von Humboldt Foundation in respect of the Hard Tissue Research Program in Human Paleobiomics.. CS’s research is supported by the Calleva Foundation and the Human Origins Research Fund. This article has been also sponsored by the Dirección General de Investigación of the Spanish Ministry of “Economía y Competitividad”, Grant numbers CGL2012-38434-C01-02- 03, the “Consejería de Cultura y Turismo of the Junta de Castilla y León”, and the “Fundación Atapuerca”. A. G-T has a contract from the Ramón y Cajal Program (RYC-2010-06152).