In 2013, Chang'e-3, an unmanned lunar mission, touched down on the northern part of the Imbrium basin, one of the most prominent of the lava-filled impact basins visible from Earth. The rover found volcanic rocks unlike those returned by Apollo and Luna missions, tantalizing clues to the period of lunar volcanism

It was a beautiful landing site, said Bradley L. Jolliff, PhD, the Scott Rudolph Professor of Earth and Planetary Sciences at Washington University in St. Louis, who is a participant in an educational collaboration that helped analyze Chang'e-3 mission data. The lander touched down on a smooth flood basalt plain next to a relatively fresh impact crater (now officially named the Zi Wei crater) that had conveniently excavated bedrock from below the regolith for the Yutu rover to study.

Four views of the Mare Imbrium basin and the Chang'e-3 landing site demonstrate how different the Moon looks to different types of remote sensing, underscoring the need for ground truth to calibrate the orbital observations. 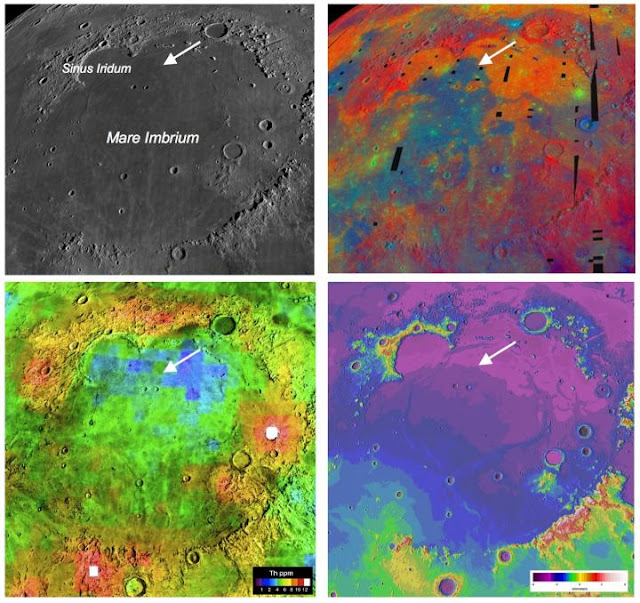 
Since the Apollo program ended, American lunar exploration has been conducted mainly from orbit. But orbital sensors primarily detect the regolith (the ground-up surface layer of fragmented rock) that blankets the Moon, and the regolith is typically mixed and difficult to interpret.

Because Chang'e-3 landed on a comparatively young lava flow, the regolith layer was thin and not mixed with debris from elsewhere. Thus it closely resembled the composition of the underlying volcanic bedrock. This characteristic made the landing site an ideal location to compare in situ analysis with compositional information detected by orbiting satellites.

"We now have 'ground truth' for our remote sensing, a well-characterized sample in a key location," Jolliff said. "We see the same signal from orbit in other places, so we now know that those other places probably have similar basalts."

The basalts at the Chang'e-3 landing site also turned out to be unlike any returned by the Apollo and Luna sample return missions.

"The diversity tells us that the Moon's upper mantle is much less uniform in composition than Earth's," Jolliff said. "And correlating chemistry with age, we can see how the Moon's volcanism changed over time."

Two partnerships were involved in the collection and analysis of this data, published in the journal Nature Communications Dec. 22. Scientists from a number of Chinese institutions involved with the Chang'e-3 mission formed one partnership; the other was a long-standing educational partnership between Shandong University in Weihai, China, and Washington University in St. Louis.

The Moon, thought to have been created by the collision of a Mars-sized body with the Earth, began as a molten or partially molten body that separated as it cooled into a crust, mantle and core. But the buildup of heat from the decay of radioactive elements in the interior then remelted parts of the mantle, which began to erupt onto the surface some 500 million years after the Moon's formation, pooling in impact craters and basins to form the maria, most of which are on the side of the Moon facing the Earth.

Chang'e-3 landing site is indicated with a white square in this lunar map, a mosaic made with the Lunar Reconnaissance Orbiter's Wide Angle Camera. The landing sites of the Apollo missions are in red. 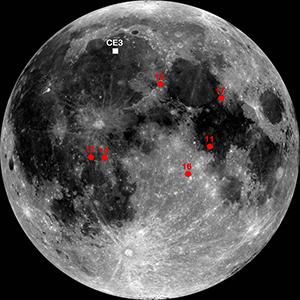 The American Apollo (1969-1972) and Russian Luna (1970-1976) missions sampled basalts from the period of peak volcanism that occurred between 3 and 4 billion years ago. But the Imbrium basin, where Chang'e-3 landed, contains some of the younger flows -- 3 billion years old or slightly less.

The basalts returned by the Apollo and Luna missions had either a high titanium content or low to very low titanium; intermediate values were missing. But measurements made by an alpha-particle X-ray spectrometer and a near-infrared hyperspectral imager aboard the Yutu rover indicated that the basalts at the Chang'e-3 landing site are intermediate in titanium, as well as rich in iron, said Zongcheng Ling, PhD, associate professor in the School of Space Science and Physics at Shandong University in Weihai, and first author of the paper.

Titanium is especially useful in mapping and understanding volcanism on the Moon because it varies so much in concentration, from less than 1 weight percent TiO2 to over15 percent. This variation reflects significant differences in the mantle source regions that derive from the time when the early magma ocean first solidified.

Minerals crystallize from basaltic magma in a certain order, explained Alian Wang, PhD, research professor in earth and planetary sciences in Arts & Sciences at Washington University. Typically, the first to crystallize are two magnesium- and iron-rich minerals (olivine and pyroxene) that are both a little denser than the magma, and sink down through it, then a mineral (plagioclase feldspar), that is less dense and floats to the surface. This process of separation by crystallization led to the formation of the Moon's mantle and crust as the magma ocean cooled.

The titanium ended up in a mineral called ilmenite (FeTiO3) that typically doesn't crystallize until a very late stage, when perhaps only 5 percent of the original melt remains. When it finally crystallized, the ilmenite-rich material, which is also dense, sank into the mantle, forming areas of Ti enrichment.

"The variable titanium distribution on the lunar surface suggests that the Moon's interior was not homogenized," Jolliff said. "We're still trying to figure out exactly how this happened. Possibly there were big impacts during the magma ocean stage that disrupted the mantle's formation."

Another clue to the Moon's past

The story has another twist that also underscores the importance of checking orbital data against ground truth. The remote sensing data for Chang'e-3's landing site showed that it was rich in olivine as well as titanium.

The Chinese lunar rover, Yutu, photographed by its lander Chang'e-3, after the lander touched down in Mare Imbrium, a giant impact basin that had been filled by successive lava flows. 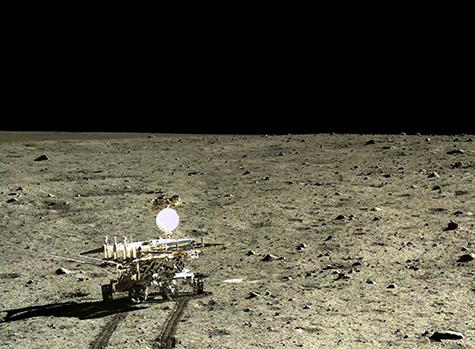 That doesn't make sense, Wang said, because olivine usually crystallizes early and the titanium-rich ilmenite crystallizes late. Finding a rock that is rich in both is a bit strange.

But Yutu solved this mystery as well. In olivine, silicon is paired with either magnesium or iron but the ratio of those two elements is quite variable in different forms of the mineral. The early-forming olivine would be magnesium rich, while the olivine detected by Yutu has a composition that ranges from intermediate in iron to iron-rich.

"That makes more sense," Jolliff said, "because iron-enriched olivine and ilmenite are more likely to occur together.

"You still have to explain how you get to an olivine-rich and ilmenite-rich rock. One way to do that would be to mix, or hybridize, two different sources," he said.

The scientists infer that late in the magma-ocean crystallization, iron-rich pyroxene and ilmenite, which formed late and at the crust-mantle boundary, might have begun to sink. and early-formed magnesium-rich olivine might have begun to rise. As this occurred, the two minerals might have mixed and hybridized.

"Given these data, that is our interpretation," Jolliff said.

In any case, it is clear that these newly characterized basalts reveal a more diverse Moon than the one that emerged from studies following the Apollo and Luna missions. Remote sensing suggests that there are even younger and even more diverse basalts on the Moon, waiting for future robotic or human explorers to investigate, Jolliff said.