The NASA/ESA Hubble Space Telescope has captured the image of the first-ever predicted supernova explosion. The reappearance of the Refsdal supernova was calculated from different models of the galaxy cluster whose immense gravity is warping the supernova’s light.

Many stars end their lives with a with a bang, but only a few of these stellar explosions have been caught in the act. When they are, spotting them successfully has been down to pure luck — until now. On 11 December 2015 astronomers not only imaged a supernova in action, but saw it when and where they had predicted it would be.

This image composite shows the search for the supernova, nicknamed Refsdal, using the NASA/ESA Hubble Space Telescope. The image to the left shows a part of the the deep field observation of the galaxy cluster MACS J1149.5+2223 from the Frontier Fields programme. The circle indicates the predicted position of the newest appearance of the supernova. To the lower right the Einstein cross event from late 2014 is visible. 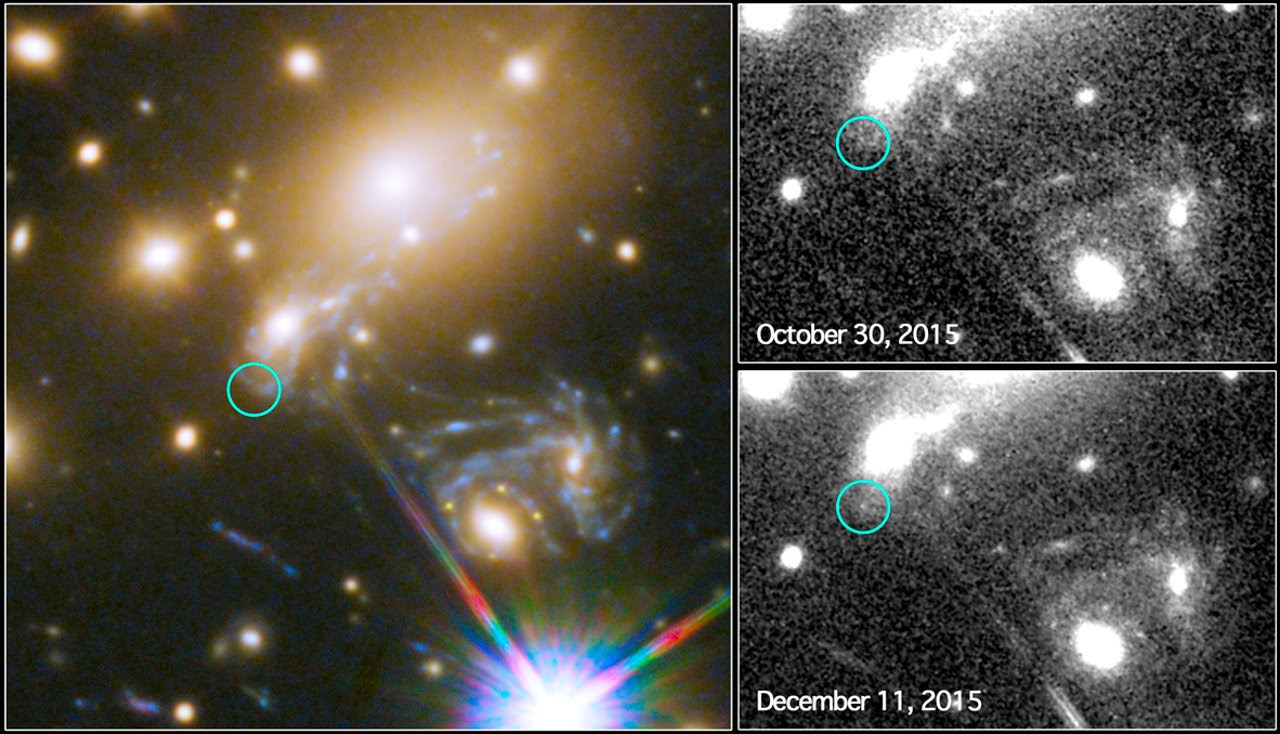 The supernova, nicknamed Refsdal [1], has been spotted in the galaxy cluster MACS J1149.5+2223. While the light from the cluster has taken about five billion years to reach us, the supernova itself exploded much earlier, nearly 10 billion years ago [2].

Refsdal’s story began in November 2014 when scientists spotted four separate images of the supernova in a rare arrangement known as an Einstein Cross around a galaxy within MACS J1149.5+2223 (heic1505) [3]. The cosmic optical illusion was due to the mass of a single galaxy within the cluster warping and magnifying the light from the distant stellar explosion in a process known as gravitational lensing [4].

This video shows the three appearances of the Refsdal supernova in the galaxy cluster MACS J1149.5+2223. Calculations showed that the first image of the supernova appeared in 1998 — an event not observed with a telescope. The second image produced an almost perfect Einstein Cross, which was observed in November 2014 (heic1505). The latest appearance was observed by the NASA/ESA Hubble Space telescope on 11 December 2015, as correctly predicted by seven different models.

The positions of all three events are highlighted in this video with animated supernovae, even though the Einstein Cross event is also visible in the original image.

"While studying the supernova, we realised that the galaxy in which it exploded is already known to be a galaxy that is being lensed by the cluster,” explains Steve Rodney, co-author, from the University of South Carolina. “The supernova's host galaxy appears to us in at least three distinct images caused by the warping mass of the galaxy cluster.”

These multiple images of the galaxy presented a rare opportunity. As the matter in the cluster — both dark and visible — is distributed unevenly, the light creating each of these images takes a different path with a different length. Therefore the images of the host galaxy of the supernova are visible at different times.

Using other lensed galaxies within the cluster and combining them with the discovery of the Einstein Cross event in 2014, astronomers were able to make precise predictions for the reappearance of the supernova. Their calculations also indicated that the supernova appeared once before in a third image of the host galaxy in 1998 — an event not observed by any telescope. To make these predictions they had to use some very sophisticated modelling techniques. 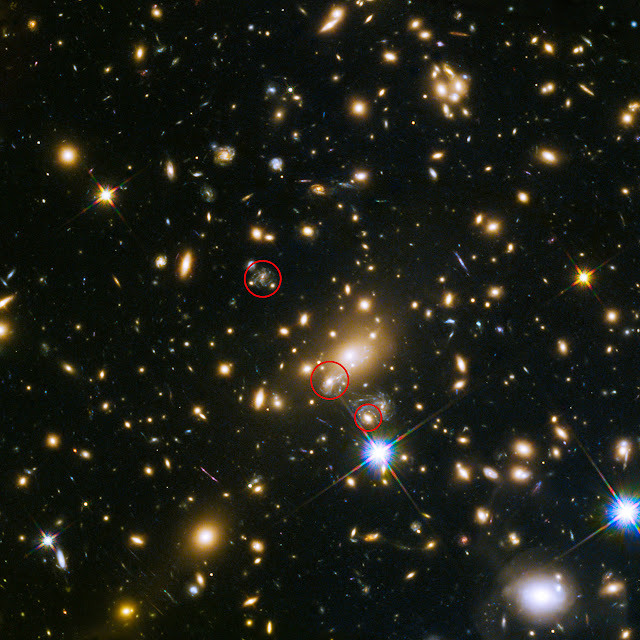 “We used seven different models of the cluster to calculate when and where the supernova was going to appear in the future. It was a huge effort from the community to gather the necessary input data using Hubble, VLT-MUSE, and Keck and to construct the lens models,” explains Tommaso Treu, lead author of the modelling comparison paper, from the University of California at Los Angeles, USA. “And remarkably all seven models predicted approximately the same time frame for when the new image of the exploding star would appear”.

This illustration shows how the different images of the Refsdal supernova were created by the huge galaxy clusterMACS J1149.5+2223 in front of it. The light of the Supernova has been magnified and distorted due togravitational lensing. This effect made the supernova and its host galaxy visible at three different locations. One of these images was again lensed by an elliptical galaxy within the galaxy cluster, which led to the creation of a formation known as an Einstein cross. This was observed in late 2014. 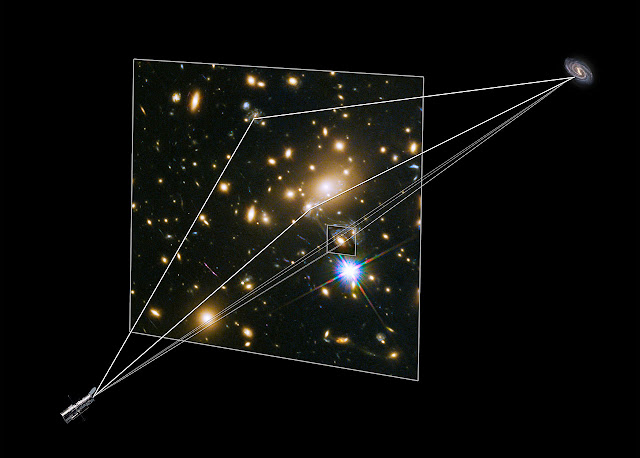 Since the end of October 2015 Hubble has been periodically peering at MACS J1149.5+2223, hoping to observe the unique rerun of the distant explosion and prove the models correct. On 11 December Refsdal finally made its predicted, but nonetheless showstopping, reappearance.

“Hubble has showcased the modern scientific method at its best,” comments Patrick Kelly, lead author of the discovery and re-appearance papers and co-author of the modelling comparison paper from the University of California Berkeley, USA. “Testing predictions through observations provides powerful means of improving our understanding of the cosmos.”

The detection of Refsdal’s reappearance served as a unique opportunity for astronomers to test their models of how mass — especially that of mysterious dark matter — is distributed within this galaxy cluster. Astronomers are now eager to see what other surprises the ongoing Hubble Frontier Fields programme will bring to light.
Notes

[1] The supernova has been nicknamed Refsdal in honour of the Norwegian astronomer Sjur Refsdal, who, in 1964, first proposed using time-delayed images from a lensed supernova to study the expansion of the Universe.

[2] The W. M. Keck Observatory on Mauna Kea, in Hawaii, was used to measure the redshift of the supernova’s host galaxy (z = 1.491), which is a proxy to its distance.

[3] Hubble observed MACS J1149.5+2223 as part of the Grism Lens Amplified Survey from Space (GLASS) and the Frontier Fields programme. Both surveys are exploiting the lensing properties of galaxy clusters to examine the dark matter within them and some of the most distant galaxies beyond them.

[4] Gravitational lensing magnifies the light from fainter, background objects, allowing Hubble to spy galaxies it would otherwise not be able to detect. The process was first predicted by Albert Einstein and is now being exploited by the Frontier Fields programme in order to find some of the most distant galaxies in the Universe.
More information