Long before kangaroos carried their joeys in their pouches and honey bees nurtured their young in hives, there was the 508-million-year-old Waptia. Little is known about the shrimp-like creature first discovered in the renowned Canadian Burgess Shale fossil deposit a century ago, but recent analysis by scientists from the University of Toronto, Royal Ontario Museum, and Centre national de la recherche scientifique has uncovered eggs with embryos preserved within the body of the animal. It is the oldest example of brood care in the fossil record. 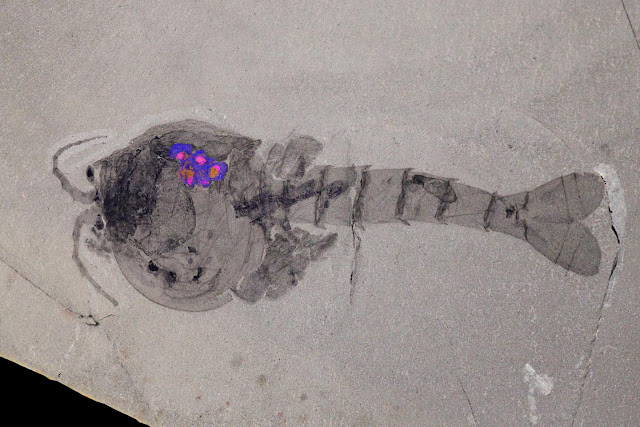 
"As the oldest direct evidence of a creature caring for its offspring, the discovery adds another piece to our understanding of brood care practices during the Cambrian Explosion, a period of rapid evolutionary development when most major animal groups appear in the fossil record," said Jean-Bernard Caron, curator of invertebrate palaeontology at the Royal Ontario Museum and associate professor in the Departments of Earth Sciences and Ecology & Evolutionary Biology at the University of Toronto.

Caron, along with Jean Vannier at the Centre national de la recherche scientifique in Lyon, France, describe the findings in a study published December 17 in Current Biology.

Waptia fieldensis is an early arthropod, belonging to a group of animals that includes lobsters and crayfish. It had a two-part structure covering the front segment of its body near the head, known as a bivalved carapace. Caron and Vannier believe the carapace played a fundamental role in how the creature practised brood care.

Illustration of Waptia fieldensis (middle Cambrian) shows eggs brooded between the inner surface of the carapace and the body.

"Clusters of egg-shaped objects are evident in five of the many specimens we observed, all located on the underside of the carapace and alongside the anterior third of the body," said Caron.

The clusters are grouped in a single layer on each side of the body with no or limited overlapping among the eggs. In some specimens, eggs are equidistant from each other, while in others, some are are closer together, probably reflecting variations in the angle of burial and movement during burial. The maximum number of eggs preserved per per individuals probably reached 24.

"This creature is expanding our perspective on the diversification of brood care in early arthropods," said Vannier, the co-author of the study. "The relatively large size of the eggs and the small number of them, contrasts with the high number of small eggs found previously in another bivalved arthropod known as Kunmingella douvillei. And though that creature predates Waptia by about seven million years, none of its eggs contained embryos."

Kunmingella douvillei also presented a different method of carrying its young, as its eggs were found lower on the body and attached to its appendages.

The presence of these two different parental strategies suggests an independent and rapid evolution of a variety of methods of parental care of offspring. Together with previously described brooded eggs in ostracods from the Upper Ordovician period 450 million years ago, the discovery supports the theory that the presence of a bivalved carapace played a key role in the early evolution of brood care in arthropods.

The research appears in a study titled "Waptia and the diversification of brood care in early arthropods" published in Current Biology. It was supported by a Natural Sciences and Engineering Research Council of Canada Discovery Grant to Jean-Bernard Caron, an ANR (Agence Nationale de la Recherche) Grant to Jean Vannier, and the University of Lyon.