A Community May Benefit from White Lies

Researchers have proved that both too much lying and complete honesty may damage social relationships.

Liars have a central role in building communities and keeping them together. This observation of lying came out in the modelling study conducted by professor Kimmo Kaski and a visiting professor Robin Dunbar from the Department of Computer Science at Aalto University in collaboration with their research colleagues in Mexico.

Examples of a network of one hundred agents and six hundred iterations. The white and black agents are honest, the light blue and dark green ones are liars, and the blue and the red ones have not yet decided. The width of the link describes its strength. 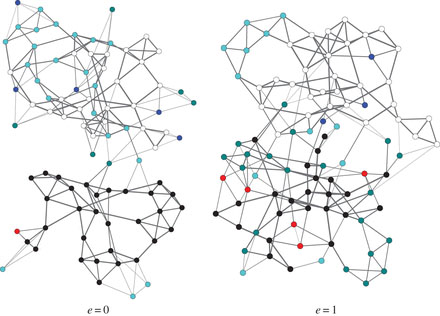 The researchers created a model for illustrating the relationships of agents. A random network of agents was generated arbitrarily deciding their interaction - the links to the other agents.

– In this model the opinion of each agent represents his or her own truth, whereas the general opinion is usually formed on the basis of the average opinion of the community of agents, explains Kimmo Kaski.

– Each agent has a certain number of links, which usually strengthen when both parties are of the same opinion and weaken when they disagree. The link breaks when there is enough disagreement. If this happens, a lying agent tends to avoid seclusion by creating new links, Kaski continues.

According to the researchers, liars play a central role in social networks, because they create new links as well as maintain the old ones, thereby connecting communities with different opinions.

– From the communities' point of view, liars are interesting extroverts. They reach out from their own small communities and build bridges between them and other communities. Sometimes they do not even have their own community or the ties are loose, describes Robin Dunbar.

Not only do white lies support the relationships, they often also delight the victim of the lie. For instance liking a friend's Facebook status update may only mean an expression of encouragement instead of being impressed by the content of the update. On the other hand selfish lying is unsocial and benefits only the liar her/himself. Pathological lying means lying practically to everyone and is usually selfish. Dunbar wants to emphasize that lying works only as people usually tell the truth.

Honesty is our basic assumption and liars take advantage of that. Lying becomes destructive for a community, if there are too many free-riding liars and the trust disappears. On the other hand, if lies are not accepted at all and liars are punished hard, the network splits into smaller and tight-knit communities. In addition, the researchers noticed that the relative amount of liars is smaller when there is no punishment of lying.

– It is crucial that the amount of antisocial liars is small - otherwise the community members do not want to pay the costs of these free-riders and prefer to get rid of them, Dunbar states.

The researchers believe that this new viewpoint to the varying allowance of dishonesty may enhance to optimal and realistic decision-making.