Vitamin B May Counter Negative Effects of Pesticide on Fertility

Women who have adequate levels of B vitamins in their bodies are more likely to get and stay pregnant even when they also have high levels of a common pesticide known to have detrimental reproductive effects, according to new Johns Hopkins Bloomberg School of Public Health research. 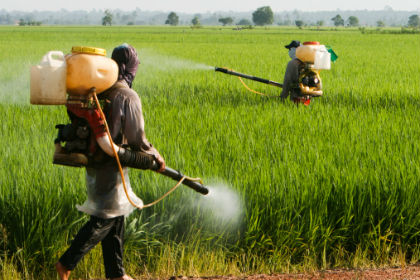 
The findings, published in the December issue of the American Journal of Clinical Nutrition, suggest that B vitamins may have a protective effect that counteracts the levels of DDT in their bodies. DDT, a known endocrine disruptor, is still used to kill mosquitoes in many countries where malaria remains a serious public health concern. The United States banned the pesticide in 1972; China, where the study was conducted, followed suit in 1984. DDT, however, can remain in the body and environment for decades.

“Our previous work has shown that high levels of DDT in the body can increase the risk of early miscarriage,” says study leader Xiaobin Wang, MD, ScD, MPH, the Zanvyl Krieger Professor and Director of the Center on the Early Life Origins of Disease at the Johns Hopkins Bloomberg School of Public Health. “This study tells us that improved nutrition may modify the toxic effects of DDT, by better preparing the body to cope with environmental toxins and stressors. We have shown that women with high levels of DDT who also had high levels of B vitamins had a better chance of getting and staying pregnant than those were deficient in those vitamins.”

The findings suggest that looking at toxins and nutrition in isolation doesn’t paint a full picture of how these different factors intersect. She says studies like this may provide a model for how future research groups can examine the relationship between other toxins and nutrients.

For the study, conducted between 1996 and 1998, Wang and her colleagues recruited and followed a group of female Chinese textile workers who were trying to get pregnant. Every day for up to a year, researchers tested the urine of the women in the study, detecting their levels of hCG the hormone that signals conception. This approach allowed researchers to determine whether a woman was pregnant much earlier than she might normally find out, in the days over even weeks before she realized she’d missed a menstrual period. It also allowed the researchers to determine whether women had an early pregnancy loss (miscarried before six weeks of pregnancy). DDT and DDE (major degraded product of DDT) and B vitamin levels were measured in the women before conception.

A 2003 study by Wang and her colleagues showed that one-third of all conceptions end before women even know they are pregnant. “This is a very vulnerable period,” she says.

Among the 291 women ultimately included in the study, there were 385 conceptions, 31 percent of which were lost before six weeks. Women with high DDT levels and sufficient levels of vitamin B had a 42 percent greater chance of early miscarriage than women with lower DDT levels. But in those with high DDT levels and vitamin B deficiencies, women were twice as likely to suffer a miscarriage before six weeks of gestation. The researchers looked at three types of B vitamins – B-6, B-12 and folic acid – and determined that the risk to a pregnancy was higher with B-12 and folic acid deficiencies and with deficiencies in more than one type of B vitamins.

The researchers also found that women with high DDT and low B vitamin levels took nearly twice as long to conceive in the first place.

The standard of care in many nations is to give an iron-folate supplement to women once they seek prenatal health care, which typically occurs between eight and 12 weeks of gestation, if at all. But that supplement is rarely taken prior to conception, meaning it likely comes too late to prevent early pregnancy loss. And unlike in the United States, where many foods are fortified with folic acid, that is not the norm around the world.

Difficulty conceiving is prevalent in both developed and developing countries. In the United States, the percentage of married women between the ages of 15 and 44 who had difficulty achieving and maintaining pregnancy increased from 8 percent in 1982 to 11.8 percent in 2002, an increase that cannot be completely explained by the age of the women.

Better nutrition – including fortifying foods with B vitamins – in countries where DDT is still in wide use could improve pregnancy outcomes, Wang says. She says there may also be implications in the United States, particularly among women who immigrate from countries where DDT is still common and among low-income women whose diets may not include foods high in B vitamins such as leafy green vegetables and beans. Even women from the United States may have DDT in their systems, which may come from imported foods or even from local food grown in soil still contaminated with DDT.

“Health care providers need to make sure women get adequate micronutrients including B vitamins in their diets not only during pregnancy but before they even conceive,” she says. “Otherwise, we may miss that critical window.”