The Search For Another Earth

Twenty years ago, the first exoplanet discovered around a sun-like star, 51 Pegasi b, made us question what we knew about our universe and launched the search for new worlds. This is the story of the pioneers in planet-hunting and how those who have followed are closer to answering one of humanity’s most ancient questions: Is there life elsewhere in the universe?

51 Pegasi b (abbreviated 51 Peg b), sometimes unofficially named Bellerophon, is an extrasolar planet approximately 50 light-years away in the constellation of Pegasus. 51 Pegasi b was the first planet to be discovered orbiting a main-sequence star,[1] the Sun-like 51 Pegasi, and marked a breakthrough in astronomical research. (The first exoplanet discovery was made by Aleksander Wolszczan in 1992, around pulsar PSR 1257.) It is the prototype for a class of planets called hot Jupiters.

This year, astronomers using the HARPS planet-hunting machine at ESO’s La Silla Observatory in Chile have made the first-ever spectroscopic detection of visible light reflected off an exoplanet. These observations also revealed new properties of this famous object, the first exoplanet ever discovered around a normal star: 51 Pegasi b. The result promises an exciting future for this technique, particularly with the advent of next generation instruments, such as ESPRESSO, on the VLT, and future telescopes, such as the E-ELT.

The exoplanet 51 Pegasi b [1] lies some 50 light-years from Earth in the constellation of Pegasus. It was discovered in 1995 and will forever be remembered as the first confirmed exoplanet to be found orbiting an ordinary star like the Sun [2]. It is also regarded as the archetypal hot Jupiter — a class of planets now known to be relatively commonplace, which are similar in size and mass to Jupiter, but orbit much closer to their parent stars.

This artist’s view shows the hot Jupiter exoplanet 51 Pegasi b, sometimes referred to as Bellerophon, which orbits a star about 50 light-years from Earth in the northern constellation of Pegasus (The Winged Horse). This was the first exoplanet around a normal star to be found in 1995. Twenty years later this object was also the first exoplanet to be be directly detected spectroscopically in visible light. 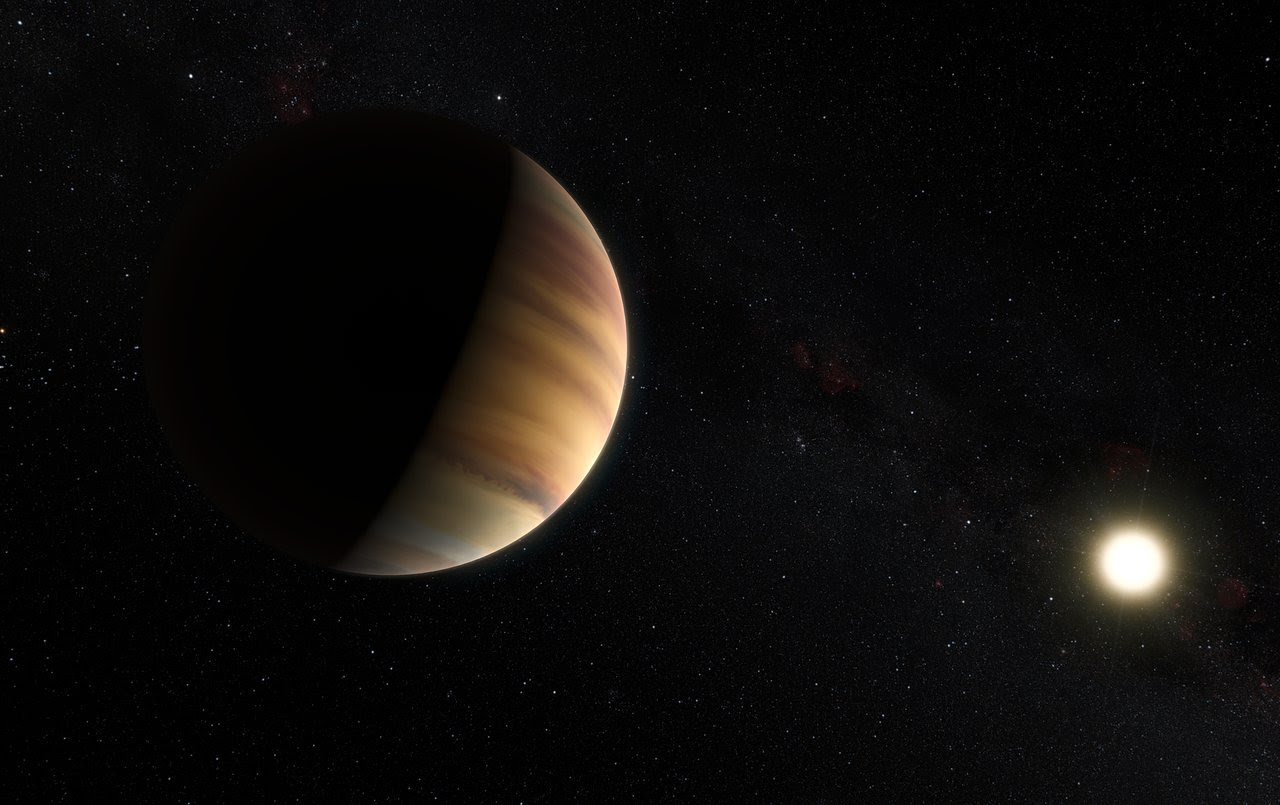 Since that landmark discovery, more than 1900 exoplanets in 1200 planetary systems have been confirmed, but, in the year of the twentieth anniversary of its discovery, 51 Pegasi b returns to the ring once more to provide another advance in exoplanet studies.

The team that made this new detection was led by Jorge Martins from the Instituto de Astrofísica e Ciências do Espaço (IA)and the Universidade do Porto, Portugal, who is currently a PhD student at ESO in Chile. They used the HARPS instrument on the ESO 3.6-metre telescope at the La Silla Observatory in Chile.

Currently, the most widely used method to examine an exoplanet’s atmosphere is to observe the host star’s spectrum as it is filtered through the planet’s atmosphere during transit — a technique known as transmission spectroscopy. An alternative approach is to observe the system when the star passes in front of the planet, which primarily provides information about the exoplanet’s temperature.

The new technique does not depend on finding a planetary transit, and so can potentially be used to study many more exoplanets. It allows the planetary reflected light spectrum to be directly detected in visible light, which means that different characteristics of the planet that are inaccessible to other techniques can be inferred.

The host star’s spectrum is used as a template to guide a search for a similar signature of light that is expected to be reflected off the planet as it describes its orbit. This is an exceedingly difficult task as planets are incredibly dim in comparison to their dazzling parent stars.

The signal from the planet is also easily swamped by other tiny effects and sources of noise [3]. In the face of such adversity, the success of the technique when applied to the HARPS data collected on 51 Pegasi b provides an extremely valuable proof of concept.

Jorge Martins explains: “This type of detection technique is of great scientific importance, as it allows us to measure the planet’s real mass and orbital inclination, which is essential to more fully understand the system. It also allows us to estimate the planet’s reflectivity, or albedo, which can be used to infer the composition of both the planet’s surface and atmosphere.”

51 Pegasi b was found to have a mass about half that of Jupiter’s and an orbit with an inclination of about nine degrees to the direction to the Earth [4]. The planet also seems to be larger than Jupiter in diameter and to be highly reflective. These are typical properties for a hot Jupiter that is very close to its parent star and exposed to intense starlight.

HARPS was essential to the team’s work, but the fact that the result was obtained using the ESO 3.6-metre telescope, which has a limited range of application with this technique, is exciting news for astronomers. Existing equipment like this will be surpassed by much more advanced instruments on larger telescopes, such as ESO’s Very Large Telescope and the future European Extremely Large Telescope [5].

"We are now eagerly awaiting first light of the ESPRESSO spectrograph on the VLT so that we can do more detailed studies of this and other planetary systems,” concludes Nuno Santos, of the IA and Universidade do Porto, who is a co-author of the new paper [6].