A large team of scientists has nearly completed the first map of the mantle under the tectonic plate that is colliding with the Pacific Northwest and putting Seattle, Portland and Vancouver at risk of the largest earthquakes and tsunamis in the world.  The Juan de Fuca plate is first tectonic plate to be mapped from midocean ridge to subduction zone.

A new report from five members of the mapping team describes how the movement of the ocean-bottom Juan de Fuca plate is connected to the flow of the mantle 150 kilometers (100 miles) underground, which could help seismologists understand the forces generating quakes as large as the destructive Tohoku quake that struck Japan in 2011.


The Juan de Fuca and Gorda plates offshore of the Pacific Northwest. The plate moves eastward from the midocean ridge and spreading center on the plate's western edge to the trench on the eastern margin where the plate subducts under the North American plate. The Cascadia subduction zone is capable of generating magnitude 9 quakes, which can also produce deadly tsunamis. 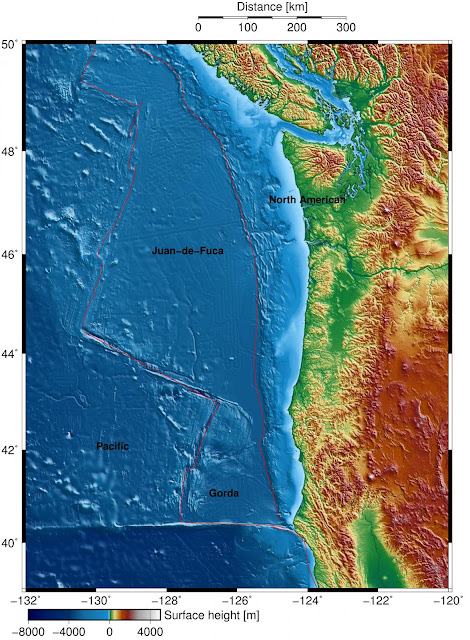 "This is the first time we've been able to map out the flow of mantle across an entire plate, so as to understand plate tectonics on a grand scale," said Richard Allen, a professor and chair of earth and planetary science at the University of California, Berkeley, and the senior author of a paper published online Nov. 2 in the journal Nature Geoscience. "Our goal is to understand large-scale plate tectonic processes and start to link them all the way down to the smallest scale, to specific earthquakes in the Pacific Northwest."

The major surprise, Allen said, is that the mantle beneath a small piece of the Juan de Fuca plate is moving differently from the rest of the plate, resulting in segmentation of the subduction zone. Similar segmentation is seen in Pacific Northwest megaquakes, which don't always break along the entire 1,000-kilometer (600-mile) length, producing magnitude 9 or greater events. Instead, it often breaks along shorter segments, generating quakes of magnitude 7 or 8.

The Juan de Fuca plate offshore of Oregon, Washington and British Columbia is small - about the size of California and 50-70 kilometers thick - but "big enough to generate magnitude 9 earthquakes" as it's shoved under the continental North American plate, Allen said. Because of the hazard from this so-called Cascadia Subduction Zone, a recent New Yorker article portrayed the area as a disaster waiting to happen, predicting that "an earthquake will destroy a sizable portion of the coastal Northwest."

But little is known about the tectonic plates submerged under the oceans, how they are linked to processes inside the earth, such as the melted mantle rock underlying them, or how the crust and mantle interact to cause megathrust earthquakes at subductions zones.

The Juan de Fuca plate is one of seven major and dozens of minor plates that cover the earth like a jigsaw puzzle, pushed around by molten rock rising at mid-ocean ridges and, at their margins, diving under other plates or ramming into them to generate mountain ranges like the Himalayas. The largest of Earth's tectonic plates, the Pacific Plate, is moving eastward and plunging under the entire western edge of the Americas, creating a "ring of fire" dotted with volcanoes and mountain ranges and imperiled by earthquakes.

Until now, however, scientists have deployed only a handful of seismometers on the seabed worldwide to explore the mantle underlying these plates, said Allen, who also is director of the Berkeley Seismological Laboratory and one of the co-principal investigators for the $20 million Cascadia Initiative. Led by the University of Oregon, the initiative is funded by the National Science Foundation to develop new underwater and on-shore seismic instruments to measure the plate's interaction with the mantle or asthenosphere, and monitor quake and volcanic activity at the trench off the coast where the Juan de Fuca plate subducts under the North American plate.

"The experiment was unprecedented in that there were 70 seismometers deployed at a time, sitting there for 10 months, which is much bigger than any other ocean-bottom experiment ever done before," said Robert Martin-Short, a UC Berkeley graduate student and first author of the paper. "We've learned a lot from the deployment of these new instruments, and now have a giant array that we know works well on the seafloor and which we can move somewhere else in the future for a similar experiment."

While the deployment of seismometers at 120 sites on the ocean floor was a technical challenge, Allen said, "the offshore environment is much simpler, the plates are thinner and more uniform than continental plates and we can see through them to get a better sense of what is going on beneath."

Since 2012, the team has made 24 two-week ocean voyages to place and retrieve the seabed seismometers, providing dozens of students - undergraduates and graduate students from UC Berkeley, Columbia University, the universities of Oregon and Washington, and Imperial College in the UK - an opportunity to participate in field research. The last of the seabed seismometers were pulled up this month and the data is being prepared for analysis.

Based on the first three years of data, Allen and his team confirmed what geophysicists suspected. At the mid-ocean Juan de Fuca ridge about 500 kilometers (300 miles) offshore of Seattle - the western edge of the Juan de Fuca plate - the flow of the mantle below the plate is perpendicular to the ridge, presumably because the newly formed plate drags the underlying mantle eastward with it.

As the plate moves away from the ridge, the mantle flow rotates slightly northward toward the trench. At its eastern margin, the plate and underlying mantle move in alignment, perpendicular to the subduction zone, as expected. Presumably, the subducted portion of the plate deep under the trench is pulling the massive plate downward at the same time that the emerging lava at the mid-ocean spreading ridge is elevating the plate and pushing it eastward.

Allen and his colleagues found, however, that a part of the Juan de Fuca plate called the Gorda Plate, located off the northern California coast, is not coupled to the mantle, leaving the mantle beneath Gorda to move independently of the plate above. Instead, the Gorda mantle seems to be aligned with the mantle moving under the Pacific plate.

"The Juan de Fuca plate is clearly influencing the flow of the mantle beneath it, but the Gorda Plate is apparently too small to affect the underlying mantle," he said.

This change in mantle flow produces a break or discontinuity in the forces on the plate, possibly explaining segmentation along the subduction zone.

"When you look at earthquakes in Cascadia, they sometimes break just along the southern segment, sometimes on the southern two-thirds, and sometimes along the entire length of the plate," Allen said. "The change in the mantle flow could be linked to that segmentation."

The Cascadia Initiative is a community experiment designed by the research community with all data immediately available to the public. NSF funded the project with money it received through the 2009 stimulus or American Recovery and Reinvestment Act (ARRA). Eleven scientists, including Allen, from across the U.S. formed the Cascadia Initiative Expedition Team responsible for the offshore seismic deployment.

Allen and Martin-Short's co-authors on the Nature Geosciences paper are Ian Bastow and Eoghan Totten of Imperial College and UC Berkeley geophysicist Mark Richards, a professor of earth and planetary science. Richards helped develop the geodynamic model of the interaction between the plate and the mantle that explains how the faster moving Pacific Plate could override the influence that the Gorda Plate has on the mantle below.