Researchers using NASA's Fermi Gamma-ray Space Telescope have discovered the first gamma-ray pulsar in a galaxy other than our own. The object sets a new record for the most luminous gamma-ray pulsar known.

Explore Fermi's discovery of the first gamma-ray pulsar detected in a galaxy other than our own.

The pulsar lies in the outskirts of the Tarantula Nebula in the Large Magellanic Cloud, a small galaxy that orbits our Milky Way and is located 163,000 light-years away. The Tarantula Nebula is the largest, most active and most complex star-formation region in our galactic neighborhood. It was identified as a bright source of gamma rays, the highest-energy form of light, early in the Fermi mission. Astronomers initially attributed this glow to collisions of subatomic particles accelerated in the shock waves produced by supernova explosions.

"It's now clear that a single pulsar, PSR J0540-6919, is responsible for roughly half of the gamma-ray brightness we originally thought came from the nebula," said lead scientist Pierrick Martin, an astrophysicist at the National Center for Scientific Research (CNRS) and the Research Institute in Astrophysics and Planetology in Toulouse, France. "That is a genuine surprise."

NASA's Fermi Gamma-ray Space Telescope has detected the first extragalactic gamma-ray pulsar, PSR J0540-6919, near the Tarantula Nebula (top center) star-forming region in the Large Magellanic Cloud, a satellite galaxy that orbits our own Milky Way. Fermi detects a second pulsar (right) as well but not its pulses. PSR J0540-6919 now holds the record as the highest-luminosity gamma-ray pulsar. The angular distance between the pulsars corresponds to about half the apparent size of a full moon. Background: An image of the Tarantula Nebula and its surroundings in visible light. 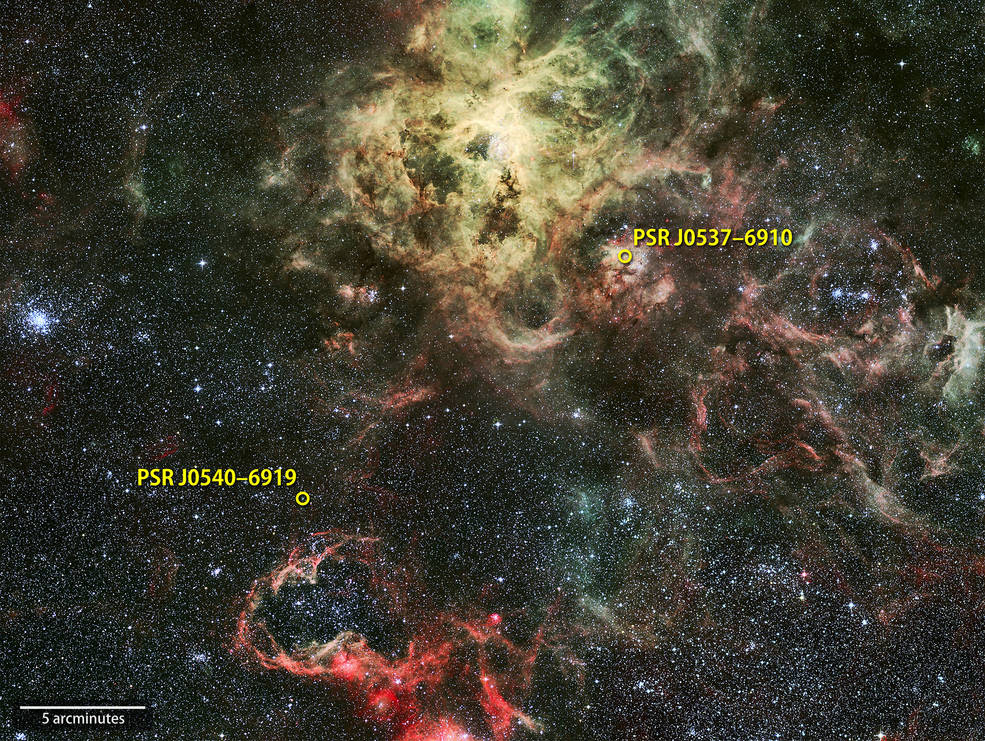 When a massive star explodes as a supernova, the star's core may survive as a neutron star, where the mass of half a million Earths is crushed into a magnetized ball no larger than Washington, D.C. A young isolated neutron star spins tens of times each second, and its rapidly spinning magnetic field powers beams of radio waves, visible light, X-rays and gamma rays. If the beams sweep past Earth, astronomers observe a regular pulse of emission and the object is classified as a pulsar. 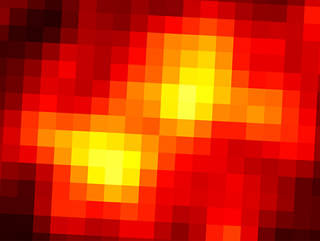 Nevertheless, it took more than six years of observations by Fermi's Large Area Telescope (LAT), as well as a complete reanalysis of all LAT data in a process called Pass 8, to detect gamma-ray pulsations from J0540. The Fermi data establish upper limits for gamma-ray pulses from J0537 but do not yet detect them.

Martin and his colleagues present these findings in a paper to be published in the Nov. 13 edition of the journal Science.

"The gamma-ray pulses from J0540 have 20 times the intensity of the previous record-holder, the pulsar in the famous Crab Nebula, yet they have roughly similar levels of radio, optical and X-ray emission," said coauthor Lucas Guillemot, at the Laboratory for Physics and Chemistry of Environment and Space, operated by CNRS and the University of Orléans in France. "Accounting for these differences will guide us to a better understanding of the extreme physics at work in young pulsars."

Despite J0540's luminosity, too few gamma rays reach the LAT to detect pulsations without knowing the period in advance. This information comes from a long-term X-ray monitoring campaign using RXTE, which recorded both pulsars from the start of the Fermi mission to the end of 2011, when RXTE operations ceased.

"This campaign began as a search for a pulsar created by SN 1987A, the closest supernova seen since the invention of the telescope," said co-author Francis Marshall, an astrophysicist at NASA's Goddard Space Flight Center in Greenbelt, Maryland. "That search failed, but it discovered J0537."

Prior to the launch of Fermi in 2008, only seven gamma-ray pulsars were known. To date, the mission has found more than 160.