New research led by physicists at the University of Warwick has used tools designed to study social networks to gain significant new insights into the Northern Lights, and space weather - particularly the interaction of events in the sun's atmosphere with Earth's ionosphere.

New research led by physicists at the University of Warwick has used tools designed to study social networks to gain significant new insights into the Northern Lights, and space weather -- particularly the interaction of events in the sun's atmosphere with Earth's ionosphere.

The research team used data from over 100 individual magnetometers located at high latitudes in the northern hemisphere. These magnetometers have been used for decades to track space weather but it is only recently that the data from all these devices has been collected in one place in the SuperMAG project.

University of Warwick researcher Professor Sandra Chapman, one of the lead researchers, on the paper said:

"The new SuperMAG data collection opened up the possibility of finding patterns of correlation between each pair of all of the magnetometers, and studying how this changes in time. We found ways of overcoming the challenges of the irregular distribution of the magnetometers and the different conditions at each site but what we were most excited about was our idea of trying to apply techniques normally used to study social networks of people to this network of magnetometers."

'This analysis really shows what can be done when data from different international observatories can be brought together in one place, which is what superMAG is all about. The data has been 'out there' for decades but only now it has been brought together we can perform analyses like this one to see the detailed patterns in how space weather maps out on the ground' 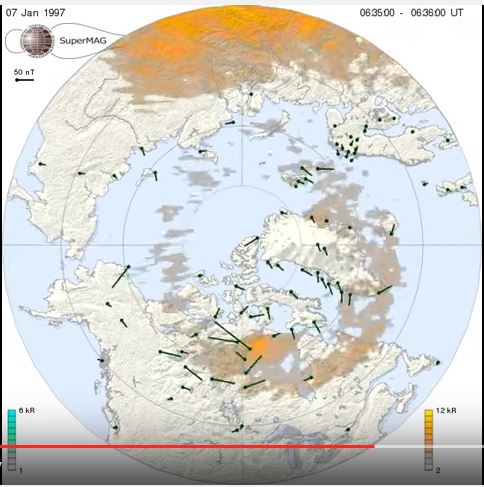 "By constructing a network, we quantify all the rich and detailed evolution of a space weather event in space and time. The power of the network approach is then that all this detail can be captured in a few numbers. This means that in the future we can compare hundreds of space weather events and see how they differ and what they have in common- just as businesses seek to categorise their thousands of customers to find out what goods and services they want. The major step forward is to go from structurally simple data, for example, do two customers like the same item? (a simple yes or no) to real world observations i.e. are these two magnetometers seeing the same thing? "

The research entitled "Network analysis of geomagnetic substorms using the SuperMAG database of ground-based magnetometer stations" has just been published in the Journal of Geophysical Research: Space Physics by a team of researchers from the Centre for Fusion, Space and Astrophysics in the Department of Physics at the University of Warwick; The Department of Physics and Technology, University of Bergen, Bergen, Norway; and The Johns Hopkins University Applied Physics Laboratory, Laurel, Maryland, USA.

Contacts and sources:
Tom Frew
University of Warwick
on November 03, 2015